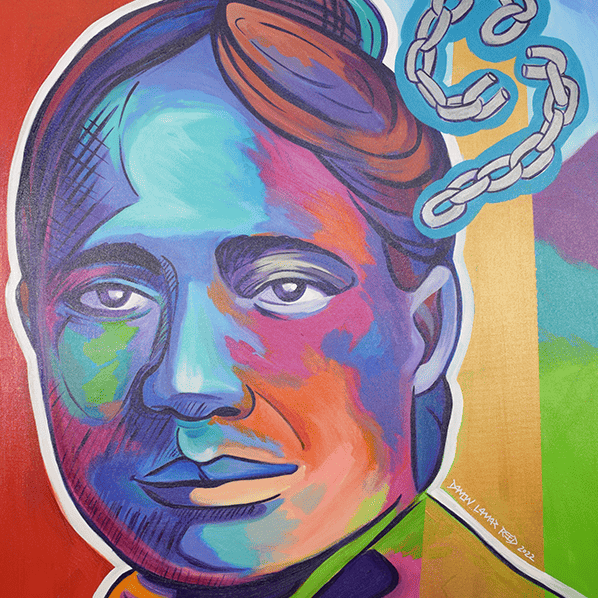 Orphaned at age three, Frances Ellen Watkins Harper learned about abolition and advocacy from her aunt and uncle in Maryland. As an adult, she traveled to work as a schoolteacher, but was  barred from returning to Maryland when the state passed a bill that prohibited free African Americans entry. Unable to return home, Harper turned her attention to the antislavery movement. An avid poet, Harper began submitting her work to Frederick Douglass’ Paper and published two volumes of poetry, Forest Leaves (1846) and Poems on Miscellaneous Subjects (1854). Her publication of The Two Offers (1859) made her the first African American woman to publish a short story. She worked as a guest lecturer for various anti-slavery societies and was a prominent speaker at the 1866 Seneca Falls Women’s Rights Convention. Today, Harper is celebrated as a leading antislavery suffragette.

This acrylic portrait was painted by Damon Reed.

There’s truth to the saying that a picture is worth a thousand words.  Artist Damon Lamar Reed brings that truth to reality.  He learned early on, that regardless of the medium, his purpose was to inspire. Damon often says, “I paint raps and I rap paintings.” His goal is to create messages that reach the depth of the human condition.