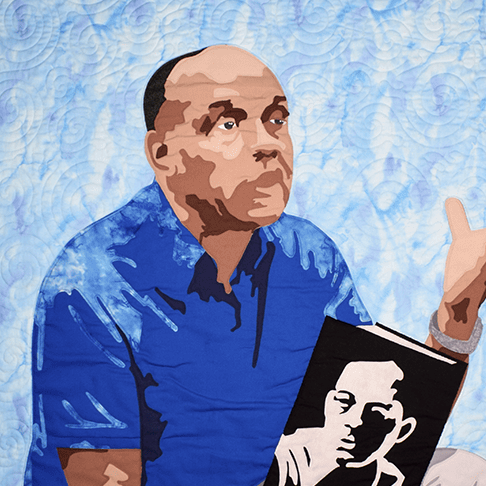 Ralph Ellison was a writer whose life experiences informed his work and made them richer. Ellison was born in Oklahoma City, and was raised by his single mother after her husband died. From an early age, he had a love of music and wanted to become a composer. He studied music at what is now Tuskegee University for three years before moving to New York City. In New York, he became good friends with Richard Wright, who pushed him to write. He served in the military during World War II, and published Invisible Man in 1953 after returning from the war. The novel established him as an important literary figure, but was the only novel he published in his lifetime. After his death, a second novel and a collection of short stories was published.

This quilt was designed by Dorothy Burge and machine quilted by Judy Wolff.

Dorothy Burge is a quiltavist, a person who does quilting and activism together. She is a fabric and multimedia artist and community activist who is inspired by history and current issues of social justice. Burge’s ancestors created beautiful quilts from recycled clothing. Her realization that the history and culture of her people were being passed in the form of quilt art inspired her to use this medium as a tool to teach history, raise cultural awareness, and inspire action.