A Nation of Writers: John and Cathie Estey

A Nation of Writers celebrates the breadth and depth of writing in the United States with an interactive timeline spanning over 400 years, a surprise bookshelf which allows visitors to engage all 5 senses, an amazing Word Waterfall, and more!

A Nation of Writers

American Voices
English is our de facto national language, a legacy of colonization. Yet today’s Americans speak more than 350 languages, a reflection of the nation’s immigrant history and the enduring presence of our indigenous people. Given such diversity, is it possible to say that there is a single American literature, a body of work with a distinctive character? In a word, yes.

The 100 authors featured here represent the evolution and flourishing of American writing. Writers of the 1600s and 1700s borrowed forms and themes from Europe, applying them to New World settings and issues. Then, over the course of the 1800s, a new, democratic style emerged, rooted in the way Americans talked and thought. Previously underrepresented voices began to be heard, culminating with an explosion of perspectives in the modern era. Taken together, this rich literary heritage reflects America in all of its complexity: its energy, hope, conflict, disillusionment, and creativity. 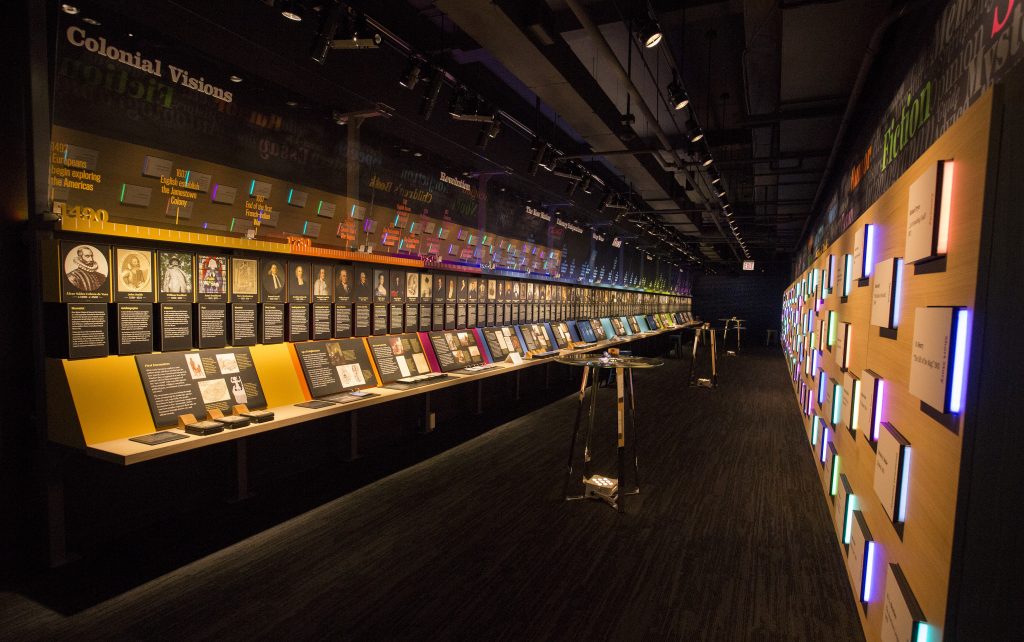 Many Writers, Many Forms
Memorable writing can be long or short, fact or fiction. A clever advertising tagline can linger in our collective consciousness. A stanza-length poem can convey a world of emotion. A multivolume biography can offer a nuanced, faceted portrait of a single individual. A novel can sweep us away to another place and time.

This wall features 100 works representing dozens of writing categories. How many titles do you recognize? Are any new to you? Open the doors to uncover intriguing insights into these American treasures. Prepare to be surprised! 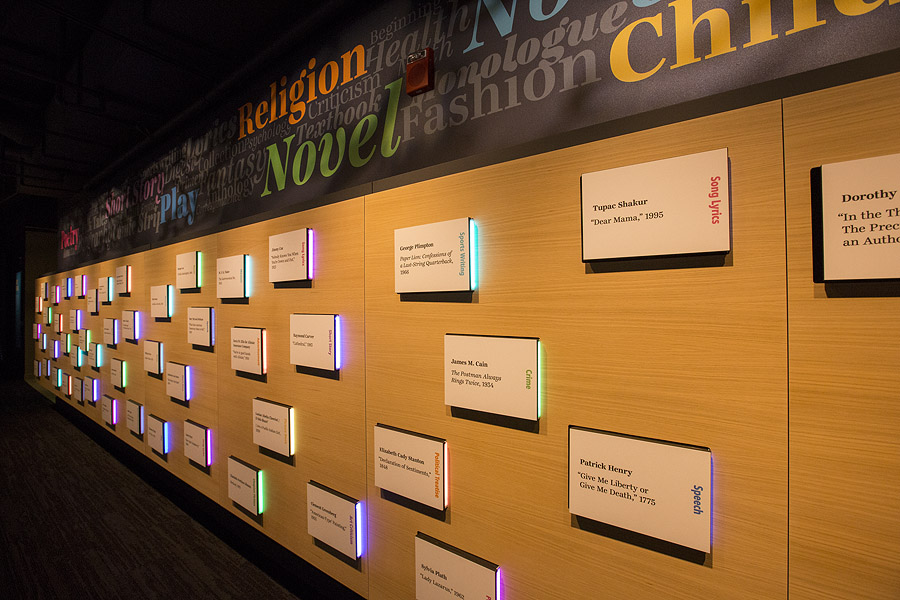 Surprise Bookshelf
This exhibit wall will present a series of stunning, illuminated boxes, each showcasing samples of great American writing. Visitors slide the lit box to the side to discover something exciting about the work and its author, including music, videos, photos and more. 100 writers, spanning a broad sweep of genres and media, from poets and science fiction authors to sports writers and song writers, are featured side-by-side on a rotating basis. 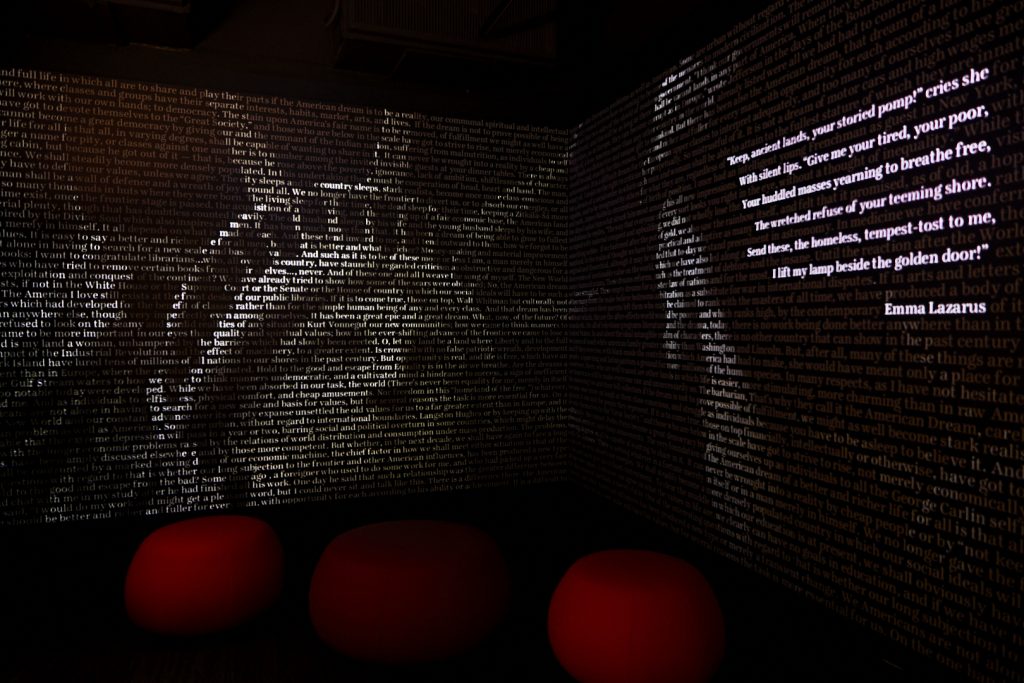 Word Waterfall: A gift of James and Carol Hansen
Writers have long debated American-ness. What does American mean? What does it mean to be an American? How should we interpret the promise of the Declaration of Independence, which asserts our right to “life, liberty, and the pursuit of happiness”? How have we failed or succeeded at ensuring equality for all? What do we love about this country? Is the United States of America truly exceptional?

This immersive experience offers just a few perspectives on the meaning of America. 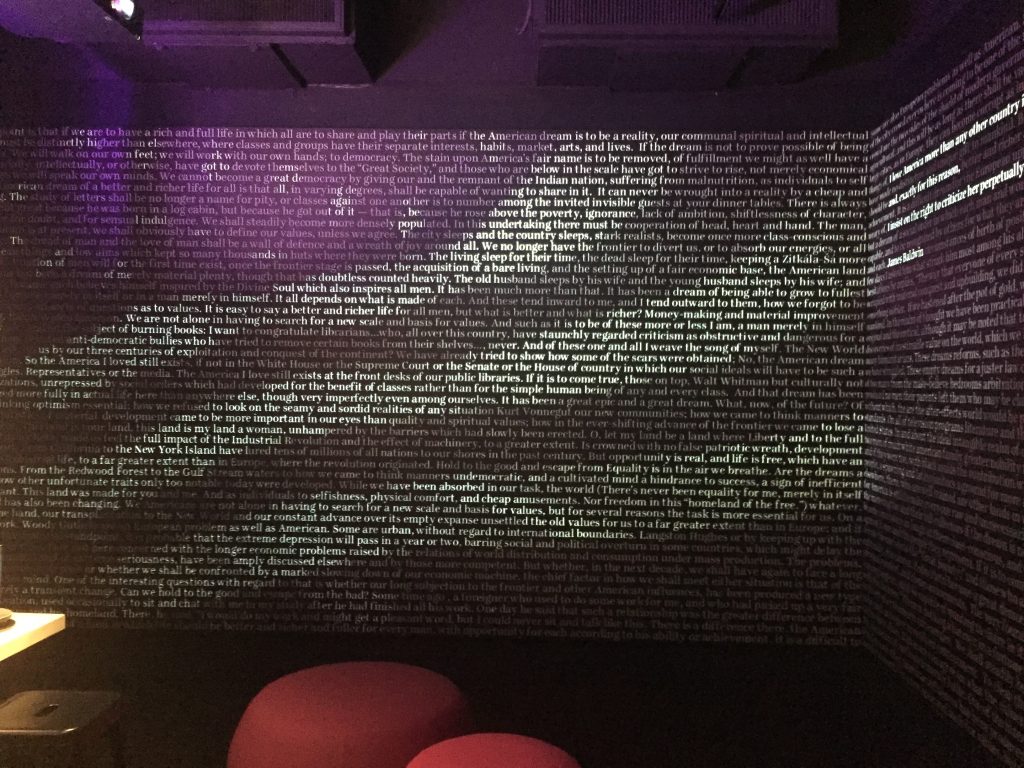 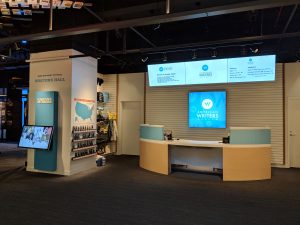 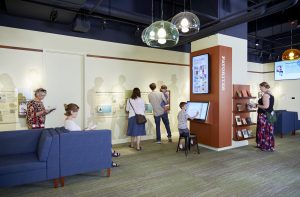 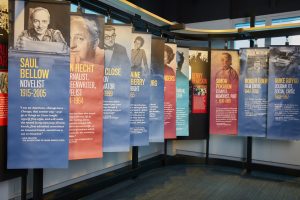 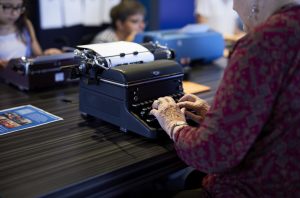 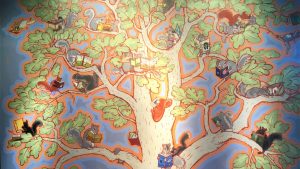