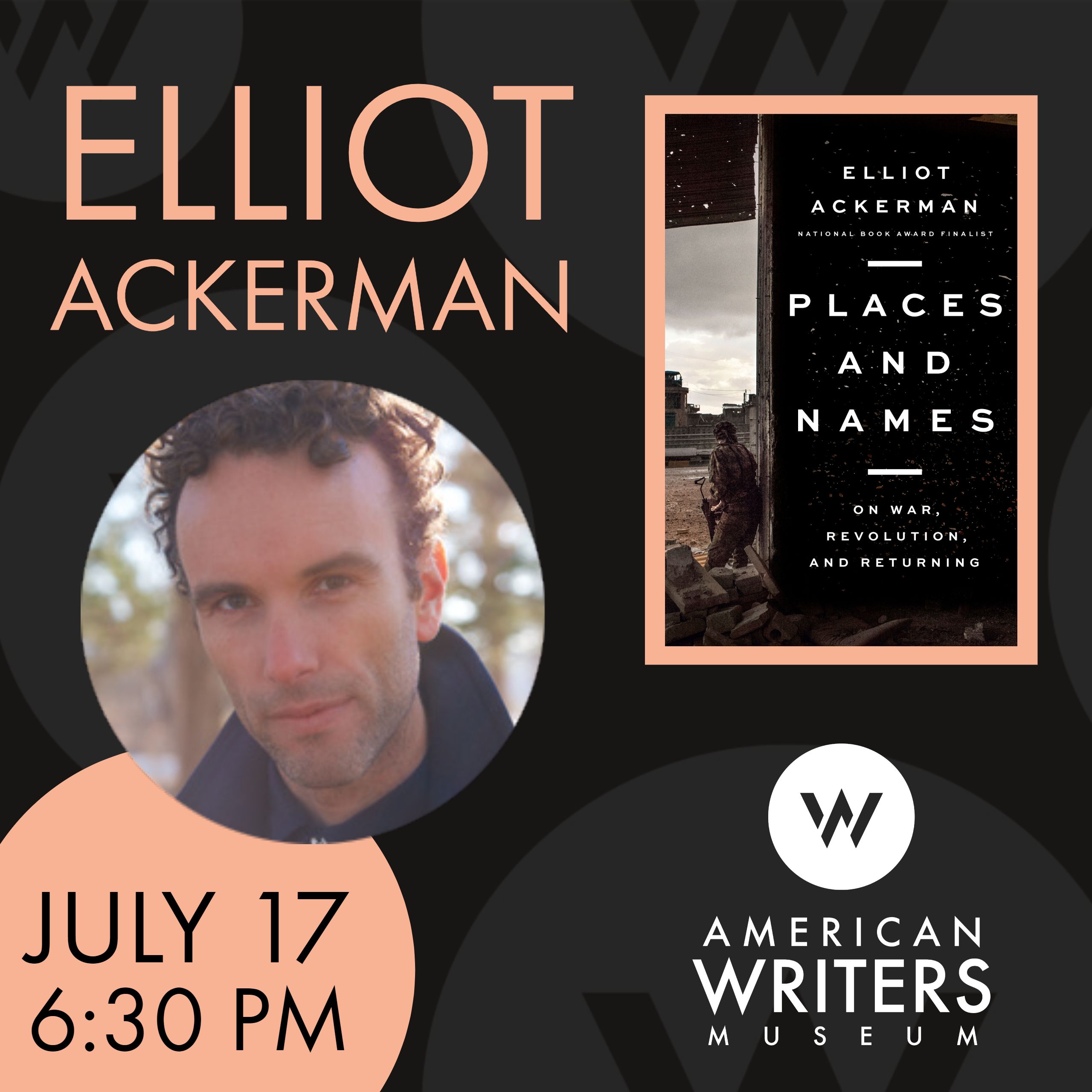 Marine war veteran and National Book Award finalist Elliot Ackerman presents his new memoir Places and Names, an astonishing reckoning with the nature of combat and the human cost of the wars in Iraq, Afghanistan and Syria. Ackerman is joined by Army veteran Peter Meijer, who now works with the bipartisan organization With Honor to help veterans get elected to public office. Books will be sold and signed at the program.

ABOUT PLACES AND NAMES:

By moving back and forth between his recent experiences on the ground as a journalist in Syria and its environs and his deeper past in combat in Iraq and Afghanistan, Ackerman creates a work of astonishing atmospheric pressurization. He shares extraordinarily vivid and powerful stories of his own experiences in battle, culminating in the events of the Second Battle of Fallujah, the most intense urban combat for the Marines since Hue in Vietnam, where Ackerman’s actions leading a rifle platoon saw him awarded the Silver Star. He weaves these stories into the latticework of a masterful larger reckoning, with contemporary geopolitics through his vantage as a journalist in Istanbul and with the human extremes of both bravery and horror.

At once an intensely personal book about the terrible lure of combat and a brilliant meditation on the larger meaning of the past two decades of strife for America, the region and the world, Places and Names bids fair to take its place among our greatest books about modern war.

Elliot Ackerman is the author of the novels Waiting for Eden, Green on Blue, and Dark at the Crossing, which was a finalist for the National Book Award. His writings have appeared in Esquire, The New Yorker, The Atlantic, and The New York Times Magazine, among other publications, and his stories have been included in The Best American Short Stories and The Best American Travel Writing. He is both a former White House Fellow and Marine, and served five tours of duty in Iraq and Afghanistan, where he received the Silver Star, the Bronze Star for Valor, and the Purple Heart. He divides his time between New York City and Washington, D.C.

As a non-commissioned Army officer, Meijer served in Operations Iraqi Freedom and New Dawn from the summer of 2010 to the summer of 2011. He spent his time in Iraq embedded with the Iraqi Army as a combat advisor at Joint Security Stations in the Baghdad area, conducting bilateral training missions and force protection operations. Meijer holds a Bachelor of Arts degree in Anthropology and Political Science from Columbia University. Originally from Grand Rapids, Michigan, he grew up at the center of two family businesses, School Zone Publishing and Meijer, Inc. Supercenters. Meijer is also a member of the Cape Eleuthera Island School Alumni Advisory Board and an advisor to the Kettering Foundation and Gerald R. Ford Museum, as well as a Board Member of Student Veterans of America. Meijer continues to serve as a squad leader in the US Army Reserves.