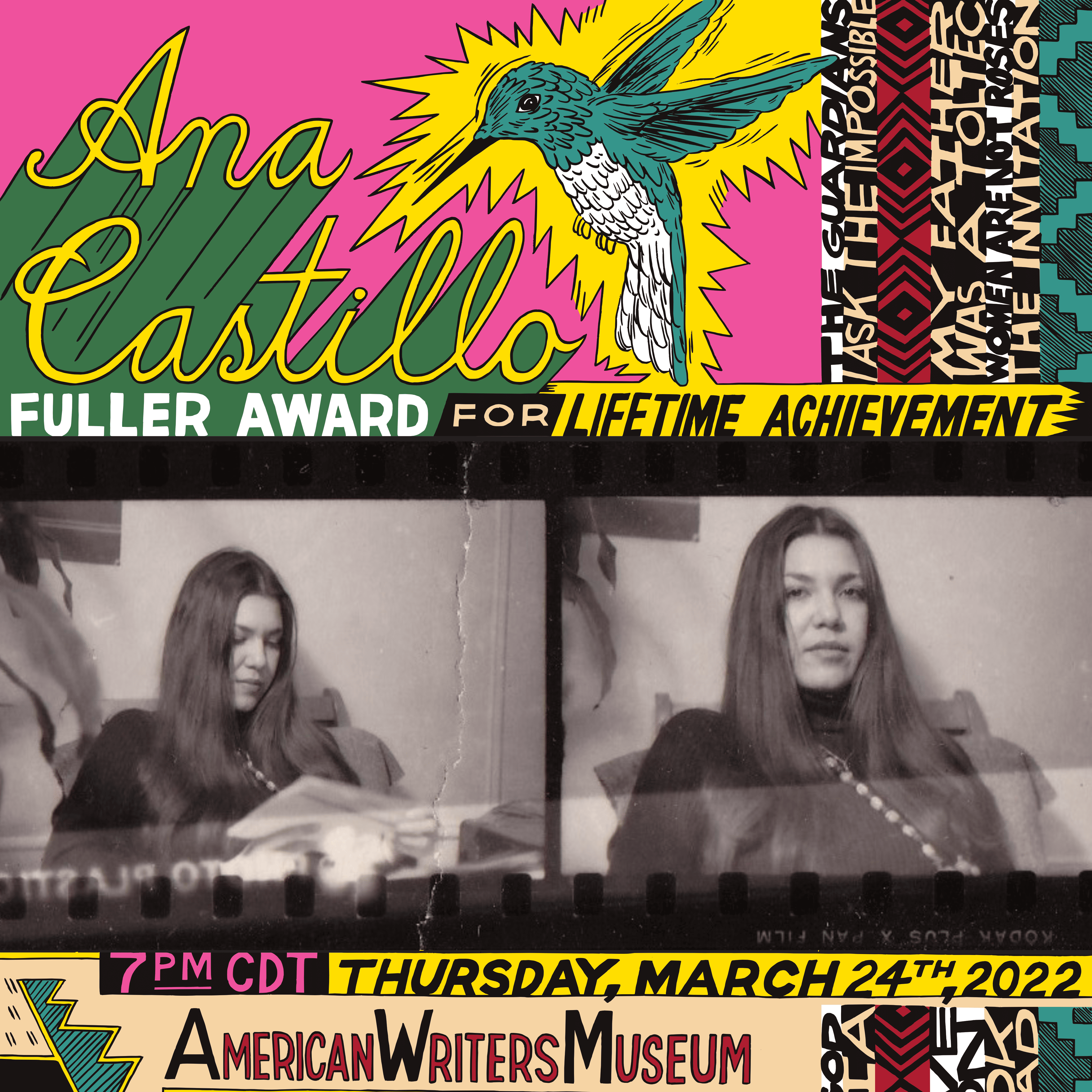 Acclaimed author Ana Castillo will be awarded the Chicago Literary Hall of Fame’s Fuller Award for her lifetime achievement as an author, activist, educator, and scholar. She joins an illustrious list of 11 other Chicago writers to receive the award. This is an in-person event held at the American Writers Museum. Proof of vaccination along with a valid ID are required to enter. Masks that cover your nose and mouth are also required throughout the American Writers Museum regardless of vaccination status. This program will also be livestreamed, register for the live online broadcast here. 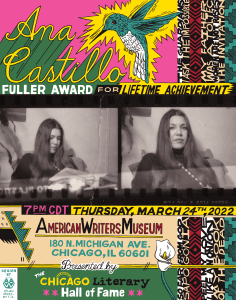 More about the event:

Poet Mark Turcotte will emcee the ceremony; author Sandra Jackson-Okopu and scholar Jane Hseu will be among the speakers; actor/director Henry Godinez will perform a reading; and author/publisher Christine Rice will lead a conversation with Ana. In addition to the American Writers Museum, several partners will present the award alongside the Chicago Literary Hall of Fame, including the Guild Literary Complex, DePaul University, Dominican University, Hypertext Magazine, and Hilton/Asmus Contemporary.

Castillo (June 15, 1953-) is a celebrated and distinguished poet, novelist, short story writer, essayist, editor, playwright, translator and independent scholar. Castillo was born and raised in Chicago. She has contributed to periodicals and online venues (Salon and Oxygen) and national magazines, including More and the Sunday New York Times. Castillo’s writings have been the subject of numerous scholarly investigations and publications.

Among her award winning, bestselling titles: novels include So Far From God, The Guardians and Peel My Love like an Onion; poetry collections include My Book of the Dead, I Ask the Impossible, My Father Was a Toltec, Women Are Not Roses, and The Invitation. Her novel, Sapogonia was a New York Times Notable Book of the Year. She has been profiled and interviewed on National Public Radio and the History Channel and was a radio essayist with NPR in Chicago. Ana Castillo is editor of La Tolteca 2.0 on her blog, an arts and literary zine, which features creatives of all backgrounds, while focusing on the marginalized.

In 2020 Castillo was the recipient of the Northeastern Illinois University Distinguished Alumnus Award, the highest alumni honor the University bestows. In 2014 Dr. Castillo held the Lund-Gil Endowed Chair at Dominican University, River Forest, IL and served on the faculty with Bread Loaf Summer Program (Middlebury College) in 2015 and 2016. She also held the first Sor Juana Inés de la Cruz Endowed Chair at DePaul University 2001-06, The Martin Luther King, Jr Distinguished Visiting Scholar post at M.I.T. and was the Poet-in-Residence at Westminster College in Utah in 2012, among other teaching posts throughout her extensive career. Castillo holds an M.A. from the University of Chicago and a Ph.D., University of Bremen, Germany in American Studies and an honorary doctorate from Colby College. She received an American Book Award from the Before Columbus Foundation for her first novel, The Mixquiahuala Letters.

Among her other awards she is the recipient of a Carl Sandburg Award and fellowships from the National Endowment for the Arts in fiction and poetry.