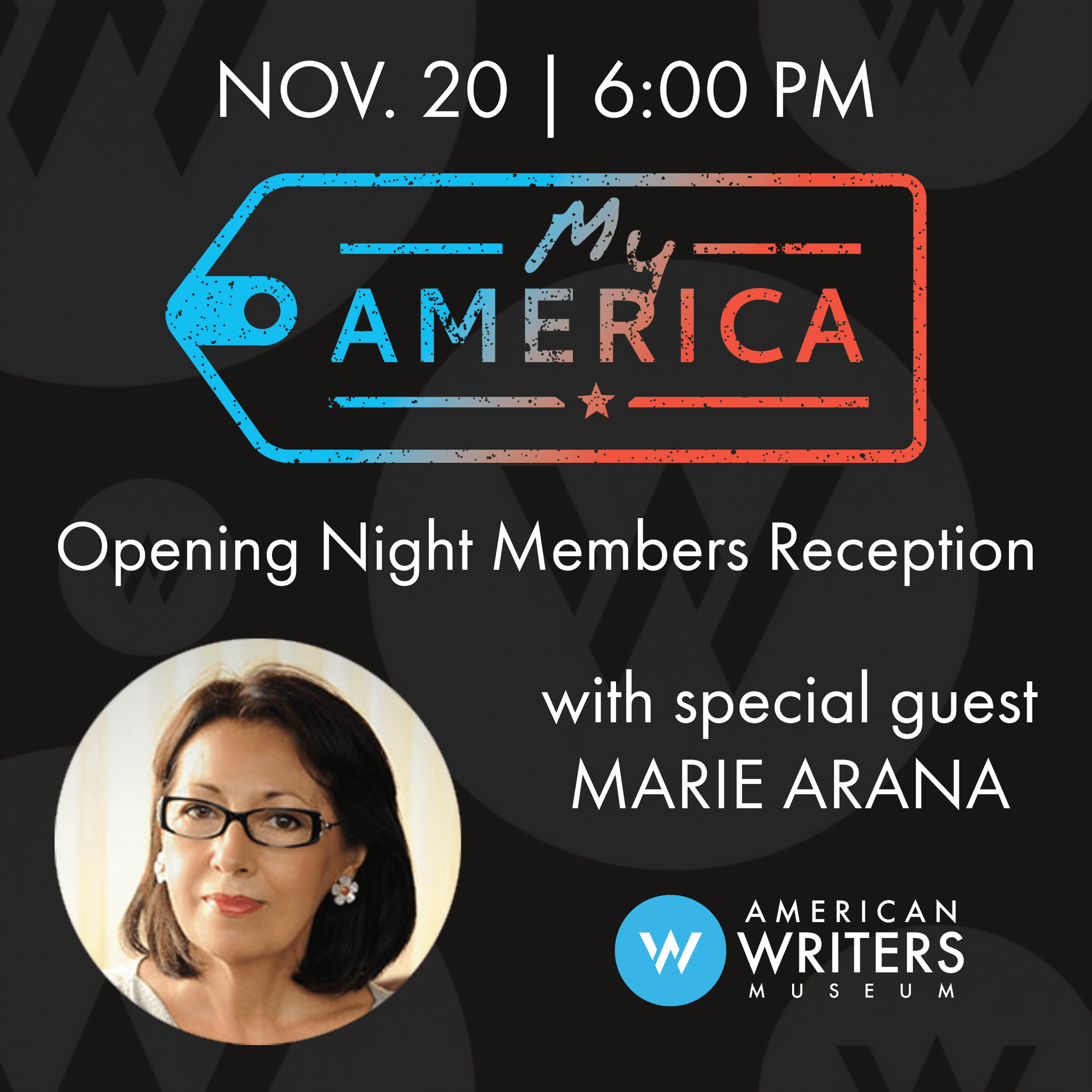 Join us for the opening reception of our newest exhibit My America: Immigrant and Refugee Writers Today on November 20 at 6:00 pm. Featuring more than 30 writers from around the world, My America celebrates and honors the invaluable contributions modern immigrant and refugee writers have made to our culture, history, and daily lives. The authors featured in My America delve into questions about writing influences, being multilingual, community, family, and what it means to be American. Explore the new exhibit while enjoying drinks and light refreshments. Then hear from acclaimed writer and member of the My America curating team MARIE ARANA, as she presents her new book Silver, Sword, and Stone: Three Crucibles in the Latin American Story.

This event is a reception for MEMBERS ONLY. If you’re not a member, join today! If you are a member but have not yet received your electronic invitation, please email membership@americanwritersmuseum.org with any questions you have.

About Silver, Sword, and Stone:

Leonor Gonzales lives in a tiny community perched 18,000 feet above sea level in the Andean cordillera of Peru, the highest human habitation on earth. Like her late husband, she works the gold mines much as the Indians were forced to do at the time of the Spanish Conquest. Illiteracy, malnutrition, and disease reign as they did five hundred years ago. And now, just as then, a miner’s survival depends on a vast global market whose fluctuations are controlled in faraway places.

Carlos Buergos is a Cuban who fought in the civil war in Angola and now lives in a quiet community outside New Orleans. He was among hundreds of criminals Cuba expelled to the US in 1980. His story echoes the violence that has coursed through the Americas since before Columbus to the crushing savagery of the Spanish Conquest, and from 19th- and 20th-century wars and revolutions to the military crackdowns that convulse Latin America to this day.

Xavier Albó is a Jesuit priest from Barcelona who emigrated to Bolivia, where he works among the indigenous people. He considers himself an Indian in head and heart and, for this, is well known in his adopted country. Although his aim is to learn rather than proselytize, he is an inheritor of a checkered past, where priests marched alongside conquistadors, converting the natives to Christianity, often forcibly, in the effort to win the New World. Ever since, the Catholic Church has played a central role in the political life of Latin America—sometimes for good, sometimes not.

In Silver, Sword, and Stone Marie Arana seamlessly weaves these stories with the history of the past millennium to explain three enduring themes that have defined Latin America since pre-Columbian times: the foreign greed for its mineral riches, an ingrained propensity to violence, and the abiding power of religion. What emerges is a vibrant portrait of a people whose lives are increasingly intertwined with our own.

MARIE ARANA is a Peruvian-American author of nonfiction and fiction, senior advisor to the U.S. Librarian of Congress, director of the National Book Festival, the John W. Kluge Center’s Chair of the Cultures of the Countries of the South, and a Writer at Large for the Washington Post. For many years, she was editor-in-chief of the Washington Post’s literary section, Book World. She has also written for the New York Times, the National Geographic, the International Herald Tribune, Spain’s El País, and Peru’s El Comercio, among many other publications. Her biography of Simón Bolívar won the 2014 Los Angeles Times Book Prize; her memoir, American Chica, was a finalist for the National Book Award. She has also written two novels, Cellophane and Lima Nights.