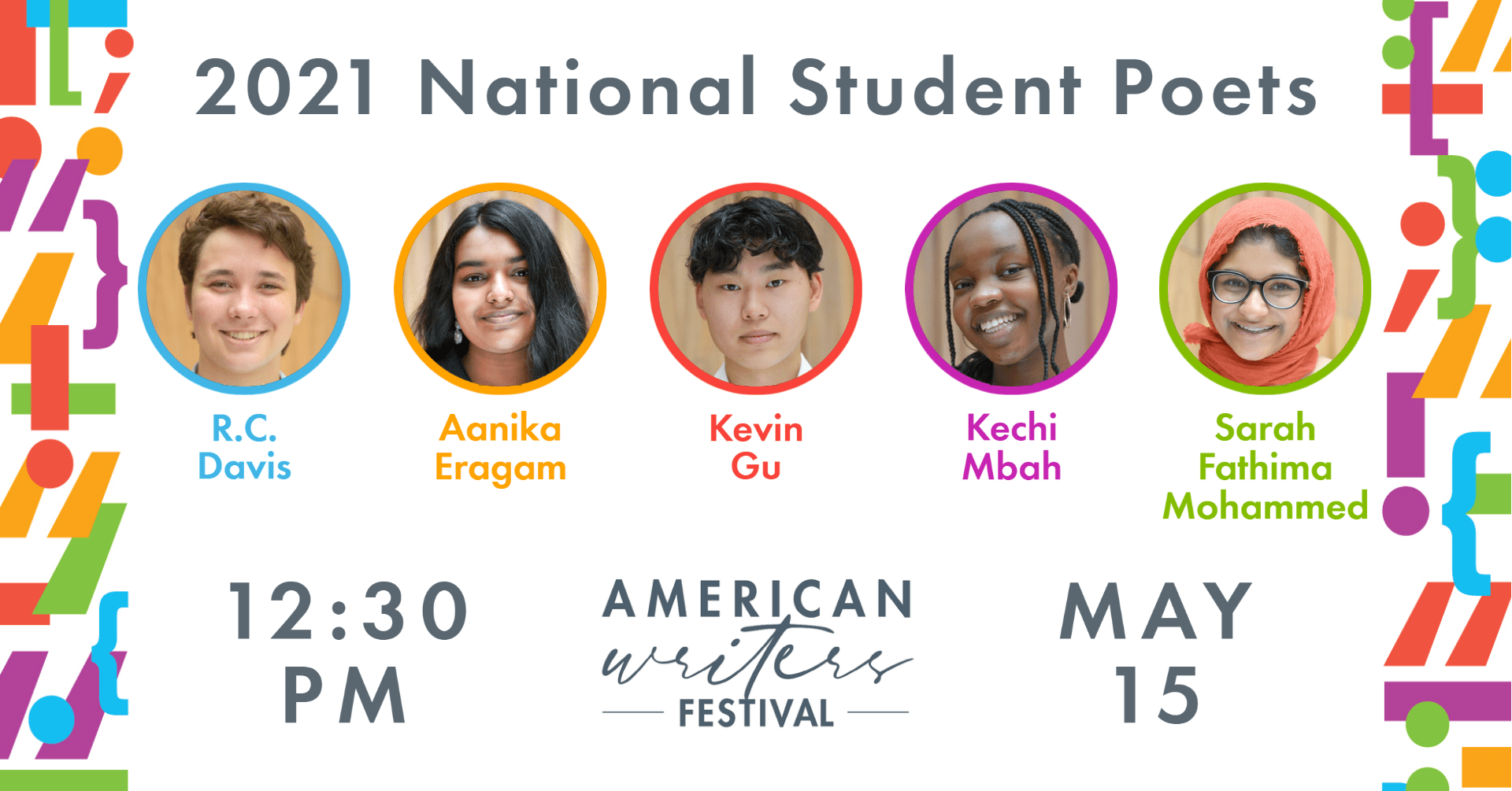 Presented by the National Student Poets Program. The National Student Poets Program is the nation’s highest honor for young poets (grades 10–11) creating original work. Annually, five students are selected for one year of service, each representing a different geographic region of the country. The Program believes in the power of youth voices to create and sustain meaningful change, and supports them in being heard.

There will be NO signing for this event.

R.C. Davis is a high school senior and poet from Oak Park, Illinois. He began writing poetry seriously his freshman year when he joined his high school’s spoken word club and is a two-time competitor in the Chicago spoken word competition Louder Than a Bomb. His poems frequently wrestle with questions of gender and family and the strangeness of being a human with a brain and body. He is a winner of a 2019 Gwendolyn Brooks Youth Poetry Award and has been published in Driftwood, Blue Marble Review, and 3Elements Review. RC is an apprentice editor for BreakBread Literary Magazine, which focuses on the publication of writers under 25. He owes his poetic successes to the encouragement he has received from his slam team and his teachers.

Aanika Eragam is a senior at Milton High School in Milton, Georgia who serves as the 2021 National Student Poet for the Southeast. Through her mother’s bedtime tales of South Indian mythology, Aanika was first exposed to the power of storytelling in connecting her to her cultural heritage, unlocking foreign perspectives, and exploring history. Since then, she’s written poetry and creative nonfiction about culture, family, girlhood, and body image. Aanika serves as the 2021 Atlanta Youth Poet Laureate and the Editor-in-Chief of her high school literary magazine The Globe.

Kevin Gu is a Chinese American from Boston and the 2021 National Student Poet of the Northeast. His work has been included in Rattle, The National Poetry Quarterly, Ember Journal, and The Eunoia Review among others. On his off days, he enjoys hunting for underrated boba shops and eating cold watermelon.

Kechi Mbah is a senior at Carnegie Vanguard High School and a Houston native. She first found a love for poetry when she stumbled upon a YouTube video of a Brave New Voices slam competition in the fall of 2019 and has been performing and writing poetry ever since. Her poetry explores many avenues from making the known strange to chronicling her experiences as a Nigerian-American and the histories of her people. She currently serves as the 2021 National Student Poet of the Southwest and her work can be found in Blue Marble Review, The Incandescent Review, elementia, and elsewhere.

Sarah Fathima Mohammed, daughter of Indian Muslim immigrants, is the 2021-22 National Student Poet representing the West Region, the nation’s highest honor for youth poets. She writes poetry sourced in grief, faith, and longing because, for her people, these emotions are inherited. When she travels back to her hometown in Kumbakonam, India, Sarah sits in circles with girls at the mosque, reading Safia Elhillo and Fatimah Asghar’s anthology of Muslim voices, Halal If You Hear Me. When she is not writing, Sarah loves long morning walks with her family and listening to music by Yuna.