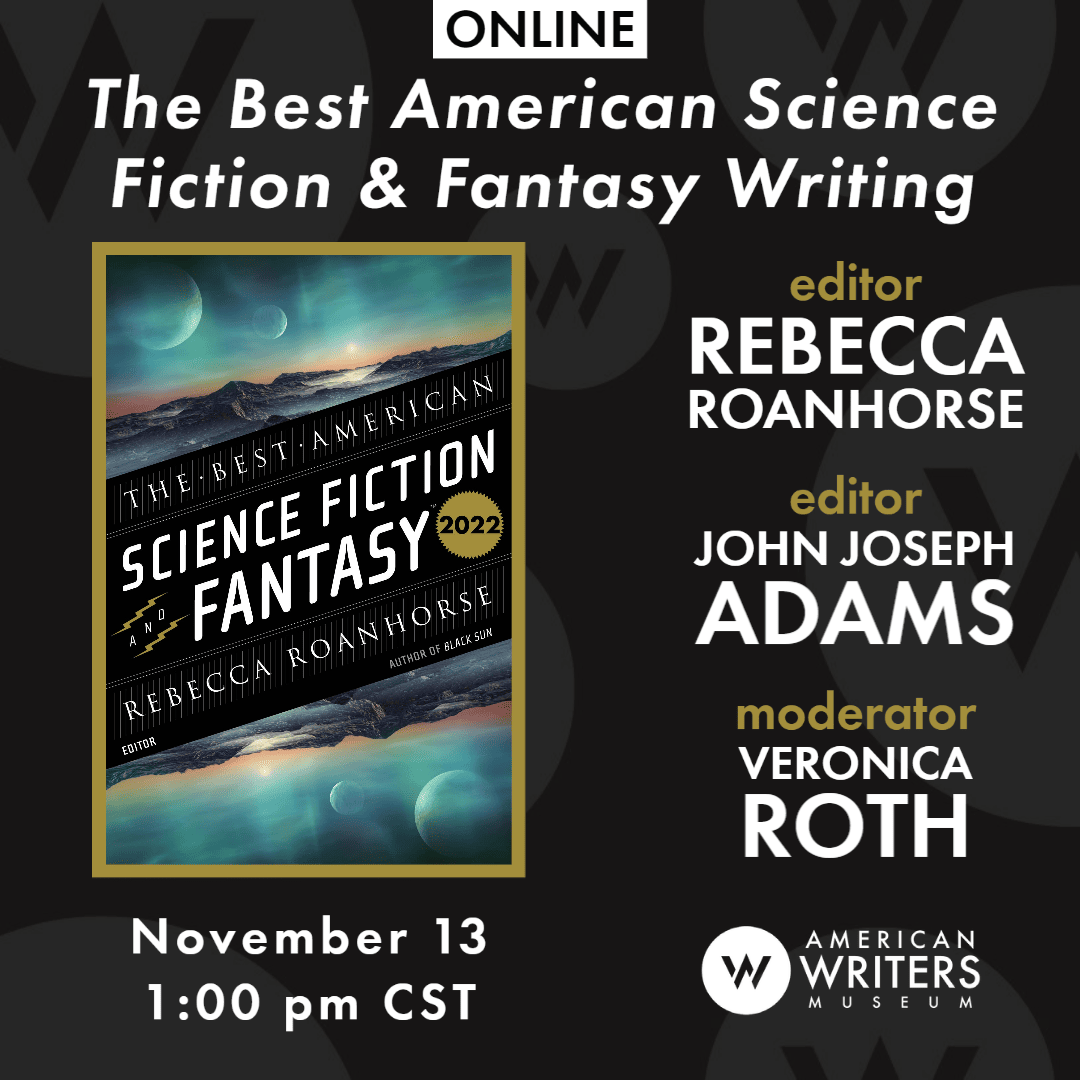 Let your imagination run wild at this exciting panel discussion! Series editors Rebecca Roanhorse and John Joseph Adams present and discuss this year’s edition of The Best American Science Fiction and Fantasy Writing, moderated by bestselling writer Veronica Roth, author of the Divergent series. Select titles will be available for purchase and the writers will sign books following the program.

This is the live online broadcast of an in-person program. When you register for this event you will get a link to view the broadcast via Zoom. If you would like to attend the event in-person at the American Writers Museum, register here. Tickets for this program can be used at a later date for general admission to the Museum. 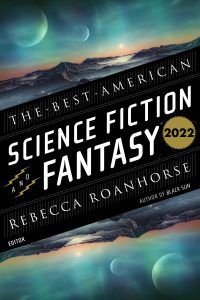 More about The Best American Science Fiction and Fantasy Writing 2022:

Today’s readers of science fiction and fantasy have an appetite for stories that address a wide variety of voices, perspectives, and styles. There is an openness to experiment and pushing boundaries, combined with the classic desire to read about spaceships and dragons, future technology and ancient magic, and the places where they intersect. Contemporary science fiction and fantasy looks to accomplish the same goal as ever—to illuminate what it means to be human.

The Best American series is the premier annual showcase for the country’s finest short fiction and nonfiction. Each volume’s series editor selects notable works from hundreds of magazines, journals, and websites. A special guest editor—a leading writer in the field—then chooses the best twenty or so pieces to publish. This unique system has made the Best American series the most respected—and most popular—of its kind. Science fiction and fantasy enjoys a long literary tradition, stretching from Mary Shelley, H.G. Wells, and Jules Verne to Ray Bradbury, Ursula K. Le Guin, and William Gibson.

REBECCA ROANHORSE is a New York Times bestselling and Nebula, Hugo, and Locus Award-winning speculative fiction writer and the recipient of the 2018 Astounding (Campbell) Award for Best New Writer. Rebecca has published multiple award-winning short stories and five novels, including two in The Sixth World Series, Star Wars: Resistance Reborn, Race to the Sun for the Rick Riordan imprint, and her latest novel, the epic fantasy Black Sun. She has also written for Marvel Comics and for television, and had projects optioned by Amazon Studios, Netflix, and Paramount TV. Find her Fiction & Non-Fiction HERE.

JOHN JOSEPH ADAMS is the series editor of Best American Science Fiction and Fantasy and is the editor of more than thirty anthologies, such as Wastelands and The Living Dead. He is also editor (and publisher) of the Hugo Award-winning magazine Lightspeed, and for five years he was the editor of the John Joseph Adams Books novel imprint for Houghton Mifflin Harcourt. Lately, he’s been working as an editor on TTRPG projects for Kobold Press and Monte Cook Games and as a contributing game designer on books such as Tome of Heroes. Learn more at johnjosephadams.com.

VERONICA ROTH is the New York Times bestselling author of the novels Poster Girl and Chosen Ones, the short story collection The End and Other Beginnings, the Divergent series, and the Carve the Mark duology. She was also the guest editor of The Best American Science Fiction and Fantasy 2021. She lives in Chicago, Illinois. Learn more at veronicarothbooks.com.