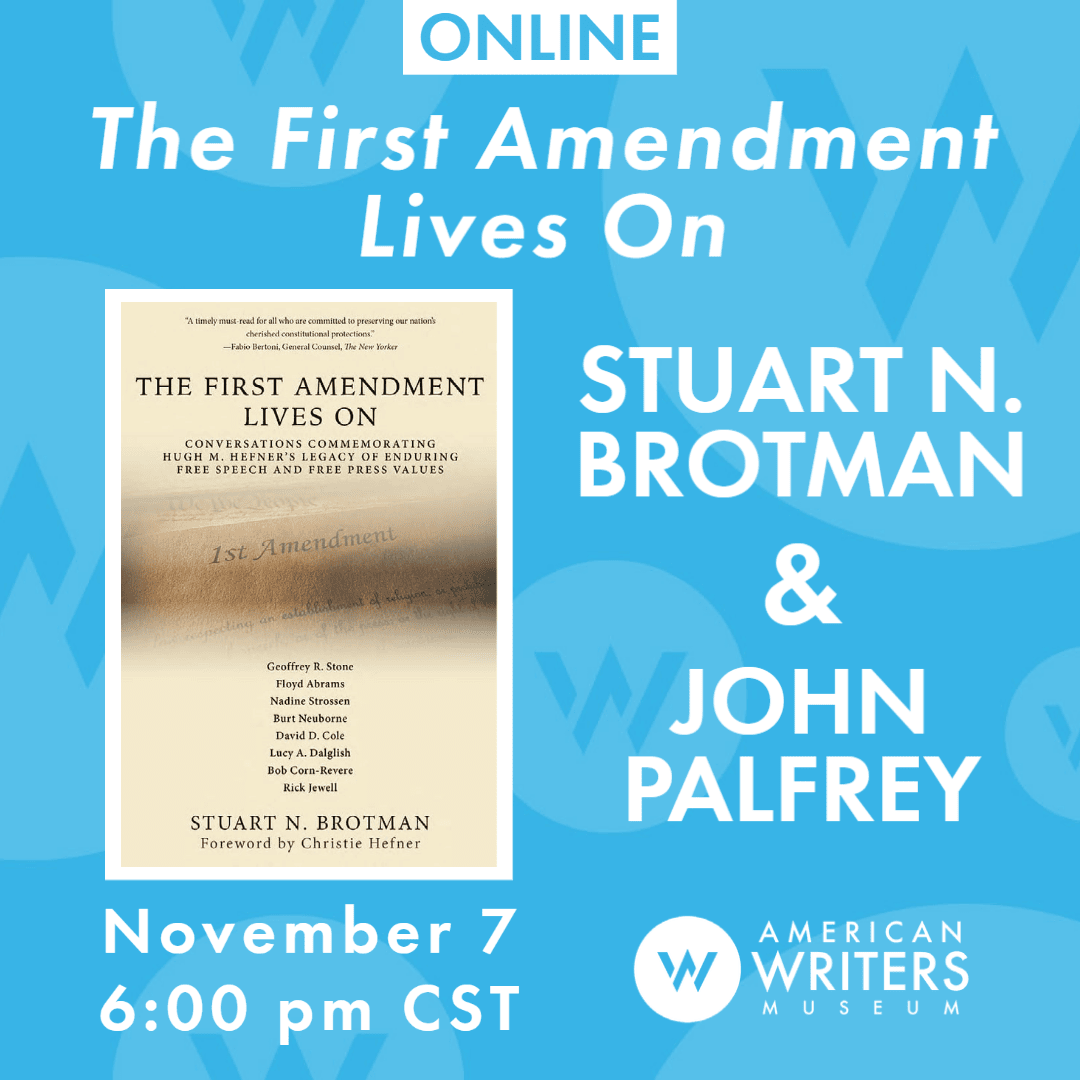 The First Amendment Lives On (Online)

Join us for a special night celebrating the First Amendment and the legacy of Hugh M. Hefner, a staunch supporter of freedom of speech and freedom of the press. Stuart N. Brotman discusses his new book The First Amendment Lives On, a collection of conversations with First Amendment scholars and advocates with John Palfrey, President of the John D. and Catherine T. MacArthur Foundation.

This event is the live online broadcast of an in-person event. When you register for this event you will get a link to view the broadcast via Zoom. If you would like to attend the event in-person at the American Writers Museum, register here. Tickets for this program can be used at a later date for general admission to the Museum. 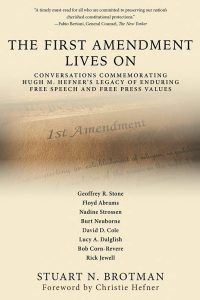 More about The First Amendment Lives On:

Hugh M. Hefner’s legacy of enduring free speech and free press values is embodied in the Hugh M. Hefner First Amendment Awards, established in 1979, which honor leading First Amendment scholars and advocates. Hefner also had a lifelong interest in film censorship issues and supported teaching about them at the University of Southern California for 20 years. His deep commitment to these values was confirmed when the author was granted unrestricted access to over 3,000 personal scrapbooks, which Hefner had kept in order to track free speech and press issues during his lifetime.

The format of the book is an homage to the in-depth conversational interviews Hefner pioneered as the editor and publisher of Playboy magazine. Stuart Brotman conducted in-person conversations with eight persons who in their lifetimes have come to represent a “greatest generation” of free speech and free press scholars and advocates. Notably, these conversations include Geoffrey R. Stone, Floyd Abrams, Nadine Strossen, Burt Neuborne, David D. Cole, Lucy A. Dalglish, Bob Corn-Revere, and Rick Jewell.

JOHN PALFREY is President of the John D. and Catherine T. MacArthur Foundation, one of the nation’s largest philanthropies with assets of approximately $7 billion, and offices in Chicago, New Delhi, and Abuja, Nigeria. Palfrey is a well-respected educator, author, legal scholar, and innovator with expertise in how new media is changing learning, education, and other institutions. Throughout his career, he has demonstrated a commitment to rigorous thinking, disruption, and creative solutions often made possible by technology, accessibility of information, and diversity and inclusion. Palfrey has extensive experience in social change spanning the education, nonprofit, and philanthropic sectors. He is the author or coauthor of several books, including Safe Spaces, Brave Spaces: Diversity and Free Expression in Education. A revised and expanded version of his book Born Digital: How Children Grow Up in a Digital Age, which he co-authored with Urs Gasser, was issued in 2016. Palfrey serves on the board of the John S. and James L. Knight Foundation and is a member of the American Academy of Arts & Sciences. Palfrey holds a JD from Harvard Law School, an MPhil from the University of Cambridge, and an AB from Harvard College.