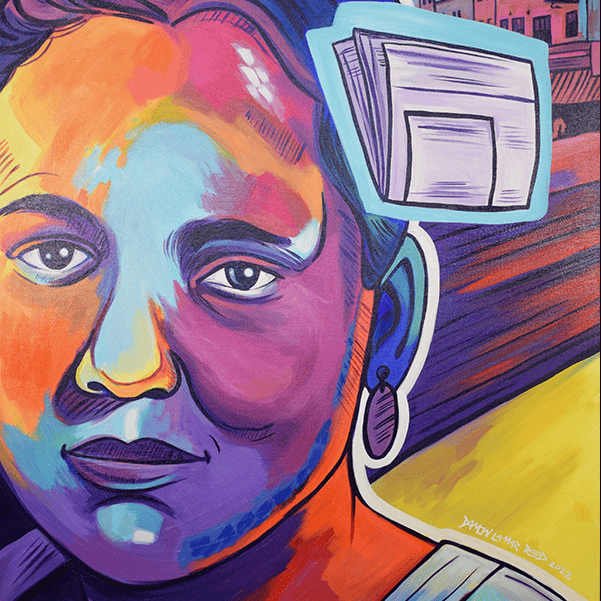 Known as the First Lady of the Black Press because of her fearless pursuit of social justice, Ethel Payne was a groundbreaking journalist. She began writing about the Korean War in her journal around 1950, and was hired by the Chicago Defender after a reporter saw her journals. Using simple and straightforward language, Payne reported on topics ignored by the white press. These issues included the poor treatment of African American troops, General MacArthur’s refusal to desegregate the American military, the abandoned babies of Black soldiers and Japanese mothers, and the Black adoption crisis. In 1970, Payne was hired by CBS, becoming the first African American woman to be a TV and radio anchor for a national news network. Though her legacy as a journalist has been overlooked up until recently, her writing is coming back into the light.

This acrylic portrait was painted by Damon Reed.

There’s truth to the saying that a picture is worth a thousand words.  Artist Damon Lamar Reed brings that truth to reality.  He learned early on, that regardless of the medium, his purpose was to inspire. Damon often says, “I paint raps and I rap paintings.” His goal is to create messages that reach the depth of the human condition.