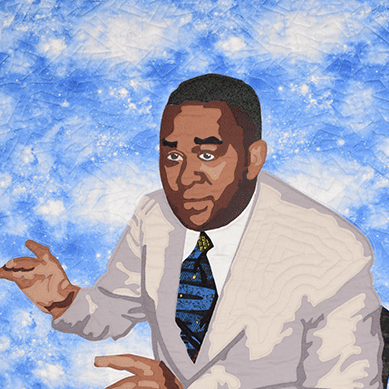 Richard Wright was the grandchild of former enslaved people, and was well acquainted with poverty. He moved from relative to relative as a child and as an adult moved from one unskilled job to another until he ended up in Chicago. In 1937, he went to New York where he became the editor of the communist paper Daily Worker. Wright used his writing to protest white treatment of Black people, which started a tradition of Black protest writing following World War II. While it was not his first novel, Wright’s first bestseller was Native Son (1940). He moved to Paris permanently after World War II.

This quilt was designed by Dorothy Burge and machine quilted by Judy Wolff.

Dorothy Burge is a quiltavist, a person who does quilting and activism together. She is a fabric and multimedia artist and community activist who is inspired by history and current issues of social justice. Burge’s ancestors created beautiful quilts from recycled clothing. Her realization that the history and culture of her people were being passed in the form of quilt art inspired her to use this medium as a tool to teach history, raise cultural awareness, and inspire action.