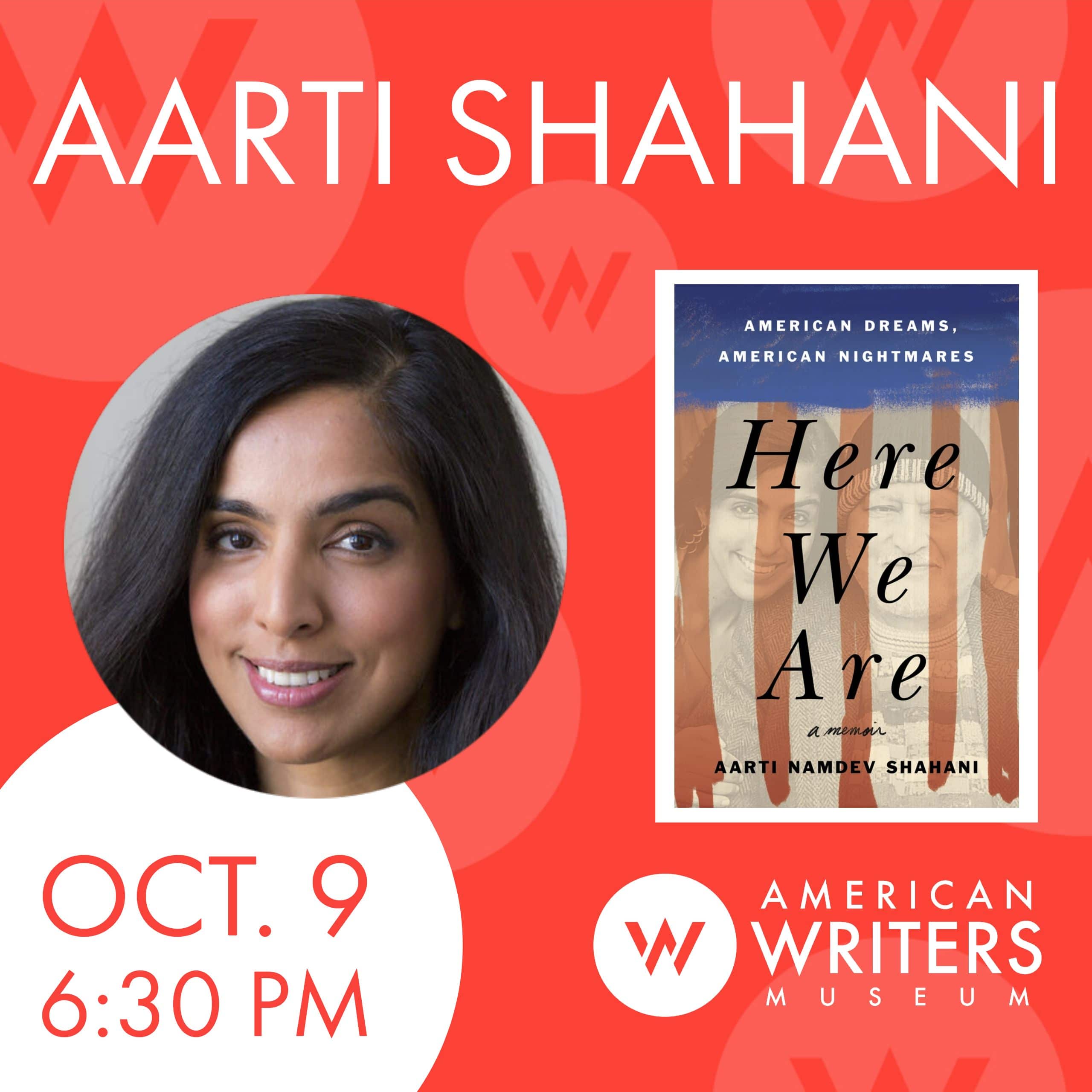 Aarti Shahani: Here We Are

NPR Correspondent Aarti Shahani presents her new book Here We Are: American Dreams, American Nightmares, a heartfelt memoir about the immigrant experience and coming of age in one of America’s most diverse neighborhoods. Shahani is joined by fellow NPR correspondent Sonari Rhodes Glinton. This program is part of the Jeanne M. and John W. Rowe program series, presented in conjunction with our special exhibit My America: Immigrant and Refugee Writers Today. Books will be sold and signed at the event.

About Here We Are: American Dreams, American Nightmares

Who really belongs in America? That question has chased every newcomer and many native born since the founding of the republic. In this heart-wrenching, vulnerable and witty memoir, journalist Aarti Shahani digs deep inside herself and her family for an answer—one that she finds in an unlikely place.

The Shahanis came to Queens—from India, by way of Casablanca—in the 1980s. They were undocumented for a few years and then, with the arrival of their green cards, they thought they’d made it. This memoir is the story of how they did, and didn’t.

Here We Are: American Dreams, American Nightmares follows the lives of Aarti, the precocious scholarship kid at one of Manhattan’s most elite prep schools, and her dad, the shopkeeper who mistakenly sells watches and calculators to the notorious Cali drug cartel. Together, the two represent the extremes that coexist in our country, even within a single family, and a truth about immigrants that gets lost in the headlines. It isn’t a matter of good or evil; it’s complicated.

Ultimately, Here We Are is a coming-of-age story, a love letter from an outspoken modern daughter to her soft-spoken Old World father. She never expected they’d become best friends.

Aarti Namdev Shahani is a correspondent for NPR based in Silicon Valley, covering the largest companies on earth. Her reporting has received awards from the Society of Professional Journalists, a regional Edward R. Murrow Award, and an Investigative Reporters & Editors Award. Before journalism, Shahani was a community organizer in New York City, helping prisoners and families facing deportation. Her activism was honored by the Union Square Awards and Legal Aid Society. She received a Master’s in Public Policy from the Harvard Kennedy School of Government, with generous support from the university and the Paul and Daisy Soros Fellowship for New Americans. She completed her bachelor’s degree in anthropology at the University of Chicago. She was among the youngest recipients of the Charles H. Revson Fellowship at Columbia University and is an alumna of A Better Chance, Inc. Shahani grew up in Flushing, Queens—in one of the most diverse zip codes in the country—and believes every American should visit her hometown to understand what makes America great.

Sonari Rhodes Glinton is a reporter and producer, the founder of DeLite! Media, and served as an award-winning correspondent on NPR’s Business Desk and the ground-breaking NPR podcast “Planet Money.” Sonari began in journalism as producer at WBEZ followed by NPR’s “All Things Considered.” He has had more than a decade-long relationship with Youth Radio; mentoring, editing, teaching and reporting NPR stories with teens. Sonari’s innovative approach to storytelling has been heard by NPR’s 40 million listeners on 660+ stations. Sonari has been recognized by The Society of Professional Journalists for investigative reporting for his role in uncovering abuse and corruption in Cook County juvenile system, which led to widespread reform in the system. Most recently he received the Edward R. Murrow Award for investigative reporting into President Trump’s business practices. He serves as an adviser to The Elie Wiesel Center for Jewish Studies at Boston University.