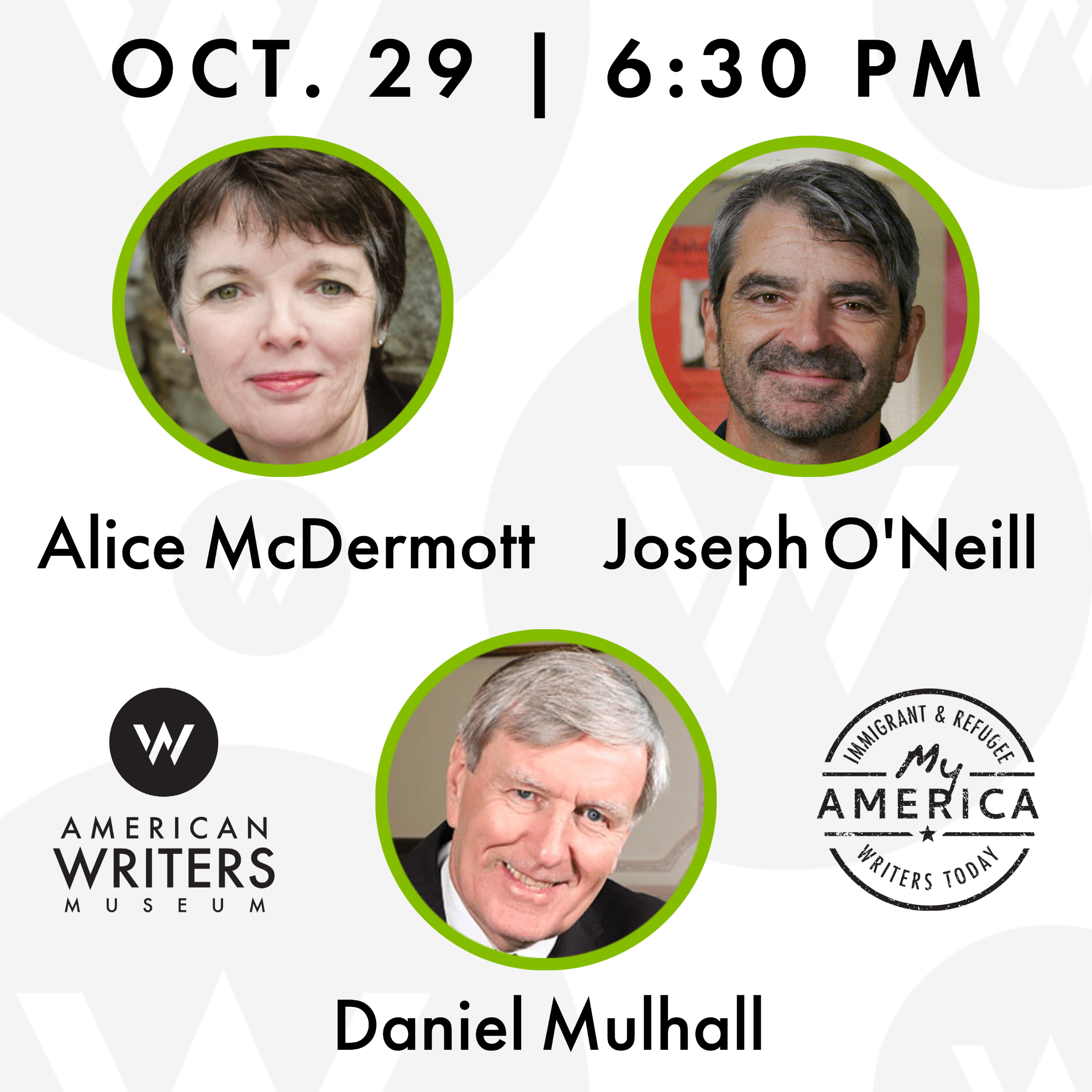 In this installment of the Jeanne M. and John W. Rowe Program Series, Irish Ambassador to the United States Daniel Mulhall talks with acclaimed Irish-American writers Alice McDermott and Joseph O’Neill about their work and heritage. This program takes place October 29 at 6:30 pm Central, register for the free program here.

This program is held in conjunction with our special exhibit My America: Immigrant and Refugee Writers Today, which can be explored in person at the American Writers Museum in Chicago and online.

Alice McDermott’s eighth novel, The Ninth Hour, was published by Farrar, Straus & Giroux in September 2017. Her seventh novel, Someone, 2013, was a New York Times bestseller, a finalist for the Dublin IMPAC Award, the National Book Critics Circle Award, the Patterson Prize for Fiction, and The Dayton Literary Peace Prize. Someone was also long-listed for the National Book Award. Three of her previous novels, After This, At Weddings and Wakes and That Night, were finalists for the Pulitzer Prize. Charming Billy won the National Book Award for fiction in 1998 and was a finalist for the Dublin IMPAC Award. That Night was also a finalist for the National Book Award, the PEN/Faulkner Award and the Los Angeles Times Book Prize. Her stories, essays and reviews have appeared in The New York Times, The Washington Post, The New Yorker, Harpers, Commonweal and elsewhere. She has received the Whiting Writers Award, the Carington Award for Literary Excellence, and the F. Scott Fitzgerald Award for American Literature. In 2013, she was inducted into the New York State Writers Hall of Fame. She is the Richard A. Macksey Professor of the Humanities at Johns Hopkins University.

Joseph O’Neill is the author of the novels The Dog, Netherland (which won the PEN/Faulkner Award for Fiction and the Kerry Group Irish Fiction Award), The Breezes, and This Is the Life. He has also written a family history, Blood-Dark Track. He lives in New York City and teaches at Bard College.

Daniel Mulhall is an Irish diplomat who is the current Ambassador of Ireland to the United States since August 2017. He has also been Ireland’s Ambassador to the United Kingdom, Germany and Malaysia. Ambassador Mulhall maintains a keen interest in Irish history and literature. He is the author of A New Day Dawning: A Portrait of Ireland in 1900 and co-editor of The Shaping of Modern Ireland: A Centenary Assessment and has made numerous contributions to books, newspapers and journals published in Ireland, Australia, New Zealand, Germany and Britain.