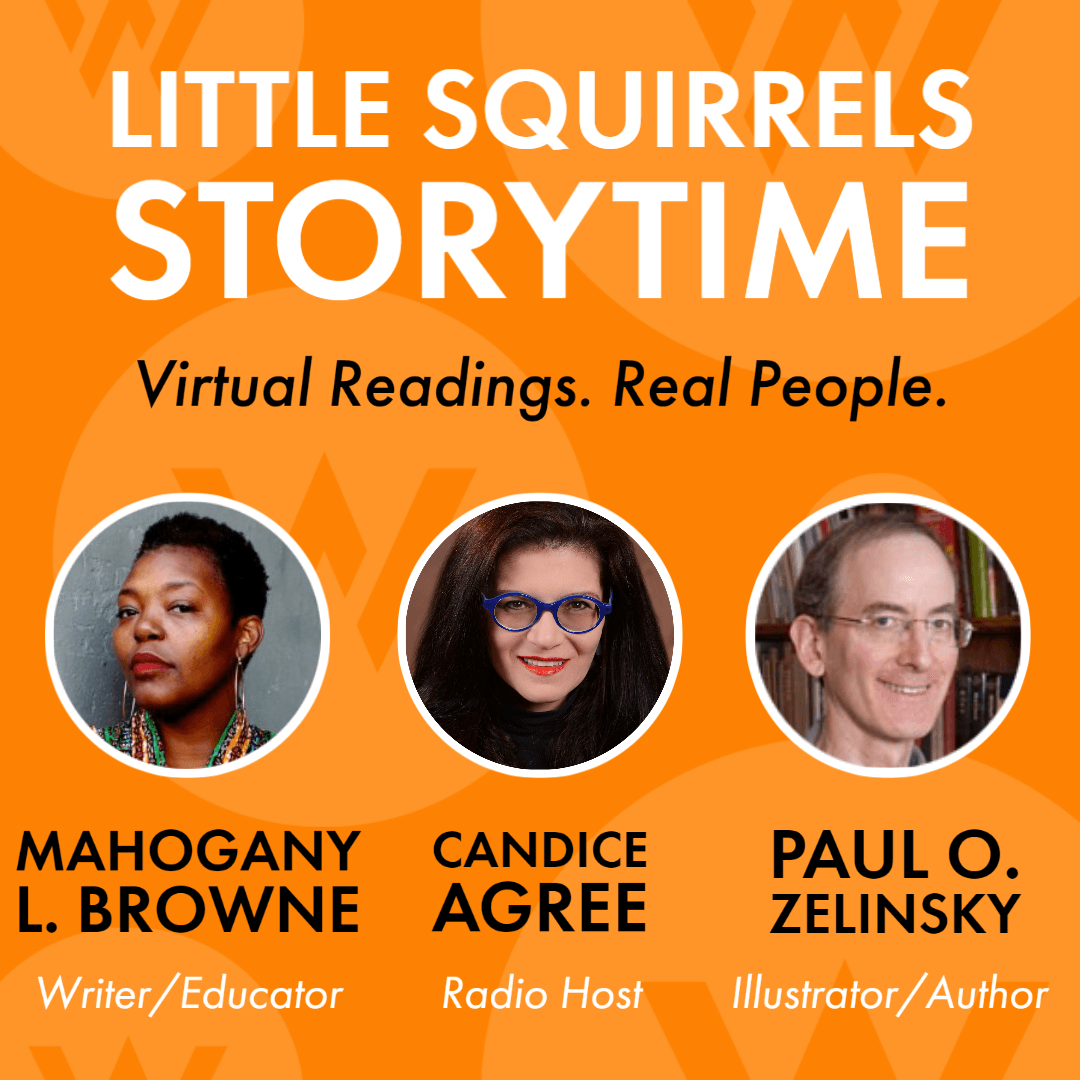 Our weekly Little Squirrel Storytimes have moved online! Tune in to the American Writers Museum on Facebook Saturday, April 25 at 10:30 am to watch and listen to these three storytellers read three different stories!

Mahogany L. Browne reads her poem In the Next.
Candice Agree reads The Story of Ferdinand by Munro Leaf.
Paul O. Zelinksy reads The Lion and the Stoad written and illustrated by himself.

MAHOGANY L. BROWNE was born in Oakland, CA but has been based in Brooklyn, NY for more than 15 years. A strong, black woman, Browne is unapologetic in her work as a spoken word poet, author, and activist. She uses her personal experience with addiction, racism, sexism, and oppression to inspire her own brand of shameless, authentic work. Browne’s spoken word performances create a platform through poetry for women and girls to feel empowered and heard.

CANDICE AGREE joined WFMT in 2013. She began her radio career as an intern for Howard Stern at WNBC and continued as a music host in Washington, DC (WETA) and New York City (WQXR, WNCN, WNYC, Sirius). An off-camera announcer with CBS News since 1998, she can be heard on “CBS Evening News” and “CBS Sunday Morning,” as well as “Sunday Morning on the Radio,” and the “Sunday Morning” and “Mobituaries” podcasts. After studying theory and composition at Eastman School of Music, Candice received a degree in Russian from Barnard College. A Foundation for Iberian Music Contributing Scholar, her weekly program The Spanish Hour has been distributed nationally since 2010 via PRX. You can hear her weekly early music program, Baroque & Before, Wednesdays at 10:00 pm on WFMT.

PAUL O. ZELINSKY’S first book appeared in 1978, since which time he has become recognized as one of the most inventive and critically successful artists in the field. Among many other awards and prizes, he received the 1998 Caldecott Medal for his illustrated retelling of Rapunzel, as well as Caldecott Honors for three of his books: Hansel and Gretel (1985), Rumpelstiltskin (1987), and Swamp Angel (1995). In 2018, Paul was given the Carle Honor Award for Illustration. He now lives with his wife in Brooklyn, New York. They have two grown daughters. Zelinsky is also the creative mind behind the colorful tree mural in our Children’s Literature Gallery.