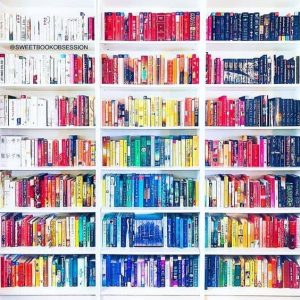 To end our adventure through the color spectrum, we’ll be taking a stop at the place where the colors meet: the RAINBOW! One of the most beautiful sites in all of nature, the rainbow is actually an optical illusion caused by the reflection, refraction, and dispersion of light in water droplets in the sky. While we normally perceive rainbows as massive arcs in the sky, they are most often actually full circles which can often be seen from airplanes. Rainbows begin with red on the outside rim and violet on the inside, except in the case of double rainbows, where the color order is reversed. In 1672, Isaac Newton first divided the rainbow into five main color groups: red, yellow, green, blue, and violet; later adding orange and indigo to create the color spectrum we know today. Newton thought to define the rainbow as seven colors to be in line with the thinking of ancient Greek philosophers who believed there was a connection between the colors of the rainbow, the number of notes in a musical scale, the days of the week, and the number of known objects in the solar system.

The rainbow has been a significant symbol in mythology, religion, and art for centuries. The earliest written mention of the rainbow is in the Bible in chapter 9 of the Book of Genesis, as part of the story of Noah’s Ark. In Norse mythology, a rainbow bridge called the Bifröst connected Midgard, the world of man, to Asgard, the world of the gods. Most famously, the rainbow has a strong connection to Irish folklore. The legend goes that if you can capture a leprechaun, you can force him to tell you where he’s hidden his “pot o’ gold,” often at the end of the rainbow. 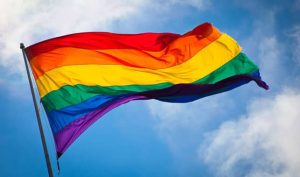 Rainbow flags have been used for centuries by people all over the world. It was a symbol of the Cooperative movement in the German Peasants’ War during the 16th century, by the Jewish Autonomous Oblast, and by LGBTQ+ groups since the early 1970s. Rainbows are often used in paintings, especially religious works and landscapes. During periods of the COVID-19 pandemic, rainbows were unofficially adopted as a symbol of hope. Households across the world displayed images of rainbows in their windows, often with positive messages.

—Aberjhani, Journey Through the Power of the Rainbow: Quotations from a Life Made Out of Poetry

“In our world, I rank music somewhere between hair ribbons and rainbows in terms of usefulness.”

“Someday we’ll find it
The Rainbow Connection
The lovers, the dreams, and me.”

―Kermit the Frog, “The Rainbow Connection,” Lyrics by Paul Williams and Kenneth Ascher

One thought on “All the Covers of the Rainbow: Rainbow”