Deborah Blum is a Pulitzer Prize-winning journalist who currently serves as director of the Knight Science Journalism Program at MIT, and publisher of the award-winning Undark magazine. Her most recent book, The Poison Squad, tells the dramatic true story of how food was made safe in the United States in the early 1900s, led by the single-minded crusade of Dr. Harvey Washington Wiley who took on powerful corporations in the name of consumer protection. Blum effectively brings this “David vs. Goliath” tale to life, driving home the “moral imperative of confronting corporate greed and government corruption with a bracing clarity, which speaks resoundingly to the enormous social and political challenges we face today.”

We spoke with Blum via email ahead of her August 15 event here about The Poison Squad and how this story still impacts us today. She shared insights into her writing process, the state of journalism today, and why the struggle for consumer protection is as imperative today as it ever was. Read on to hear more from Blum, and RSVP to her event here.

AMERICAN WRITERS MUSEUM: The Poison Squad tells the true story of how food was made safe in the United States. This is an important story, yet it is a history that many people might not be aware of…why do you think this is?

DEBORAH BLUM: I think most of us — and I include myself in this — were taught a kind of mythology about the wonderful healthy food of earlier generations. The idea that our great-grandparents, pink-cheeked and glowing with health, thrived on farm-fresh products and pure ingredients. You hear this sometimes from food advocates: Don’t eat anything your grandparents wouldn’t recognize and so on. So when I first started investigating I was shocked to realize how wrong this was. Especially, in the 19th century, in a time before any federal consumer protections, before anything like an FDA or an EPA existed, manufacturers could put anything they wanted into food and drink, they didn’t have to safety test it, they didn’t have to put a label. So because industry was not always honest, our great-grandparents actually ate food that was often faked and equally often poisonous.

And that’s the other part of this forgetfulness, I think. We tend to suffer from what I think of as “regulatory memory failure” — we don’t remember what the country was like before food standards were set in the early 20th century, we don’t even remember what the country was like before environmental standards came in in the 1970s. And we should — which is why stories like this are so important.

AWM: Who are some of the central figures in the book that we should know about? How did you come across their names and stories? 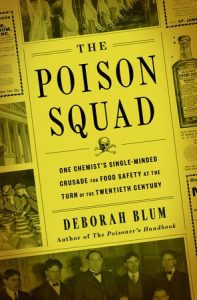 BLUM: The main character in my book is a holy-roller of a chemist named Harvey Washington Wiley (described in the subtitle as “single-minded”) and the narrative of the story is about his fight to first investigate the American food supply and then his crusade to make it safer. Amazing, difficult, fascinating man — and an illustration of one of my favorite points in writing such books: that one determined person can make a difference. He’s not as famous as he should be — although I’d like to change that.

But you’ll recognize many of the others: Teddy Roosevelt, Henry Heinz, the founder of the ketchup empire, the novelist Upton Sinclair, the settlement house pioneer Jane Addams…they all play into this fascinating story of the invention of food safety. But I didn’t learn all that until I became interested in a truly bizarre experiment by Wiley in which he deliberately poisoned some of his co-workers (I’m oversimplifying this a little but not too much) in order to figure out just how dangerous food had become. It’s that experiment that gives the book its title.

AWM: How does the saga of The Poison Squad relate to our current state of political, economic, and social affairs? Are there any parallels between then and now? What lessons can we learn from these figures who successfully battled corporate greed and government corruption to enact meaningful and necessary change?

BLUM: That’s a great question because when I first started this book, I thought I was just telling the story of an intriguing and forgotten moment in history. But, as I discovered, this is the moment in which the foundation of consumer protection was laid in this country. And both the successes and failures of the laws still shape those protections today. They are thinner than we could wish, they are imperiled by actions taken by our current federal government, but they are vital to our safety. And this story, I hope, will serve as a reminder that they are worth fighting to keep.

Local newspapers are worth fighting for and keeping. They are part of the bedrock of democracy.

AWM: As a Pulitzer Prize-winner, how would you assess the state of the news industry at this point and what can we as readers and consumers do to help?

BLUM: Well, my first answer to that is subscribe to your local newspaper! The Chicago Tribune does some great work. And local newspapers are worth fighting for and keeping. They are part of the bedrock of democracy. And they will tell you about your own community in a way that no one else does. And, yes, I subscribe to my local newspaper, the Boston Globe. (Also the New York Times, the Washington Post and the Los Angeles Times, but that’s just being a journalist). The news industry is being hit hardest at the local level right now. Digital publications are growing and then thriving. I publish an award-winning digital science magazine, Undark (undark.org) through the program I run at MIT. So while we are still figuring out the economic models for digital, I am optimistic about the future. But don’t want to lose everything valuable about the past — which is why I say, subscribe to your local newspaper!

BLUM: That’s a tough one, but probably Edith Wharton. She was so fearless in the stories she told and so brilliant in the way she wove social commentary into her novels. The Custom of the Country is one of the most cynical books written about American high society. I’d love to know the story behind her stories.

AWM: What was your favorite book to read growing up?

BLUM: Oh, Little Women! For a while, I really, really wanted to be Jo March, writing theatrical prose in the attic. I even wrote plays for my sisters to perform when I was young. I don’t remember much about them now but I’m positive they were awful. None of the plays survive, thankfully!

BLUM: I need both fiction and non-fiction in my life. I read a lot of murder mysteries (which influenced my earlier book, The Poisoner’s Handbook) but I’m currently reading Elinor Oliphant is Completely Fine by Gail Honeyman. It’s a perfect balance of funny and sad. And for non-fiction, Adam HIgginbotham’s Midnight in Chernobyl, which is in many ways a parable of our time.

BLUM: Don’t give up on yourself. I’m a big believer in Anne Lamott’s theory of the “shitty first draft.” Plan on rewriting. Then rewriting. Then rewriting. My work has usually been through a dozen revisions before I’ll even let my husband look at it. And don’t let writing become too solitary. Writer’s groups, or just informal friendly readers, are going to be hugely helpful in your life. I’ve counted myself very lucky in that.

One thought on “In Their Own Words: Deborah Blum”