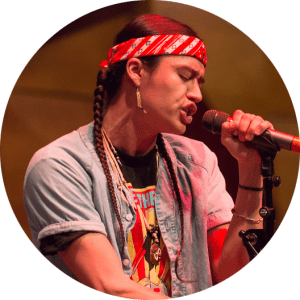 On May 9, 2019 we welcomed Lakota hip-hop artist/producer/audio engineer Frank Waln as part of our Singers & Songwriters series along with poet/songwriter/spoken word artist Tanaya Winder, who comes from an intertribal lineage of Southern Ute, Pyramid Lake Paiute, Diné, and Duckwater Shoshone Nations where she is an enrolled citizen. The two performed their work and discussed their songwriting processes, healing through storytelling, and creating spaces for indigenous voices in music and art.

Ahead of the event, Waln took time out of his busy schedule to answer some questions we had about his favorite rappers, writers, and what he misses most about living in Chicago.

American Writers Museum: What inspires you to write?

Frank Waln: Life and all the experiences that come with it. Writing songs, poems and stories is how I process the world and try to make sense of it.

AWM: How would you characterize the role of storytelling in our lives?

FW: I believe storytelling (listening or telling the story) is something that is innate to humans. Powerful storytelling can create pathways of empathy and understanding across cultural, racial and socioeconomic divides that were built up to keep us separated from one another. Most Indigenous nations have strong histories and traditions of storytelling so I see my art as a continuation of that tradition.

AWM: Does your approach to songwriting differ from other forms of writing?

FW: A lot of my songs start with either a concept (like flipping a racist Disney song in a sample to make “What Made the Red Man Red”) or a poem idea. Then I’ll come up with a musical idea on the piano, bass or drums and match it with a poem idea of a concept I had. I try not to force it and rather let the song find me. I’ve recently started using my songwriting process to learn my language Lakota which was stolen from me through colonization and genocide. Lakota is such a poetic and beautiful language, so it’s really been helping me learn and grow as a songwriter.

AWM: You’ve been rightfully honored for your activism — can you speak to the messages you convey through your work and music?

FW: I wish to convey a message of hope and strength to keep going under the crushing weight of settler colonialism and genocide. I think I also make people more aware of the land and spaces they occupy through my music because I write about being rooted and having connection to land, people and spaces in a way that colonizers don’t.

AWM: If you could meet one American writer and/or artist of the past, who would it be and why?

FW: John Trudell. His art and words are still so relevant today and he is my biggest influence. We corresponded through texts before he passed but unfortunately we never got the chance to meet or work together before he passed on. His first album Tribal Voice shakes me to my core and moves me to tears every time I listen to it.

AWM: What are you reading right now?

FW: I am currently reading Lakota Star Knowledge: Studies In Lakota Stellar Theology by Ronald Goodman and I just finished My People the Sioux by Luther Standing Bear.

AWM: What are you listening to?

AWM: You went to Columbia College Chicago and now travel the world — so what do you miss most about Chicago now that you’re not here full time?

That makes sense, Chicago’s food scene is top notch. Waln stays connected to Chicago though, as he is currently working on a couple projects with Chicago institutions, but couldn’t elaborate yet because they haven’t been officially announced. As far as music goes, Waln said he’s constantly working on new music and hopes to release a few albums in the coming year, including a Native flute + poetry EP.