Ahead of our February 6, 2020 screening and discussion of the feature-length documentary Paul Laurence Dunbar: Beyond the Mask, we asked filmmaker Frederick Lewis to share some insight into Dunbar’s life, work, and enduring legacy on American letters. Learn more about Dunbar below, then be sure to RSVP to our February 6th event. Lewis will present the film then lead a post-screening discussion. More information and tickets available here.

Poet Paul Laurence Dunbar, the son of former slaves, and the only African American in his high school class in Dayton, Ohio, enjoyed an extraordinary educational experience. At a time when most students, black or white, failed to graduate, Dunbar did so having been the editor of the school newspaper, president of the literary club, and a published poet whose verse appeared in the Dayton Herald. 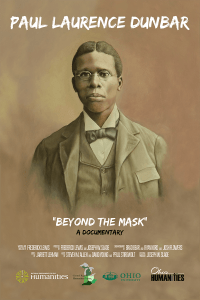 He was also the eighteen-year-old editor of The Tattler, a short lived newspaper intended for the black community that was printed by his classmate and friend Orville Wright, who had dropped out and built a printing press with his brother, Wilbur.

But Dunbar’s popularity and literary prowess did not translate into meaningful work upon graduation. White-owned newspapers would not offer a black boy regular employment. Plus, his always frail health quickly ended a brief turn as one of more than 30 African American men on the custodial staff at the National Cash Register Company.

He finally found work as an elevator boy in downtown Dayton, the job that is often assumed to be the inspiration for “Sympathy,” his poem that contains the line that is, ironically, associated more often with another African American poet. The title of Maya Angelou’s first autobiography, I Know Why the Caged Birds Sings, was meant as a tribute to the man who was once hailed as the Poet Laureate of the Negro Race.

—The final stanza of “Sympathy” by Paul Laurence Dunbar

Dunbar worked at the Library of Congress for fifteen months, in 1897-98, and it was his time spent among the musty, iron-grated book stacks retrieving and returning science and medical books that actually led to his best known metaphor. He was also the first poet to give a reading at the Library, at the newly opened Reading Room for the Blind. The Washington Post reported that several subsequent readings were so popular that blind patrons were “outnumbered by others who come to hear.”

Called, “The most promising young colored man in America,” by Frederick Douglass, Dunbar’s poor health forced his resignation from the Library. From that point on he supported himself exclusively through his writing and recitals. Far more than a poet, Dunbar wrote novels and several short stories, as well as widely published essays for newspapers and magazines critical of lynching and Jim Crow laws. With tuberculosis ravaging his lungs, Dunbar returned to Dayton in 1903, the same year that his boyhood friends, the Wright Brothers, also arrived home, triumphant, having achieved the first powered airplane flight. Three years later Dunbar’s prolific life was over at the age of just 33.

Writer, director and co-producer FREDERICK LEWIS is a professor in the School of Media Arts & Studies at Ohio University. Professor Lewis is a recipient of the Presidential Teacher Award, Ohio University’s highest honor for transformative teaching, curriculum innovation and mentoring. He has served as a Fulbright Specialist in Hungary and has taught or lectured in England, Germany, France, Malaysia and Vietnam.

Interested in learning more about the impactful, yet short, life of Paul Laurence Dunbar? Join us February 6 at 6:30 for a screening and discussion of Paul Laurence Dunbar: Beyond the Mask with filmmaker Frederick Lewis. Watch the trailer for the film below, in which Maya Angelou recites from memory Dunbar’s poem “Sympathy.”