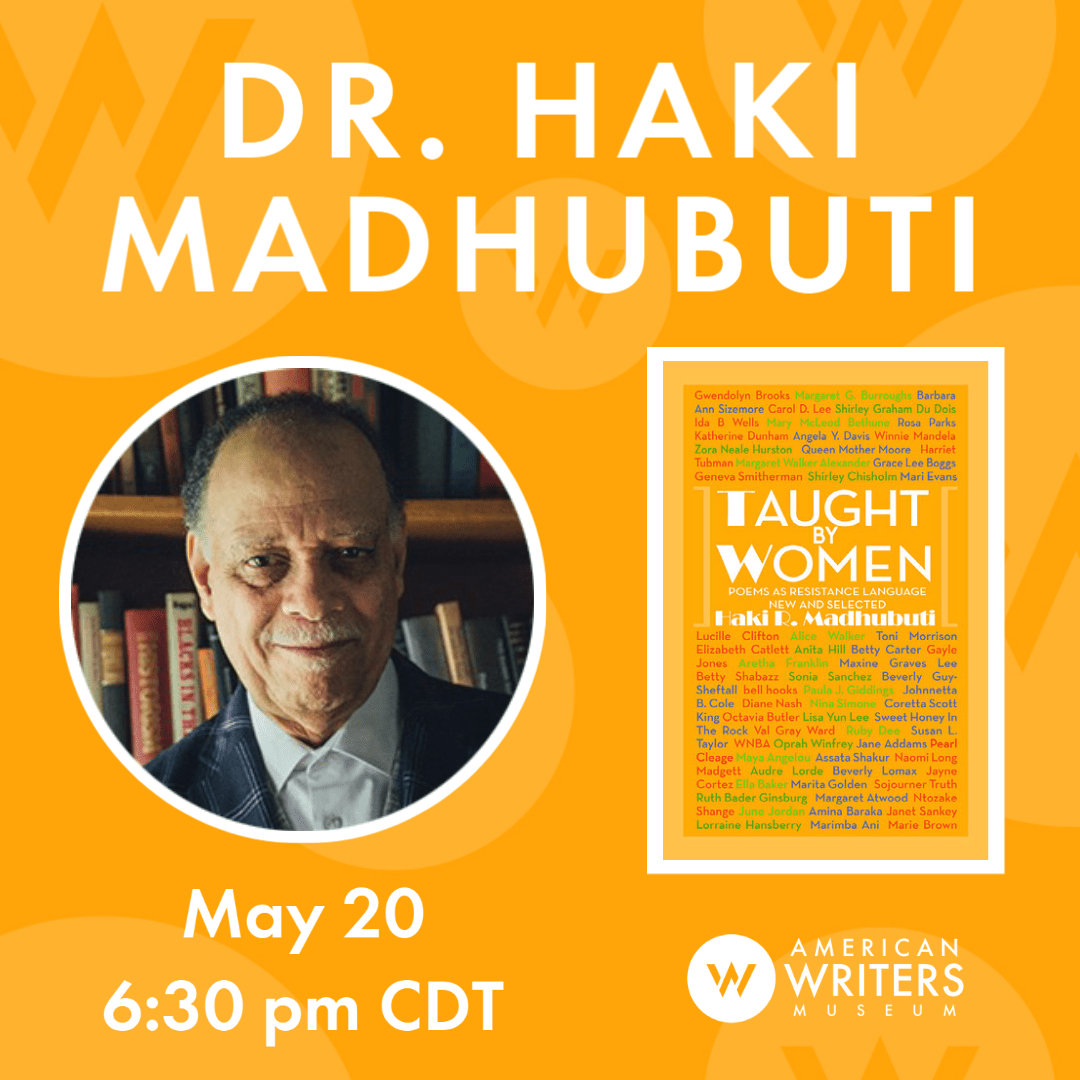 Join us for this special evening with poet, author, editor and publisher of Third World Press, DR. HAKI R. MADHUBUTI, who’ll read from and discuss his next book, Taught By Women: Poems as Resistance Language, New and Selected. This program will be hosted live via Zoom, you can register here. Purchase your copy of the book by our bookselling partner Seminary Co-op Bookstores here.

About Taught By Women:

Taught By Women marks a return to Madhubuti’s roots, as it is his first single authored book of poetry in more than fifteen years. In it, he pays homage to the many women that have influenced him and contributed to his unique world view. Readers are urged not to forget the many women who have nurtured, encouraged, challenged and strengthened us despite our sometimes dismal circumstances. He asks that we remember these women, these long distance runners, who give hope, optimism and courage to the next generation of children who need their strength, perseverance and quiet power.

In these new and selected poems Madhubuti, formerly Don L. Lee, places us in lyrical proximity to a legacy of women whose lives he honors with heartwarming verses and timeless reverence. Each poem is a vivid portraiture of the “magnificent energy” emanating from a rainbow of Black women.

In this mosaic collection of poetry, Madhubuti celebrates the luminous spirits of women whose visible ‘greatness’ has left an indelible mark on his life’s work. In Taught By Women, Madhubuti sings their struggles and praises with pitch perfect precision, every note an empowering song and unforgettable melody.

A leading poet and one of the architects of the Black Arts Movement, HAKI R. MADHUBUTI—publisher, editor and educator—has been a pivotal figure in the development of a strong Black literary tradition. He has published more than 30 books (some under his former name, Don L. Lee) and is one of the world’s best-selling authors of poetry and non-fiction. His Black Men: Obsolete, Single, Dangerous? The African American Family in Transition (1990) has more than 1 million copies in print. Three book-length critical studies on Madhubuti’s literary works are New Directions from Don L. Lee by Marlene Mosher (1975), Malcolm X and the Poetics of Haki Madhubuti by Regina Jennings (2006) and Art of Work: The Art and Life of Haki R. Madhubuti by Lita Hooper (2007). His poetry and essays were published in more than 100 anthologies and journals from 1997 to 2019. Madhubuti’s book, Taking Bullets: Terrorism and Black Life in Twenty-First Century America was published in 2016 and he co-edited Black Panther: Paradigm Shift or Not? (2019).

Professor Madhubuti is a proponent of independent Black institutions. He founded Third World Press (1967) and Third World Press Foundation (2002). He is a founder of the Institute of Positive Education/New Concept School (1969), and a co-founder of Betty Shabazz International Charter School (1998), and Barbara A. Sizemore Middle School (2005), all of which are in Chicago. Madhubuti was founder and editor of Black Books Bulletin (1970-1994), a key journal documenting the literature, scholarship and conversations of African American voices for over two decades. He was also a founding member of The Organization of Black American Culture (OBAC) Writer’s Workshop (1968).

Professor Madhubuti is an award-winning poet and recipient of the National Endowment for the Arts and National Endowment for the Humanities fellowships, the American Book Award, an Illinois Arts Council Award, the Studs Terkel Humanities Service Award and others. In 1985, he was the only poet chosen to represent the United States at the International Valmiki World Poetry Festival in New Delhi, India. In 2006, he was awarded the Literary Legacy Award from the National Black Writers Conference for creating and supporting Black literature and for building Black literary institutions. He was named as a 2007 Chicagoan of the Year by Chicago Magazine. In May of 2008, Professor Madhubuti was honored with a Lifetime Achievement Award from Art Sanctuary of Philadelphia.

In 2009, he was named one of the “Ebony Power 150: Most Influential Blacks in America” for education.  In 2010, he was presented with the President’s Pacesetters Award from the American Association of Blacks in Higher Education, and was awarded the Ninth Annual Hurston/Wright Legacy prize in poetry for his book, Liberation Narratives. At the 2013 “Bridge Crossing Jubilee,” Professor Haki R. Madhubuti was inducted into the Hall of Resistance at the Ancient Africa, Enslavement and Civil War Museum in Selma, Alabama; he was honored as the Arkansas Black Hall of Fame 2014 Distinguished Laureate Presenter. In 2014, Dr. Madhubuti received the Barnes & Noble Writers for Writers Award presented by Poets & Writers Magazine; and in April of that year, Dr. Madhubuti and his wife, Dr. Carol D. Lee, were presented with the DuSable Museum’s Dogon Award at the Night of 100 Stars Celebration. In June 2015, Madhubuti was the first poet to receive a Life Time Achievement Award at the Juneteenth Book Festival Symposium at the Library of Congress; in September 2015, Madhubuti was honored by the Congressional Black Caucus Foundation with a Lifetime Achievement Award for Leadership in the Fine Arts; and in November of that same year, he received the Fuller Award from the Chicago Literary Hall of Fame. His most recent recognition includes the 2017 Go On Girl Book Club Literary Legend Award and the 2017 Sutton E. Griggs Tulisoma Lifetime Achievement Award in Literature from Dallas, Texas. In June 2019 he received the Illinois Human Rights Commission (IHRC) Activism in the Arts Award during the celebration of Juneteenth.