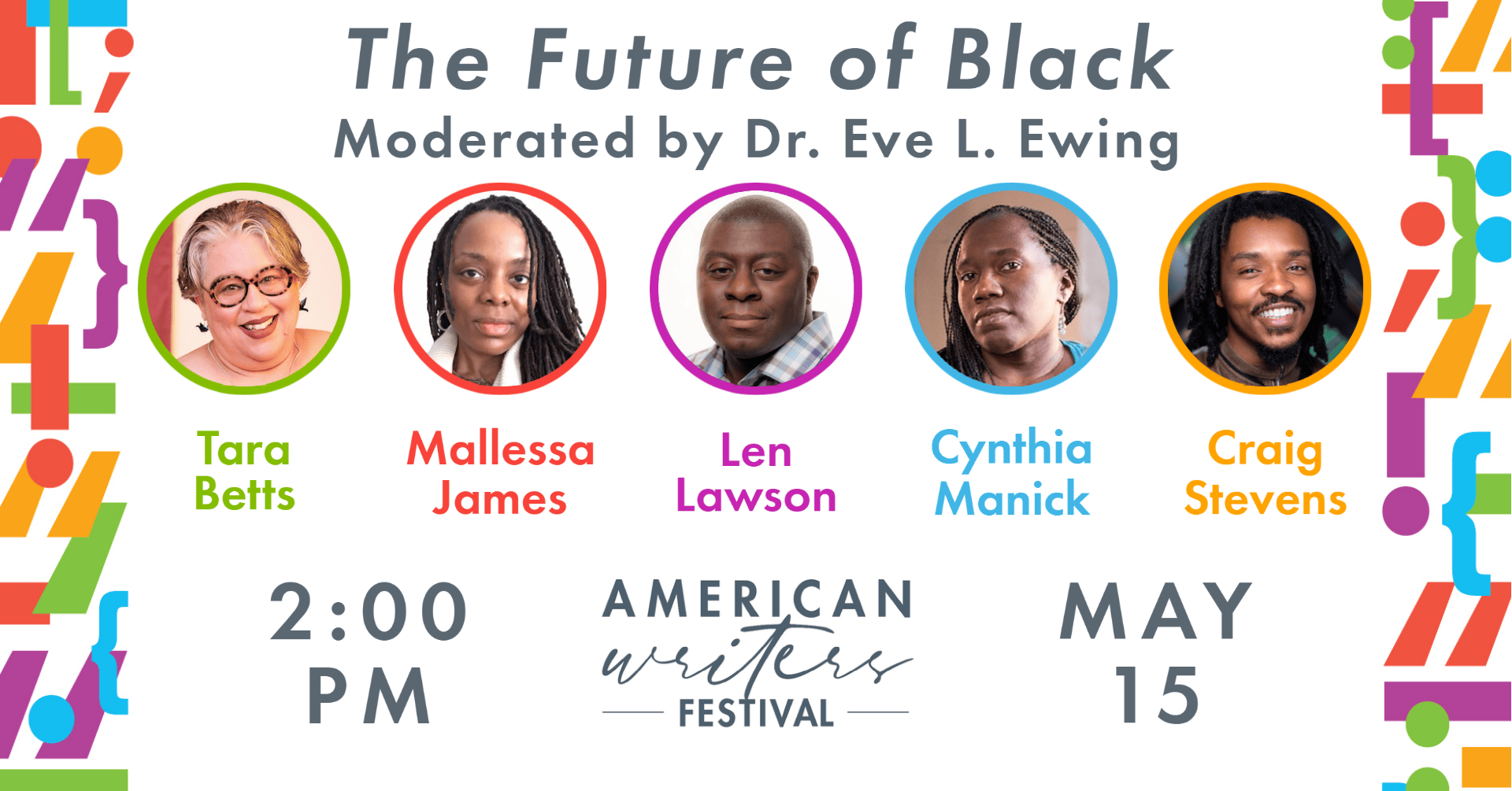 Panel: The Future of Black

About The Future of Black: Afrofuturism, Black Comics, and Superhero Poetry:

The expansion of Marvel and DC Comics’ characters such as Black Panther, Luke Cage, and Black Lightning in film and on television has created a proliferation of poetry in this genre—receiving wide literary and popular attention.

Dr. Tara Betts is the author of Break the Habit, Arc & Hue, and the forthcoming Refuse to Disappear. She is the inaugural Poet for the People Practitioner Fellow at University of Chicago and founder of Whirlwind Learning Center. She is currently teaching poetry classes at Northwestern University.

Mallessa James is an emerging writer and artist whose work explores blackness, science, and theopoetics. Her writing has appeared in The Future of Black: Afrofuturism, Black Comics, and Superhero Poetry; The Black Liberation Blueprint; Gumbo Magazine; Edge Effects; and BLUU Notes: An Anthology of Love, Justice, and Liberation. Originally from the occupied lands of the Ojibwe, Odawa, and Potawatomi Nations (Chicago, Illinois), she identifies as a Black, sci-fi fantasy loving, cis-female person of the global majority; currently resides on the occupied lands of the Powhatan Confederacy (Richmond, Virginia); and enjoys extended walks, expansive conversations, and extra spicy food.

Len Lawson is the author of Chime (Get Fresh Books, 2019) and an editor of The Future of Black: Afrofuturism, Black Comics, and Superhero Poetry (Blair Press, 2021). He has earned fellowships from Tin House, Palm Beach Poetry Festival, Callaloo, Vermont Studio Center, and Virginia Center for the Creative Arts among others. His poetry appears in African American Review, Callaloo, Mississippi Review, Ninth Letter, Verse Daily, and elsewhere. Born and living in South Carolina, Len earned a PhD in English Literature and Criticism from Indiana University of Pennsylvania and is currently Assistant Professor of English at Newberry College.

Cynthia Manick is the author of No Sweet Without Brine (Amistad-HarperCollins, forthcoming 2023), editor of The Future of Black: Afrofuturism, Black Comics, and Superhero Poetry (Blair Publishing, 2021), and author of Blue Hallelujahs (Black Lawrence Press, 2016). Manick is Founder of the reading series Soul Sister Revue and her work has appeared in the Academy of American Poets Poem-A-Day Series, Callaloo, Wall Street Journal, and elsewhere. She currently serves on the board of the International Women’s Writing Guild and the editorial board of Alice James Books.

Craig Stevens (@mrblackatlantic) is an artist academic that writes and curates around themes of transcultural Blackness, freedom making and radical solidarity. He is co-founder of the Black & African Solidarity Show (B.A.S.S.) and a doctoral student in the Northwestern University Anthropology Department.

Dr. Eve L. Ewing is a sociologist of education and a writer from Chicago. She is the author of Electric Arches, which received awards from the American Library Association and the Poetry Society of America and was names one of the year’s best books by NPR and the Chicago Tribune. She is also the author of Ghosts in the Schoolyard: Racism and School Closings on Chicago’s South Side, the writer of Marvel Comics’ Ironheart series, and the co-author (with Nate Marshall) of No Blue Memories: The Life of Gwendolyn Brooks. She is an assistant professor at the University of Chicago School of Social Service Administration. Her work has been published in The New Yorker, The Atlantic, The New York Times, and many other venues.