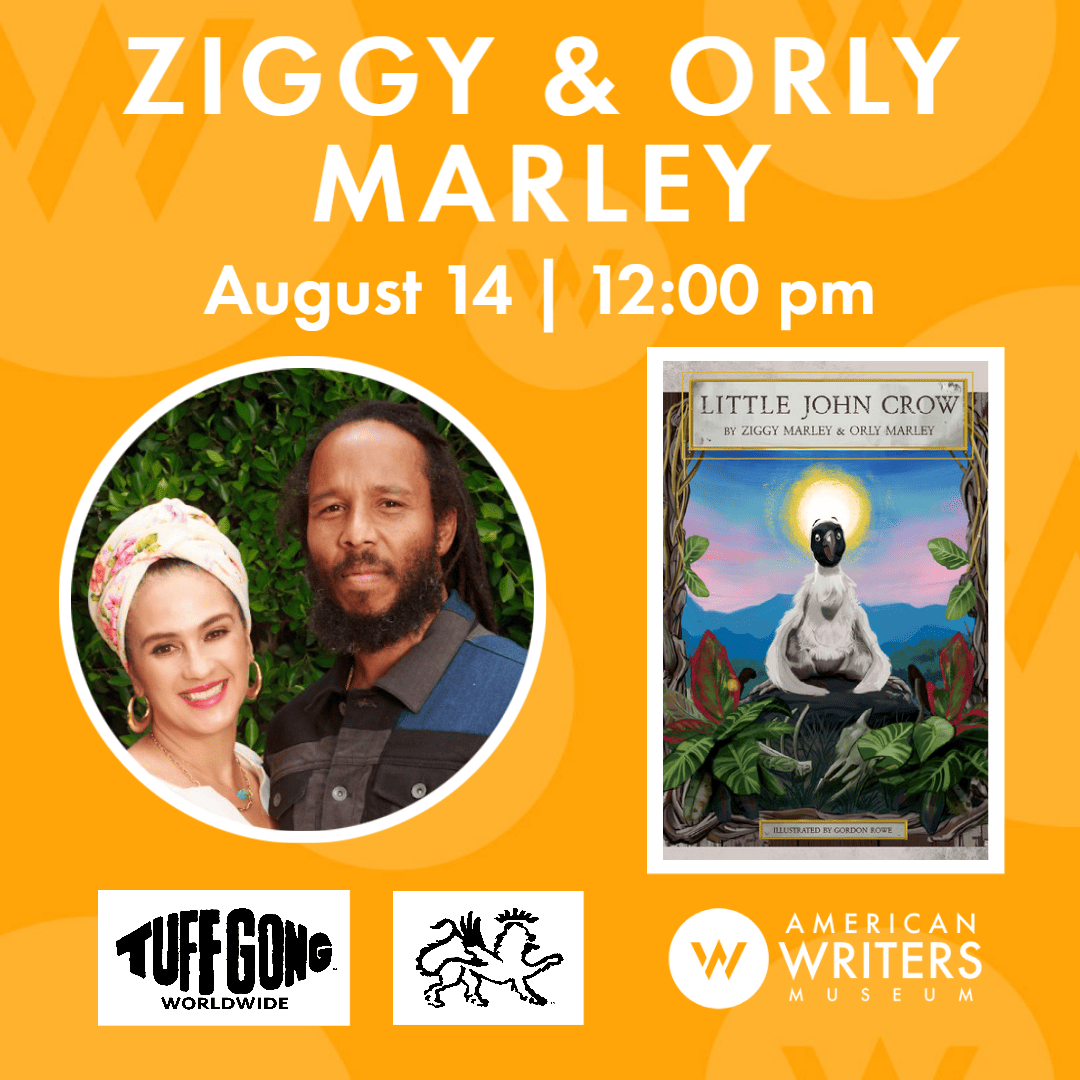 Join us for a special afternoon with Ziggy and Orly Marley, who’ll read and discuss their recent children’s book Little John Crow, beautifully illustrated by Gordon Rowe. After being abandoned by his animal friends, Little John Crow must come to terms with what it means to be part of a community when you are a vulture. This event takes place live and in person at the American Writers Museum.

PLUS! We will be giving away a pair of tickets to Ziggy Marley’s show at Ravinia Festival, taking place later this day. The show starts at 7:00 pm Central on August 14 at the Ravinia Pavilion, learn more here. MUST BE PRESENT TO WIN.

Learn more about Ziggy Marley, Orly Marley, and their work by following @ziggymarley and @tuffgongworldwide on social media platforms. 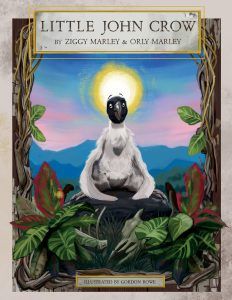 Little John Crow is a young vulture growing up in Bull Bay on the edge of the Blue Mountains in Jamaica, where he lives with his loving parents Sharil and Rusil Crow. He spends his days playing with his friends, a motley group that includes a snake, George; Missy, the French pigeon; Chiqueen, a chicken hawk; Hummy, the hummingbird; and the Three Little Birds.

One morning while the group of friends is relaxing by a cool river, they start chatting about life, their parents’ jobs, and what they want to be when they grow up. As the conversation continues, Little John Crow realizes he has no idea what his parents do for work.

After traveling for days, a tired and hungry Little John Crow is fortunate to be found by a group of vultures. With their support and encouragement, the young vulture learns to embrace his future, and after months away, he returns to Bull Bay just in the nick of time to save his home from ruin.

Filled with humor and memorable characters, Little John Crow reminds us of the importance of accepting our differences and remembering that life offers a place and purpose for all of us.

“In what is a colorful, oh-so joyful children’s book chock full of humor, teachable moments and memorable characters, Little John Crow ultimately reminds us of the importance of accepting our differences (both physical and cultural) and remembering that life offers a place and purpose for all of us.”
—Exclusive Magazine

“The new book by reggae legend Ziggy Marley and his wife Orly is a heartwarming tale of a young vulture in Jamaica’s Blue Mountains learning to embrace his future.”
—Caribbean Journal

“Vibrant artwork and emotional storytelling come together to create a readable, unputdownable story about prejudice, acceptance, and family—the families we’re born into and found families, with a subplot about disrupting ecosystems.”
—Mom Read It

ZIGGY MARLEY has released thirteen albums to much critical acclaim, plus two previous children’s books: I Love You Too and My Dog Romeo; as well the Ziggy Marley and Family Cookbook. His early immersion in music came at age ten when he sat in on recording sessions with his father, Bob Marley. Ziggy Marley and the Melody Makers released eight best-selling albums that garnered three Grammys. Ziggy’s second solo release, Love Is My Religion, won a Grammy in 2006 for Best Reggae Album. His third solo studio album, Family Time, scored a fifth Grammy award for Best Children’s Album. 2016 marked the release of Marley’s self-titled album, which garnered his eighth Grammy. Marley’s new children’s album, More Family Time, was released in September 2020 via Tuff Gong Worldwide.

ORLY MARLEY is an Israeli-born entrepreneur and music manager. Starting her professional career as an assistant at the William Morris Agency, she quickly ascended to director of talent sponsorships, closing a number of worldwide endorsement and sponsorship deals for Enrique Iglesias, Black Eyed Peas, Salma Hayek, Ray Charles, Queen Latifah, Willie Nelson, Aretha Franklin, and many others. In 2004 and 2006, alongside the Marley family, Orly conceptualized and produced the Bob Marley Roots Rock Reggae Tour across the US. After thirteen years at William Morris, she took over the management of her husband Ziggy Marley as well as his record label, Tuff Gong Worldwide, and established his own publishing company, Ishti Music—where she regained all of Marley’s musical compositions. Orly has also worked with Walt Disney Records to produce The Disney Reggae Club album and was instrumental in the promotional campaign for the critically praised Bob Marley documentary film Marley. Together with her husband, Orly heads Unlimited Resources Giving Enlightenment (U.R.G.E.), a nonprofit organization that seeks to make enduring contributions to the lives of children in Jamaica, Africa, and throughout the world. In addition to her professional and philanthropic activities, Orly has recently completed her second term on the Board of Governors for the LA chapter of the Recording Academy; she remains active with them on many creative endeavors.