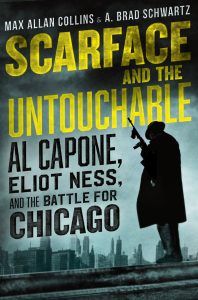 On February 14th, 1929, five killers, dressed as cops, committed one of the most famous murders in Chicago’s history. A great number of books have been written about it as well. Max Allan Collins and A. Brad Schwartz, in Scarface and the Untouchable: Al Capone, Eliot Ness, and the Battle for Chicago, trace the history of this notorious crime. They describe it as “a scene out of Dante’s Inferno.” During this horrific slaughter, seven people were killed and “some men had been shot fourteen times.” It quickly appeared that “only one gang kills like that – the Capone Gang.” As a matter of fact, Al Capone wanted to fight the North Side Irish mafia so that his South Side Italian mafia remained powerful.

As Collins & Schwartz wrote, “the massacre shocked the nation” and Chicago, since then, remains linked to the carnage of these “bloodthirsty killers.” They even claim that “many Chicagoans took a perverse pride in their city’s reputation for gangsterism and corruption.” As Saul Bellow puts it in his famous Chicago novel The Dean’s December (1982): “This is a damn tough city, and damn proud of being tough”

And you, what is your reading preference this Valentine’s Day? Come discover or rediscover the literary history of Chicago and the rest of the country at The American Writers Museum, the only museum of its kind in the nation, celebrating the breadth of American writing through interactive exhibits and programming. Plan your visit here!