How a hero was written.

But who exactly is this new hero, Shang-Chi? To figure out the answer, we’ll need to travel back in time almost 50 years to 1973. As the nation begins to face the aftermath of the Vietnam War and the upcoming resignation of President Richard Nixon, a new craze began to sweep the nation…

Everybody Was Kung Fu Fighting 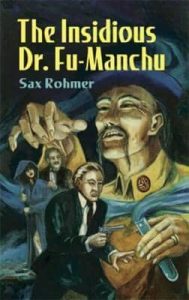 In the 1960s, Hong Kong saw a significant revitalization of kung fu cinema thanks primarily to Shaw Brothers Studios, who released films such as One-Armed Swordsman (1967) and The 26th Chamber of Shaolin (1978). In the US, Warner Brothers saw an opportunity to save some cash by releasing the films of Shaw Brothers Studios (as well as their competitor Golden Harvest) in the West. It is, after all, cheaper to release a movie that’s already been made than make a brand-new movie. This move by Warner Brothers proved to be a financial success when in May 1973, history was made when three foreign films held the top three box office spots for the first time: Fists of Fury (1972), Lady Whirlwind (1972), and Five Fingers of Death (1972).

Marvel Comics saw an opportunity to capitalize on the growing popularity of kung fu in the United States. Initially, the company wanted to license the extremely popular and Emmy-winning television series Kung Fu (1972-1975) but were denied permission by the show’s owner, Warner Communication, due to their connection with Marvel’s rival DC Comics. Instead, Marvel acquired the rights to Sax Rohmer’s pulp villain Dr. Fu Manchu, a brilliant and calculating criminal mastermind and leader of the Si-Fan, an ancient secret society. 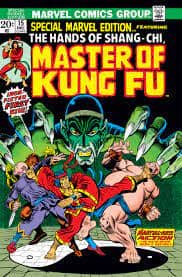 Shang-Chi made his first appearance in the Marvel comic universe in Special Marvel Edition #15 (December 1973). The comic introduced Shang-Chi as the son of Dr. Fu Manchu, who had raised him to be an assassin. In the course of his first mission, Shang-Chi discovers his father’s true nature and vows to fight his father’s ambition for world dominance. The series became an instant financial and critical success. Shang-Chi would continue to appear in Special Marvel Edition #16 and #17 when the title was changed to The Hands of Shang-Chi: Master of Kung Fu. The series was created by comic writers Steve Englehart and Jim Starlin. “I was looking for words that meant what I wanted to say,” Englehart explains. “The 46th hexagram [shēng] is ‘Rising and advancing’ and ‘chi’ is life energy. I put those together. Shang-Chi. Rising and advancing of a spirit. That’s the character I wanted to write.”

Shang-Chi would remain a popular character for many years. His initial comic run lasted until issue #125, published almost 11 years later. He would appear in crossover events with White Tiger, Iron Fist, the Daughters of the Dragon, the X-Men, and Marvel Knights. The character would also make regular appearances in the Deathly Hands of Kung Fu, a black and white comic magazine.

In the late 80s, Marvel allowed their rights to Dr. Fu Manchu to lapse, meaning they could no longer use the character, re-print old editions, or even reference the villainous patriarch by name. Which, in the grand scheme, may have been a good thing. The character was often criticized as a stereotype of the “evil East Asian.” Issues with the character’s design and nonsensical Chinese name led to wide criticism from Asian-Americans. In the 1932 MGM film The Masks of Fu Manchu, the character tells his followers they must “kill the white man and take his women,” leading the Chinese Embassy in Washington, DC to issue a formal complaint against the film. 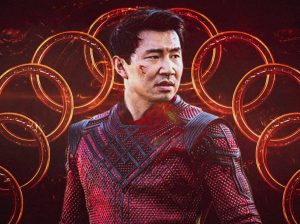 Thanks to the training of his father, Shang-Chi is one of the greatest martial artists on Earth. Classified as a non-superhuman, he has bested many super-powered enemies, including the Olympian Ares. Due to his ability, Shang-Chi is a highly sought-out teacher, mentoring characters including Captain America, Wolverine, and Spider-Man. Many of Shang-Chi’s abilities seem to stem from his mastery of ch’I, the life energy of the universe. He is a master martial artist, skilled gymnast, and highly skilled fisherman. He can control his nervous system allowing him to numb himself to physical pain, resist the effects of poisons, and slow down his bleeding rate. Shang-Chi can lift at least twice his body weight (approx. 350lbs), though his use of ch’I can allow him to temporarily increase his strength to a greater amount.

Marvel Studios have attempted to create television series or films featuring Shang-Chi in the 1980s, 2001, 2003, and 2005. With the success of the Marvel Cinematic Universe, we can finally see the silver screen premiere of Shang-Chi. The film was set to premiere in 2020, but due to the COVID-19 pandemic, was pushed back to September 3, 2021. The film stars Simu Liu (Kim’s Convenience), Awkwafina (Raya and the Last Dragon, Nora From Queens), Benedict Wong (Doctor Strange), Michelle Yeoh Choo-khen (Crouching Tiger, Hidden Dragon, Crazy Rich Asians), and Tony Leung (Hero, Chungking Express).