In July 2020 the American Writers Museum hosted a conversation with screenwriter Sarah Gubbins who adapted the screenplay for SHIRLEY, based upon the novel of the same name by Susan Scarf Merrell. We talked with Gubbins, who is also a playwright, about her writing approach, adapting books into films, and how different mediums affect storytelling. 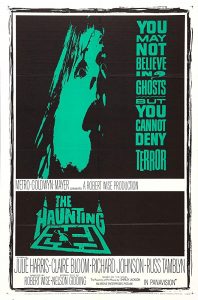 Based on Jackson’s The Haunting of Hill House, the plot remains largely the same. Dr. Markway invites some guests to Hill House to test whether or not the paranormal is real. Hill House has been the scene of several tragic deaths and it seems like the ideal place to bring subjects that have had previous experiences with the paranormal. Nell, a woman who just lost her mother after a long illness and is suffering from what people politely called “nerves” travels to Hill House at the behest of Dr. Markway. She lives there with an artist named Theo and the young heir to Hill House, Luke.

This film relies very heavily on suggestion and the possibility that the main character is not a reliable narrator. The house is full of rickety spiral staircases and even more looming statues that give a similar sense of claustrophobia. There aren’t any concrete answers, so there’s a lot left to the imagination about what actually took place in the seemingly sentient house.

The Haunting of Hill House on Netflix is a great miniseries but it veers so far away from the novel that I would say it’s more inspired by the book than adapted. There was also a 1999 version, and I’m actually sorry I even mentioned it.

The Haunting is available to rent on Amazon Prime. 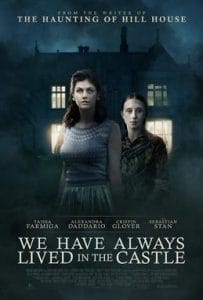 I remember reading Shirley Jackson’s novella and wondering why there wasn’t a movie adaptation. Lo and behold I see the title for rent one day, and decide to watch it without knowing much else.

Merricat Blackwood is an uneasy outsider who lives in a large crumbling house with her sister Constance and delusional Uncle Julian, played by Crispin Glover. (Crispin Glover playing the weird uncle almost feels like typecasting at this point). Life is difficult for the Blackwoods as the town believes that Constance poisoned the rest of their family six years prior, and they make their aggression known when Merricat goes into town for supplies.

Constance never leaves the house and Merricat thinks she and Constance are just fine living like two queens in a castle. But Constance’s head is turned by the arrival of handsome cousin Charles, played by Sebastion Stan. (Damn him and his dimpled chin). Cousin Charles brings with him the promise of the outside world but his intentions don’t always seem pure, much to Merricat’s dismay. She uses protection spells where she buries offending objects on their property in the hopes they will ward away evil, but none remove Charles.

The set design feels reminiscent of Grey Gardens and Merricat seems to manipulate the naive Constance at times to make sure the two of them stay together. The many jars buried on the property are likely to choke the Blackwoods’ garden, and even the floral wallpaper of their kitchen comes to a suffocating end.

We Have Always Lived in the Castle is available on Tubi. 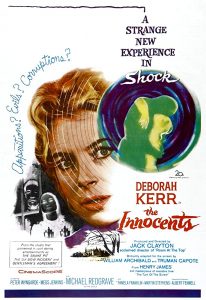 Based on the Henry James novella The Turn of the Screw, governess Miss Giddens is hired by a wealthy gentleman to take care of his niece and nephew at Bly Manor. The children smile a little too sweetly and are prone to some unsettling behavior. Flora, the youngest, coos at a spider eating a butterfly and tells Miss Giddens how much she likes dark rooms. The eldest Miles is expelled from his boarding school for being an injury to the other students and is overly familiar with the governess, playing at choking her and kissing her on the lips.

Miss Giddens discovers that the former governess Miss Jessel and the valet Quint were having an illicit affair before they both died somewhat mysteriously. She starts to see figures around the estate and is almost always certain the children can see them too, though they never admit to it.

One of the real joys of the movie is all of the visuals. Shot in black and white Cinemascope with deep focus photography, every frame is rich in detail. Long shadows loom in the background of extreme closeups and there’s always darkness around the frame. The interior of the house is full of vases of roses and tapestries creating a visual jungle, and the grounds’ ponds and statues are sources of surprising dread. This adaptation was written by Truman Capote who wanted to leave the nature of the apparitions ambiguous, so the question is whether Miss Giddens is the one who’s haunted.

The Innocents is available to rent on Amazon Prime. 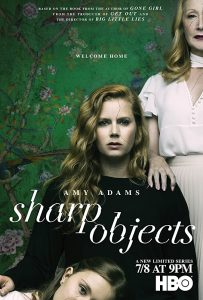 I read Sharp Objects not long after I read Gone Girl, and if you’re a fan of Gillian Flynn’s work it’s no surprise that the story is DARK. Amy Adams plays Camille, a reporter with some self destructive tendencies who goes back to her hometown in Missouri after a young girl is murdered.

She stays with her mother played by Patricia Clarkson who rules over the town and her large Victorian mansion like a Norma Desmond who’s still at her peak. Once again, the house is almost a character with hand painted wallpaper, ivory bathroom tiles, and a custom made dollhouse for Camille’s half sister Amma. Amma allows her mother to fawn over her like a live doll but rules a pack of mean girls outside of the house.

Camille attempts to investigate the murder while keeping her own demons at bay and silently warring with her disapproving mother. The town in general is a gossipy hotbed of boredom and indifferent malice that threatens the investigation. The house and muggy summer setting give the miniseries a Southern Gothic feel. Complete with family secrets and booze-soaked verandas.

Sharp Objects is available on HBO, or on Hulu.