Although the old mantra “Don’t judge a book by its cover” would have us believe that exterior artwork is irrelevant to a novel’s contents, the iconic status achieved by some book covers would suggest otherwise. In this ongoing series, Christian Kriticos reveals the stories behind some of the most celebrated book covers in American literature, and analyzes the impact they have on our understanding of the text itself. 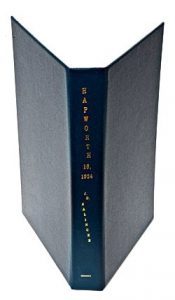 The Catcher in the Rye

J.D. Salinger was notoriously resentful of including cover art and illustrations in his published books, insisting that he did not want to reader to be influenced by any preconceptions forced on them by an outside illustrator. All three of his bestselling short story collections were published with text only on the cover, and an aborted attempt to publish his novella Hapworth 16, 1924 in a new hardcover volume followed his exacting specifications, which included the title and author name on the spine only in a bizarre diagonally descending arrangement. It seems, therefore, to be safe to assume that the iconic cover for The Catcher in the Rye met Salinger’s approval, since he was known to be so strict on the presentation of his works. And indeed, the cover was illustrated by a trusted friend of Salinger’s, E. Michael Mitchell, whom he lived very close to in Connecticut in the early 1950’s. In one reflective letter to Mitchell, Salinger fondly recalls their Connecticut days together, stating “Thank God we had what we had, Mike.” 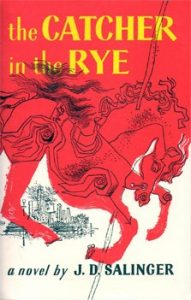 Mitchell’s cover seems to be an illustration of the penultimate chapter of Salinger’s novel, in which Holden’s sister rides a carousel horse in Central Park. However, by featuring this horse image so prominently on the cover, Mitchell also draws the reader’s attention towards the importance of the symbolism of horses throughout the novel.

For example, at the beginning of the novel, Holden remarks on his school’s advertisement, which depicts “some hotshot guy on a horse jumping over a fence.” Since the school does not have a stables, Holden infers that the image is metaphorical, and represents the school’s promise to mold young boys into men, helping them ‘jump the fence’ into adulthood. However, Holden finds himself caught between these two worlds of childhood and adulthood, as represented by his repeated phrase “horsing around”, which he uses to refer to both childish practical joking, and adult intimacy. This implies that Holden is trying to navigate the adult world while still bound to the carousel horse of childhood, and is therefore unable to yet ‘jump the fence.’ 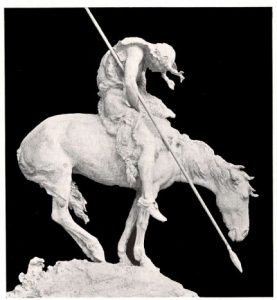 However, Mitchell’s cover, with its blood-red color scheme and implications of impalement (possibly in reference to James Earle Fraser’s famous sculpture The End of the Trail) suggests that this childhood must inevitably die. Holden’s decision not to join Phoebe on the carousel at the end suggests that he has finally come to this realization, accepting the ‘death of his childhood.’ Interestingly, the transition from childhood to adulthood is equated to death in Holden’s dream as well, when he imagines children falling off a cliff, with himself as the designated ‘catcher’ there to save them. It seems, therefore, that as well as being an iconic piece of art in its own right, Mitchell’s cover for The Catcher in the Rye can also be analyzed as a supplemental piece of the text, illuminating the theme of Holden’s reluctant transition into adulthood and his attempts to ‘jump the fence’ whilst still on the carousel horse of childhood. The extent to which Salinger was involved in Mitchell’s work remains unknown, but either way it remains one of the greatest and most enduring book covers of all-time. Sources The Catcher in the Rye by J. D. Salinger ‘THE READ: J. D. Salinger’s Private Letters’ by Ruth Franklin ‘Betraying Salinger’ by Roger Lathbury -Christian Kriticos