Welcome to our Theatrical Reading List, a three-act list of plays by American playwrights curated by AWM staff member Matthew Masino. Matt graduated from Columbia College Chicago with a BFA in Theatre Directing and he really misses live theatre right now. So sit back, enjoy the show and add these plays to your reading list. We’re now on to the third and final act, Behind the Scenes. If you missed them, check out Act I: The Classics and Act II: Contemporary Plays.

As cities across the United States sit in various states of closure, many are looking to books to learn new skills and develop new passions. For the past two weeks, I’ve been sharing some of my favorite Classic and Contemporary works from the American Theatre catalogue. But today, I’m taking you “behind the scenes” to look at books about all the different aspects of theatre, including acting, directing, design, and more! From the moment a playwright puts pen to paper to the final curtain call, writers and artists of all kinds put their whole creative beings into building a world onstage for your enjoyment. I hope these recommendations lead you to greater discoveries and new interests. As always, I’ve included some additional honorable mentions at the end of the article to further spark your interests. Join in the conversation by adding any book you think I’ve missed in the comments. Happy reading! 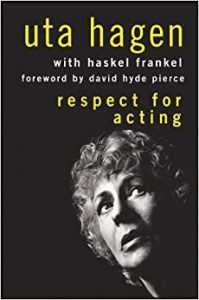 When writing about her time in rehearsal with director Harold Clurman on the national tour of A Streetcar Named Desire, American actress and theatre teacher Uta Hagen wrote, “He took away my ‘tricks’. He imposed no line readings, no gestures, no positions on the actors…He demanded ME in the role. My love of acting was slowly reawakened as I began to deal with a strange new technique.” Through that process, she began to develop her own acting method which she would document in her book, Respect for Acting. Published in 1973, Respect for Acting explores the use of “substitution” (or as Hagen would later rename it, “transference”). The book attempts to guide the reader through practical situations such as staying fresh during long runs or moments when a performer might speak to the audience. Used by colleges and professional training programs across the United States, Respect for Acting is a fantastic tool for actors and directors looking to grow their artistic toolbox.

IMPROV:
Improvisation for the Theatre by Viola Spolin 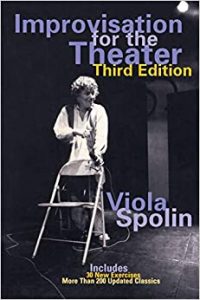 Considered the mother of American improv, actor and educator Viola Spoolin wrote, “Everyone can act. Everyone can improvise. Anyone who wishes to can play in the theatre and learn to become ‘stage-worthy.’” From 1960 to 1965, Spolin worked with her son Paul Sills at his company, The Second City, where she developed and practiced what she called “Theatre Games.” Spolin used acting methods and techniques and developed them into games which allow performers to keep their minds busy while creating, rather than pre-planning or being self-conscious. Today, Improvisation for the Theatre is considered one of the most important books of the modern theatre. Spolin’s work continues to influence American theatre, film, television and the actors, writers, and directors who work in them. She would later go on to publish Theatre Games for the Classroom: A Teacher’s Handbook, Theater Games for the Lone Actor, and Theater Games for Rehearsal: A Director’s Handbook. Earlier this year, Viola Spolin was added to the American Writers Mueseum’s Chicago Gallery where you can find her when we are able to reopen. 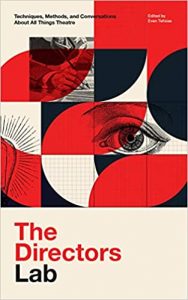 For more than twenty years, directors from across the United States have gathered at Lincoln Center Theatre for three weeks of workshops, masterclasses, rehearsals, and discussions. As the workshop expanded across the world, editor Evan Tsitsias began collecting the conversations which he would eventually compile into The Directors Lab. The newest book on this list (being published on April 7, 2020), The Directors Lab is an epic collection of artistic processes, tools, and advice. While not intended to be a manual, chapters of this book discuss almost every aspect of the directing process including tablework, casting, dress rehearsals, theatre festivals, and much more. Editor Evan Tsitsias wrote of the book, “I want it to serve as inspiration, to ignite a creative spark and add to the communal theatrical flame that we as theatre artists perpetually attempt to keep lit. It’s a call to action, a decree of passion, of connections both personal and artistic. It’s an encapsulation of what theatre is, in this space and time. And yes, fine, perhaps even a manual.” 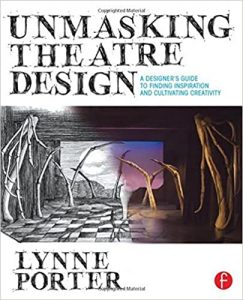 All art and design begins with an idea. Learning where those ideas come from and how to develop them, is a challenge for anyone with a creative mind. In Unmasking Theatre Design, author and designer Lynne Porter examines how artists approach plays and musicals whether their medium is scenery, props, lighting, costume, sound, or projections. Focusing on how designers think and their design processes, this book is a fantastic resource for anyone looking to learn more about the creative design process. Filled with beautiful illustrations and photographs, this book is a great read for beginning designers and anyone interested in the processes of creative people. 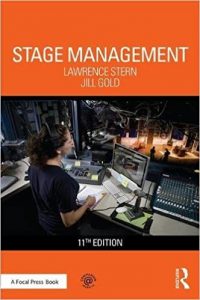 Theatre would not be possible if not for the tireless (and often thankless) work of stage managers. A job that requires a fundamental knowledge of all other aspects of the theatre world and a personality that’s able to work with others, learning management skills can be a huge task. In their book, Stage Management, Lawrence Stern and Jill Gold expand on every aspect of the job including scheduling, budgeting, spiking, cast morale, and even how to work with snow. This book is fantastic for anyone looking to learn more about stage management and is one of the best resources you can find without physically doing the job.

PLAYWRITING:
The Playwright’s Guidebook: An Insightful Primer on the Art of Dramatic Writing by Stuart Spencer 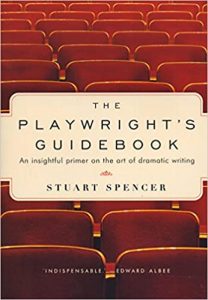 The cow as white as milk, the cape as red as blood, the hair as yellow as corn, and the slipper as pure as gold. Pulling from several Brothers Grimm fairy tales, Into the Woods tells the fractured tale of the Baker and his Wife. Unable to produce a child, the Baker and his Wife must embark on a scavenger hunt through the world of Little Red Riding Hood, Cinderella, Jack in the Beanstalk, and Rapunzel. Into the Woods first premiered on Broadway in 1987 and would go on to win Tony Awards for Best Score, Best Book, and Best Actress in a Musical (Joanna Gleason as the Baker’s Wife). Listen along to the Original Broadway Cast Recording on Spotify or Apple Music. Into the Woods is recommended for readers with an interest in fairytales or are interested in what “Happily Ever After” really means. 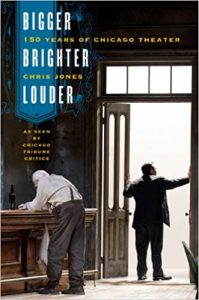 From small storefront theatres to gigantic regional houses, Chicago is considered one of the world’s premiere cities for theatre. In Bigger, Brighter, Louder, Chicago Tribune critic Chris Jones samples reviews and articles from across the last century and a half while also giving crisp historical context all to illustrate the rich history of the Chicago theatre scene. In this book, you’ll learn about the growth and development of Steppenwolf Theater, which grew from small performances in a basement to one of the leading regional theatres in the nation. Discover playwrights and actors who got their start in Chicago theatre including Lorraine Hansberry and David Mamet. This is a great book that is highly recommended for anyone with an interest in theatre and a love for Chicago and its history.

How to Teach Your Children Shakespeare by Ken Ludwig; On Broadway: From Rent to Revolution by Drew Hodges; The Actor’s Life: A Survival Guide by Jenna Fisher; Directing in Musical Theatre by Joe Deer; Sanford Meisener on Acting by Sanford Meisner and Dennis Longwell; Steppenwolf Theatre Company: In Their Own Words by John Mayer; Staging Sex: Best Practices, Tools, and Techniques for Theatrical Intimacy by Chelsea Pace; Harry Potter and the Cursed Child: The Journey Behind the Scenes of the Award-Winning Production by Jody Revenson and Harry Potter Theatrical Productions; The Viewpoints Book: A Practical Guide to Viewpoints and Composition by Anne Bogart and Tina Landau; Creating Musical Theatre: Conversations with Broadway Directors and Choreographers by Lyn Cramer