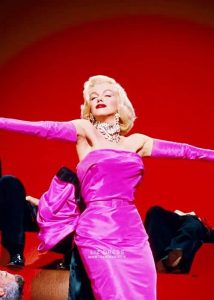 Pink Floyd, Pretty in Pink, the Pink Panther, Degas’ Dancers in Pink, Victoria’s Secret PINK line, Blackpink… The list of cultural and commercial instances of pink is as long as the history of the color. The earliest mention of pink can be found in the Odyssey in approximately 800 BCE. The height of pink’s reign was in the 18th century when the color took the court of King Louis XV of France by storm. While pink is viewed as a feminine color today, it originated in the outfits of young boys. In England, adult men wore red uniforms and, by the logic of the time, boys were just small men, so they wore pink. With the invention of chemical dyes, pink grew brighter and bolder. In 1953, President Dwight D. Eisenhower’s wife, Mamie Eisenhower, wore a pink dress to her husband’s inaugural ball. Historians mark this moment as the start of the gender switch. In nature, pink is the most common color found in flowers. Pink is believed to have a calming effect on the viewer. Many sports teams, including the University of Iowa, have painted their visitors’ locker room a color called “drunk-tank pink,” which has been shown to calm the mind. Now throw on your poodle skirt, hop into your classic pink Cadillac, turn on P!nk’s “Just Give Me a Reason,” and get ready to explore some fantastic works of literature!

“The redness was going out of the light now; the remains of the day were a fading pink, the color of wild roses.”

“On Wednesdays, we wear pink.”

‘What gave it away? The pink shirts, or half our team drooling over you?'”

“Most of the time I meditate on the opposite wall.
It is pink, with speckles. I have looked at it so long
I think it is part of my heart. But it flickers.”

“You, Ms. Lane, are a menace to others! A walking, talking catastrophe in pink!”