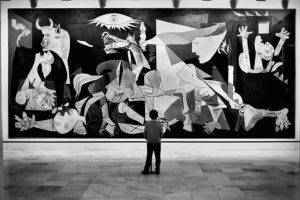 Today, we’re going to take a look at books sharing the color gray, a color defined by its neutrality, sitting on the scale of black and white. Often associated with neutrality, boredom, old age, and indifference, gray has been a staple of fashion and art for centuries. In the eighteenth and nineteenth centuries, gray was commonly used for women’s dresses, men’s waistcoats, and military uniforms. In the twentieth century, gray became a symbol of war and industrialization, as can be seen in Pablo Picasso’s Guernica, an 11ft 5in tall by 25ft 6in wide painting portraying the violence and chaos of the Spanish Civil War. Albert Einstein is said to have worn a gray suit each day to prevent wasting his brainpower when choosing an outfit. In nature, gray can symbolize the oncoming storm or show a person’s age in their hair. We can see gray across pop culture, sports, fashion, and more. There’s no color better suited for such wide use as gray, which was once defined by Sensational Color as “morally ambiguous.”

There is, however, a very important question to ask when talking about gray… or is it grey? Which one is correct? Well, according to Merriam Webster, both are correct spellings for the color! Gray is most commonly used in American English, while Grey is used primarily by British spellers. “Despite the American preference for gray, the spelling grey retains a healthy presence in a lot of cultural references known to Americans, such as Grey Poupon mustard and Grey Goose vodka, both of which originated in France.”

“He walked out in the gray light and stood and he saw for a brief moment the absolute truth of the world.”

“When there are grey skies
I don’t mind grey skies.
You make them blue, Sonny Boy.”

“I looked at him, into his warm gray eyes, and suddenly understood what he was trying to tell me. The message hidden beneath the words.

You are not alone.”

“I am the shade of gray, the glass half empty or full, depending on your view. In my life there has been little that I have done first or better than the one preceding or following me.

“You want a prediction about the weather, you’re asking the wrong Phil. I’ll give you a winter prediction: It’s gonna be cold, it’s gonna be grey, and it’s gonna last you for the rest of your life.”