The authors featured in our exhibit American Voices represent the evolution and flourishing of American writing. Writers of the 1600s and 1700s borrowed forms and themes from Europe, applying them to New World settings and issues. Then, over the course of the 1800s, a new, democratic style emerged, rooted in the way Americans talked and thought. Previously underrepresented voices began to be heard, culminating with an explosion of perspectives in the modern era. Taken together, this rich literary heritage reflects America in all of its complexity: its energy, hope, conflict, disillusionment, and creativity. 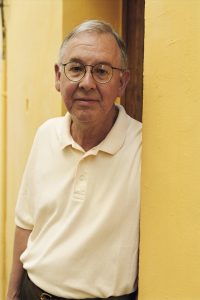 Part Blackfeet and part Gros Ventre, James Welch drew upon a childhood on a Montana Indian reservation for his first published book, the poetry collection Riding the Earthboy 40 (1971). It was, however, the novel Winter in the Blood (1974) that brought Welch national attention. “An unnervingly beautiful book,” according to The New York Review of Books, it featured a nameless, self-destructive Gros Ventre narrator.

Themes of identity and conflict reverberate throughout Welch’s work. In the novel Fools Crow (1986), set during the 1870s, a young Blackfeet debates assimilation to white culture. Welch, wrote Don Lee in Ploughshares, made “it his lifework…to illuminate the richness of his culture and the heartache of its dislocation.

“Have mercy on me, Lord. Really. If I should
die before I wake, take me to that place
I just heard banging in my ears. Don’t ask
me. Let me join the other kings, the ones
who trade their knives for a sack of keys.
Let me open any door, stand winter still and
drown in a common dream.”

In a 1985 interview, Welch discussed whether or not he was primarily an “Indian writer.” “I used to be able to say that I’m an Indian who writes, and I still say that, but more and more my subject matter has been Indians,” he mused. “I seem to be becoming more and more of an Indian writer.” At the same time, he resisted categorization. “I think ethnic and regional labels are insulting to writers and really put restrictions on them,” he said later. “People don’t think your work is quite as universal.”