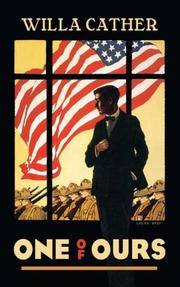 In 1922, Willa Cather’s foray into the subject of World War I, One of Ours, was published by Knopf. The novel follows Claude Wheeler, a young Nebraskan who has become disappointed with the monotonous direction of his life. Wheeler yearns to dedicate himself to something besides the years of farming and marriage which stretch out before him. He enlists in the war, and finds an almost overwhelming sense of purpose in his new role. The novel won the 1923 Pulitzer Prize for the Novel, and brought a broader readership to Cather’s earlier works. Yet, Cather’s One of Ours did not manage to win over its critics.

In his review of the book, H.L. Mencken panned the novel. He wrote that it “drops precipitately to the level of a serial in The Lady’s Home Journal.” Another critic who had formerly supported Cather’s writing, Sinclair Lewis, hailed the first part of the book, but found the chapters dealing with Wheeler’s war service to be inauthentic. Sidney Howard wrote that the second half of Cather’s novel was “a potpourri of soldier yarns and impressions of Rheims two years after, amalgamated into a ‘Saturday Evening Post’ version of ‘Three Soldiers.’” Perhaps the worst critic of One of Ours was a fellow writer, Ernest Hemingway, who had served as an ambulance driver on the Italian front during the war. “Wasn’t that last scene in the lines wonderful?” Hemingway wrote to Edmund Wilson. “Do you know where it came from? The battle scene in Birth of a Nation. I identified episode after episode, Catherized. Poor woman, she had to get her war experience somewhere.”

The idea for the novel had occurred to her in 1918, when she learned of the death of her cousin, Grosvenor Cather, who died in battle in Cantigny, France. “From that on, he was in my mind,” Cather revealed in a letter to fellow writer Dorothy Canfield Fisher, “the too-personal-ness, the embarrassment of kinship, was gone. But he was in my mind so much that I couldn’t get through him to other things … some of me was buried with him in France, and some of him was left alive in me.” In 1919, she began to write One of Ours, which she intended, as she wrote to Canfield Fisher, to be a story about her cousin, who “could never escape from the misery of being himself, except in action.” In confidence to Canfield Fisher, Cather predicted poor sales, and hoped that her book would not be marketed as a war story, as she felt it was about something else entirely. 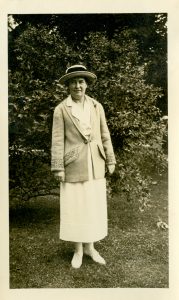 One of Ours marked a departure from accounts of Western life for Cather; the foray into military life and foreign lands was new territory. To construct Wheeler’s character and experiences, she used her cousin’s letters, and the letters of other war veterans. She interviewed veterans and wounded soldiers in hospitals, and visited French battlegrounds. Cather was the first to acknowledge that the subject matter was outside of her comfort zone, but claimed that writing the novel “stood between me and anything else.”

One of Ours enjoyed steady sales, outweighing its writer’s expectations. Unfortunately, Cather’s lack of firsthand experience with the war was a fact her male peers would not allow anyone to forget. The attention the novel received irked some of her critics, some of them veterans of the war, who felt that she had written a romanticized account, and likened the book to a piece of propaganda which cast the war in an inspirational, idealistic light. Most of the book’s worst critics overlooked the possibility that the romantic battle scenes were intended, in part, to support the book’s theme, and the ideals of its restless narrator. Instead, critics used the situation as an opportunity to warn “lady novelists” to stick to writing what they knew. Mencken, Lewis, and Hemingway seemed to conclude that Cather should not have reached outside of her Western, and feminine, experience, but it was Sidney Howard who wrote that women who disregarded the “woman’s method of novel writing” could only produce “shoddy merchandise.” He urged Cather to “stick to her own farms and farmer folk.”

The idea of authority of voice, of personal experience, is important to writing, but not paramount to the creation of a unique and impactful piece of work. Against her wishes, Cather’s novel has gone down in history as a war story, and in the end, the question it begs is this: who decides the validity of a writer’s experience as it relates to their work?

Fortunately, writers have always reached to the boundaries and beyond to tell their stories, and the approach has brought forth fearless new voices.