Celebrate National Coming Out Day (October 11) with these “coming out” stories.

Today, October 11th, 2021, marks the 33rd anniversary of National Coming Out Day. Thirty-three years ago, half a million people participated in the National March on Washington for Lesbian and Gay Rights to call on President Ronald Reagan to address the HIV/AIDS epidemic, which had killed more than 40,000 people at that time. On the first anniversary of the march, Rob Eichberg, a psychologist and gay rights activist, and Jean O’Leary, the head of the National Gay Rights Advocates, marked the first National Coming Out Day to celebrate queer identities of all kinds. Their goal was to remind the nation that hate and homophobia thrive in silence.

The term “coming out” evolved from the phrase “coming out of the closet,” which describes the moment when people in the LGBTQ+ community share their sexual orientation and/or gender identity with their friends and family. No two coming out stories are the same, but all coming out stories show moments of extreme vulnerability and courage. There is no correct way or right moment to come out. British poet Dean Atta wrote, “Don’t come out unless you want to. Don’t come out for anyone else’s sake. Don’t come out because you think society expects you to. Come out for yourself. Come out to yourself. Shout, sing it. Softly stutter. Correct those who say they knew before you did. That’s not how sexuality works, it’s yours to define.”

Today, the American Writers Museum is excited to share seven works of American writing that showcase the diversity of the queer experience. Do you have a piece of “coming out” writing that is close to your heart? Share it in the comments below! 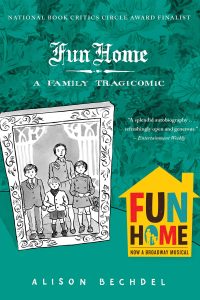 Alison Bechdel’s award-winning graphic novel chronicles Bechdel’s real-life relationship with her family, specifically her father, Bruce. Her father was a high-school English teacher and director of a funeral home (known lovingly to the family as Fun Home). After Alison goes to college and discovers she is a lesbian, her father’s closeted homosexuality and secret past are revealed. Fun Home touches on themes of sexual orientation, gender roles, emotional abuse, and the role of literature in self-discovery.

In 2013, Bechdel’s black line art drawings were adapted to the stage in Fun Home: The Musical. The musical, which would go on to be a finalist for the 2014 Pulitzer Prize for Drama and win the 2014 Tony Award for Best Musical, featured book and lyrics by Lisa Kron and music by Jeanine Tesori. The musical is considered the first mainstream musical about a young lesbian. You can listen to the original Broadway cast recording of Fun Home on Spotify or Apple Music, and scoop up a copy of the book at Bookshop.org.

Inspired by and set in the same world as the 2018 film Love, Simon (which was based on the novel Simon vs. the Homo Sapiens Agenda by Becky Albertalli), Love, Victor follows Victor Salazar, a teen from a half Puerto Rican, half Columbia-American family, who’s moved from Texas to Atlanta. As Victor adjusts to a new city, he embarks on a journey of self-discovery as he struggles with his sexual orientation. In the ninth episode of the series, Victor (portrayed by Michael Cimino) finally works up the courage to come out to his awkward next-door neighbor and best friend Felix (portrayed by Anthony Turpel).

According to Hulu, Love, Victor was the most-binged drama series in 2020. The series has a 90% approval rating on Rotten Tomatoes. On Friday, July 30th, the show was renewed for a third season. You can watch the first two seasons of Love, Victor, now on Hulu. 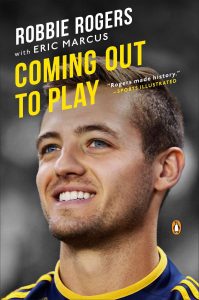 Coming Out to Play

Robbie Rogers started playing soccer at the age of four. At sixteen, he was a two-time High School All-American in soccer. At nineteen, he signed his first professional contract with the Dutch team Heerenveen. He would go on to play for the Columbus Crew, Leeds United, and the Los Angeles Galaxy. More importantly, in 2013, Robbie Rogers would become the first openly gay professional athlete in all of North America. His book, Coming Out to Play, co-written with Eric Marcus, details Rogers’s struggle to accept himself and his sexuality while being paralyzed with the fear of losing the love of his family and his career as a professional soccer player. In an interview with the LA Times, Rogers said, “I was just sitting in my apartment in London and felt like [coming out] was something I wanted to do… Everything that I thought was going to happen didn’t happen. I was afraid to come out to my family, and they were very supportive. I was afraid then to come out to the public, and the reaction I received from all over the world, from straight people, from gay people, from the young and the old, was so supportive.” 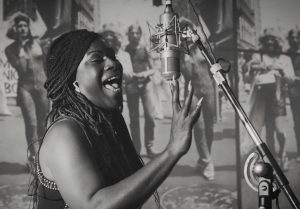 Born in rural Arkansas, Shea Diamond knew she was different at a very young age. At 14, she ran away from home for fear that she wouldn’t be accepted in her home or community. When she was 20 years old, Diamond was sentenced to ten years in prison after robbing a convenience store in an attempt to pay for gender affirmation surgery. She was convicted and placed in a men’s prison—a dangerous practice by the state that puts trans women at risk for emotional and physical violence. In prison, Diamond used Kool-Aid to stain her lips a cherry red. She met like-minded trans people who shared their stories with her. Through these conversations, Diamond discovered her own trans identity. It was in prison that she began writing her first single, “I Am Her,” which was actually first meant to be a “last testament.” Fearing that she wouldn’t make it out of prison alive, Diamond wrote “I Am Her” as a record of her state of mind and shared it with other inmates. Upon her release in 2009, Diamond moved to New York and began a vibrant musical career. In an interview with GO Magazine, Diamond noted, “All you can do, is continue to survive. Every day that you survived, it’s another day you have to fight to thrive…Surround yourself with people who love and support you before you get known. Honor those people.” You can listen to Shea Diamond’s music now on Spotify and Apple Music. 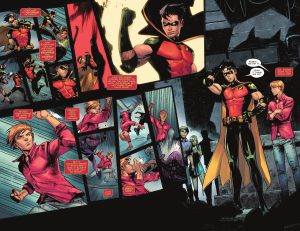 “Sum of Our Parts”
from Batman: Urban Legends #6

“Ever have a lightbulb moment? Like something out in the ether has been taunting you, teasing you. Like you’re supposed to be on the same page as your brain but not everything made sense. People keep asking me what I want. But I couldn’t grasp it. Whatever it was. It always felt just out of reach. Until now. Until right now.”

Batman: Urban Legends is a new anthology series from DC Comics. In each issue, multiple creative teams work together to tell the stories of different citizens of Gotham City. In “Sum of Our Parts,” Tim Drake (a.k.a. the third Robin) wrestles with uncertainty “in a way that has become core to his character over the last decade.” He doesn’t truly know what he wants until Bernard wistfully refers to their interrupted dinner as a “date” and Tim has a “lightbulb moment.” This “lightbulb moment” leads to a moment of self-realization for Tim about his identity as a queer man. Suspicion surrounding Tim Drake’s sexuality has existed since the character first premiered in 1989. Even before that, the nature of Batman and Robin’s relationship (first appearing in April 1940) have consistently been the subject of analysis and homophobia. This reveal from Tim Drake is a resounding response to the homophobic jokes from the previous decades. In an interview with Polygon, writer Meghan Fitzmartin noted that she didn’t want to label Tim’s sexuality just yet, saying, “I wanted to pay tribute to the fact that sexuality is a journey. Tim is still figuring himself out. I don’t think he has the language for it all…yet.” 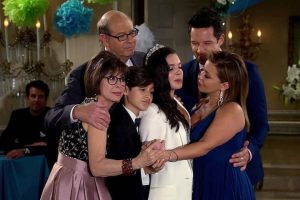 One Day at a Time premiered on January 6, 2017, and told the story of a contemporary Cuban-American family. The show is a remake of the 1975 series of the same title created by Norman Lear. The show features an ensemble cast including Rita Moreno, Justina Machado, Todd Grinell, and Isabella Gomez. The show centers on Penelope Alvarez, an Army veteran and single mother who, upon returning to civilian life, is forced to deal with PTSD, single life, her kids, and her Cuban mother. While Penelope is dealing with her new life at home, her daughter, Elena, is struggling with her sexuality and the possible repercussions of coming out to her religious family. Over the course of the season, she comes out to her brother, then her mother, and finally her grandmother finding love and support with each person. In the season finale, however, Elena comes out to her father while practicing their father-daughter dance for Elena’s quinceañera. Despite pleas from Penelope, Elena’s father abandons her on the dance floor when he sees that Elena has chosen to wear a white suit instead of the traditional gown. Heartbroken, Elena realizes that her father left. But it’s not long before her mother, brother, grandmother, and neighbor join her, reminding her that she is not alone and is loved. Despite the show’s critical acclaim, One Day at a Time was canceled (twice), but you can watch the first three full seasons of the Alvarez family on Netflix. 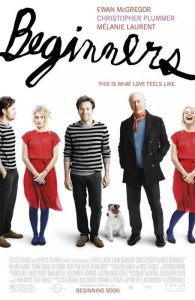 Beginners is a 2010 romantic comedy-drama written and directed by Mike Mills. The film is based on actual events from Mills’s life when his own father came out at 75. The film tells the story of Oliver (Ewan McGregor), who, after the death of his father (Christopher Plummer) from terminal cancer, reflects on his father’s life and attempts to start a relationship with a new woman, a French actress named Anna (Mélanie Laurent). In a series of flashbacks, we learn Oliver’s father, Hal, decided to come out of the closet shortly after the death of his wife and Oliver’s mother. Hal begins exploring life as an openly gay man and finds love with the much younger Andy (Goran Višnjić). Inspired by his father’s attitude toward life, Oliver pursues a relationship with Anna after Hal’s death. Beginners won the 2011 Gotham Award for Best Feature, sharing it with The Tree of Life. Check out the trailer for Beginners here.

For more resources, visit the Human Rights Campaign’s Coming Out Center. If you or a loved one is struggling with mental health issues, you can reach out to a trained crisis counselor 24/7 at the Trevor Project by calling TrevorLifeline at 866-488-7386, texting “START” to 678678 for TrevorText, or by visiting TrevorChat.org. You are not alone.