Since October 16, we’ve been giving two Edgar Allan Poe themed tours a day at the American Writers Museum. They end today, so just in case you missed them, we thought we would share the experience with our fans nationwide! 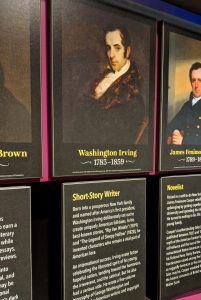 Follow along as we go on a tour of the Museum, focused on the king of Halloween spookiness himself!

We begin with Washington Irving, by some described as America’s 1st Fantasist. You probably remember him from “The Legend of Sleepy Hollow,” but he wrote many short stories. Although he contradicted his writing style, Poe was a fan of Irving. Irving encouraged other authors and Poe sought his advice for some of his stories, including “The Fall of the House of Usher.” 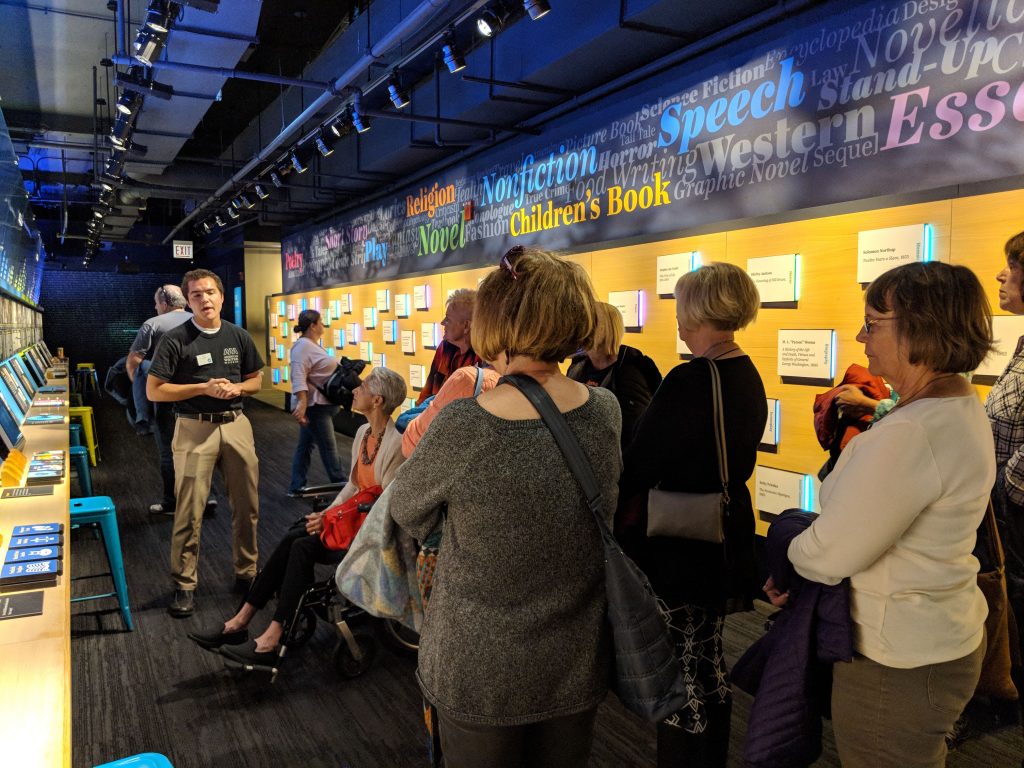 Edgar Allan Poe is featured just a bit further down in our Nation of Writers timeline. As a poet and fiction writer he had an enormous impact on literature in the U.S. and around the world. Poe had a difficult life, marked by personal loss and professional disappointment. In fact, his work was mostly disparaged in his lifetime in part because it was so advanced for its time.

He was a visionary critic and a major forerunner of the aesthetic movement which emphasizes “art for art’s sake.” He believed that that works of art should be appreciated purely for the beauty in themselves.

Although born in Boston he is forever linked to Baltimore where he lived at the time of his death. 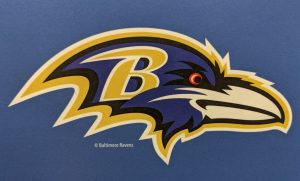 Fun fact: Baltimore’s NFL team is named after his famous poem “The Raven”

Poe is credited with crafting several forms of short fiction including horror, science fiction, and the detective story. A monumental force in influencing the role of psychology in fiction, extending not only to literature but even to modern day cinema as well in the form of the psychological thriller. He may not have been the inventor of these forms, but he certainly influenced how we perceive them today. 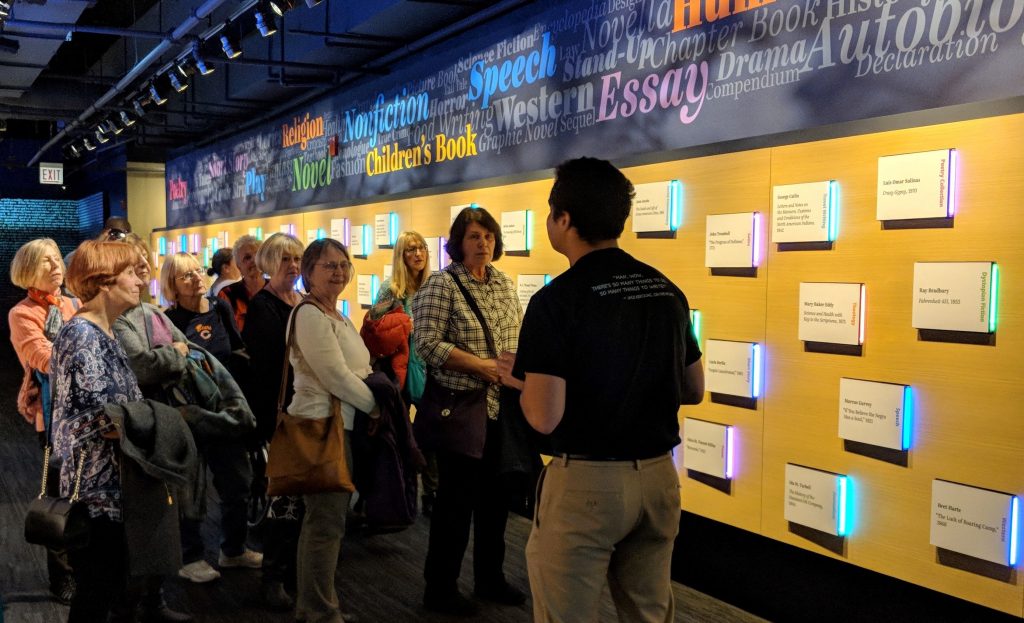 Across the hall, the Surprise Bookshelf features writers that were inspired by and continued with these forms of writing. H.P Lovecraft greatly admired Poe and credits using his style as a model in writing  horror fiction. Patricia Highsmith, who coincidentally shares a January 19th birthday with Poe, considered him one of her heroes. Known for constructing characters with psychological obsessions, her works are filled with murder, mystery and suspense. Ray Bradbury, a master in science fiction began reading Poe at the age of 8.

Fun Fact: Poe even appears as a character in Bradbury’s short story “The Exiles” 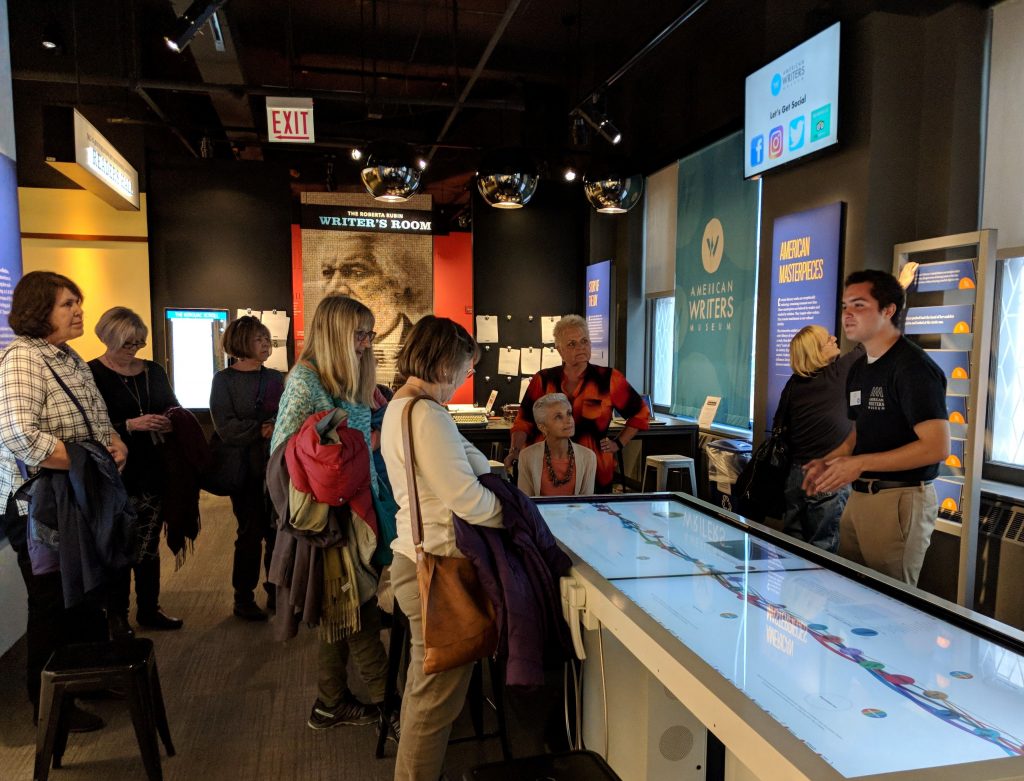 Walking through Readers Hall, visitors were greeted by spooky story-telling as readings of Poe’s works murmured ominously overhead. This led them to the Mind of a Writer Gallery, where one of our most popular exhibits is the Featured Works tables. Featured in the interactive table, you can explore the story behind “The Fall of the House of Usher.”

The emblem of the collapsing mansion was chosen because it is the backdrop to this tale of terror. It gives a visual to the thrilling use of foreshadowing in the character of Roderick Usher to build to a climax and shows Poe’s ability to build suspense. The Featured Works tables also allow you to explore an excerpt read out loud and examples from several illustrated editions of the short story.

Our tour concludes with a piece of trivia further down the hall. Guess this famous literary work, and when it was published! Post your answer in the comments!

Know any other interesting Poe facts? Learn anything new? Just want to know what that pesky first line is from? Comment below to stay connected.