American writers find inspiration for their work from a variety of diverse sources and experiences. Stephen King was inspired to write The Shining when he and his wife were the only two guests staying at the Stanley Hotel in the Rocky Mountains just before it closed for winter. Suzanne Collins was inspired to write The Hunger Games after watching television when a news channel and children’s show melded in her mind to create the dystopian world we now know as Panem.

While authors like Stephen King and Suzanne Collins found inspiration in the world around them, many authors look to the past for their next bright ideas. Today, we’ll look at eight contemporary works that found inspiration in Ancient Greek mythology and storytelling. In addition to information about each work, I’ve also included links where you can learn more about the original Greek myths that inspired these works. Which of these pieces are your favorite? Did I leave any off the list? Let me know in the comments below! 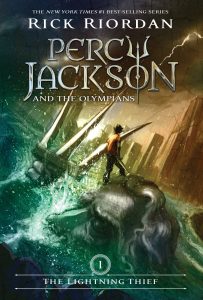 12-year-old Percy Jackson is on the most dangerous quest of his life. With the help of a satyr and a daughter of Athena, Percy must battle Medusa, a Fury, and other mythological enemies to catch the thief who has stolen the original weapon of mass destruction: Zeus’ master bolt. Author Rick Riordan began developing The Lightning Thief when his son, Haley, asked his father to tell him stories from Greek myths before bed, having started studying them in his second-grade class. Soon, he ran out of myths to share with his son and began making up new stories inspired by the characters from the ancient myths. At around the same time, Riordan’s son was diagnosed with ADHD and dyslexia which Riordan made part of a demigod’s power — heightened battle reflexes and a brain wired to read Ancient Greek rather than English. The book would later be adapted into a 2010 film starring Logan Lerman, a critically acclaimed audiobook, and a 2019 Broadway musical. It was recently announced that a new series based on the book would be made for Disney+.

Click here to learn more about the Olympian Gods in Greek mythology.

Intertwining two mythic tales — that of young dreamers Orpheus and Eurydice, and that of Hades and his wife Persephone — Hadestown takes audience members on an epic, musical journey to the underworld and back. Premiering at the Walter Kerr Theatre on Broadway in 2019, this Tony and Grammy award-winning musical first appeared in the town of Barre, Vermont in 2006. American musician, singer-songwriter, and playwright Anaïs Mitchell described this first incarnation of the work as “a D.I.Y. theatre project.” After releasing a concept album of the musical in 2010, Mitchell met with director Rachel Chavkin and the two began to rewrite and rework the production to include additional songs and dialogue and deepen the relationships and the stories of the characters onstage. The original Broadway cast included Reeve Carney, Eva Noblezada, André De Shields, Patrick Page, and Amber Gray. You can listen to the Original Broadway Cast Recording on Spotify or Apple Music.

Learn more about the myth of Orpheus and Eurydice by clicking here.

In another take on the myth of Orpheus and Eurydice, acclaimed author Lilliam Rivera sets that ancient Greek myth on the streets and sidewalks of the Bronx featuring contemporary Afro Latinx characters. Eury, haunted by an evil spirit, moves to the Bronx with her family after losing everything in Hurricane Maria. Here she meets Pheus, a “golden-voiced, bachata-singing charmer” and the two fall for each other, though the world seems dead set on tearing them each other. They must fight for each other and their lives. As the publisher says, Rivera “blends a touch of magical realism into a timely story about cultural identity, overcoming trauma, and the power of first love.” We had the pleasure and honor of hosting Rivera for a virtual program in November of this year, which you can view below.

The Song of Achilles: A Novel

Winner of the 2012 Orange Prize (now known as The Women’s Prize for Fiction) and a Stonewall Honor Book, The Song of Achilles is a 2011 novel by Alex Award-winning author Madeline Miller. The novel retells the story of Achilles and the Trojan War found primarily in Homer’s The Iliad. This action-packed adventure and epic love story follows Patroclus, an awkward prince, who, after being exiled from his kingdom, meets the young hero Achilles who takes him under his wing. As they grow together and learn skills in the arts of war and medicine, their bond blossoms into something much deeper. When word comes that Helen of Sparta has been kidnapped, Achilles is called to battle and Patroclus must choose between love and fear. When discussing her inspiration for adapting the myth to a novel, Miller explained:

“I stole it from Plato! The idea that Patroclus and Achilles were lovers is quite old. Many Greco-Roman authors read their relationship as a romantic one—it was a common and accepted interpretation in the ancient world…For me, the most compelling piece of evidence, aside from the depth of Achilles’ grief, is how he grieves: Achilles refuses to burn Patroclus’ body, insisting instead on keeping the corpse in his tent, where he constantly weeps and embraces it—despite the horrified reactions of those around him. That sense of physical devastation spoke deeply to me of a true and total intimacy between the two men.”

This tender love story between the two men is Miller’s debut novel. Her second novel, Circe, was released in 2018 and explores the enchantress’s story in Homer’s Odyssey.

Click here to learn more about the myth of Achilles.

Iphigenia and Other Daughters

Explore the stories of the “other daughters” of Greek mythology. In this three-play cycle, playwright Ellen McLaughlin mixes contemporary and poetic language to retell the story of the fall of the House of Atreus. The story is borrowed from Euripides’ Iphigenia at Aulis, Sophocles’ Electra, and Euripides’ Iphigenia at Tauris but works to put the women in the spotlight by giving each their own distinctive point of view on the troubles plaguing the House of Atreus. The work focuses on the children of Clytemnestra and Agamemnon, who are both players and victims of the family tragedy and the inescapable cycle of blood and vengeance. The prologue, made of alternating monologues by Iphigenia and Clymenestra, ends with Iphigenia realizing her place in history as an object of the male gaze:

“And all the eyes are on me
Visible me
This is a terrible place
Something must be done
(Silence.)
Ah. I see.
I was right
Here is my husband
This ancient stone
And the quick shadow of the knife
I am to marry everyone
Every single one
This is what it is at last.
(Blackout. Sound of wind.)”

Click here to learn more about the myth of Agamemnon and Iphigenia.

After successfully adapting the Middle Eastern folk tale collection, The Thousand and One Nights, into their Academy Award-winning film Aladdin (1992), Disney looked to other parts of the world for inspiration. After passing on opportunities to adapt works like The Odyssey, Around the World in Eighty Days, and Don Quixote, Disney settled on adapting the Greek myth of Hercules for film. The story follows Hercules and his quest to return to Mount Olympus and be with his father and mother. With the help of his trusted steed Pegasus and Phil, a feisty personal trainer, Hercules works to prove that he can become a true hero. Along the way, he meets Grecian beauty Meg and the Lord of the Underworld, Hades, who has a plan to take over the universe. Hercules was released in 1997 and became the eighth film of the Disney Renaissance.

Disney took considerable liberties with the “Hercules” myths since most of the original story would be deemed inappropriate for family audiences by the Disney studio standards. While writers consulted the works of Greek historians and translators like Thomas Bullfinch and Edith Hamilton, they decided to portray a more unique version of Hercules’ myth. Writer and director Ron Clements said that because of Zeus’ infidelity with Hera in the original myth, “that illegitimacy would be difficult subject matter for a Disney movie. So [he and John Musker] thought of different ways he could be half-man and half-god. [They] moved more toward making Hades the villain instead of Hera.” The film was also inspired by athletes and celebrities of the contemporary era with the filmmakers remarking that Hercules was the Michael Jordan of his era.

While the film was praised by many critics, it was absolutely panned by the Greek media and the Greek public. Adesmevtos Typos, a Greek newspaper, called the film “another case of foreigners distorting our history and culture just to suit their commercial interests.” Despite that, Hercules has gone on to spawn a TV show, video game, and an upcoming Broadway musical and live-action film adaptation. Hercules can now be streamed on Disney+.

Click here to learn more about the (real) myth of Hercules.

First published in the collection Body of This Death: Poems (1923), “Medusa” details an interaction between the speaker and the mythological Gorgon sister, Medusa. The collection of poems investigates the theme of betrayal, specifically sexual betrayal, and addresses the author’s undecided relationship with lyrical poetry. Brett C. Miller, Professor of American Literature at Middlebury College, once named poet Louise Bogan, “one of the finest lyric poets America has produced.” In addition to poetry, Bogan also reviewed poetry in the New Yorker for 38 years. You can read the full poem here.

Click here to learn more about the myth of Medusa.

Originally released in 1976, “God of Thunder” is a song from American rock band Kiss from their album Destroyer. Though it’s primarily known as the signature song of KISS frontman Gene Simmons, it was actually written by his bandmate Paul Stanley. Stanley, who was originally planning to sing it himself, wanted a song that lauded him as the “God of Thunder” and Rock and Roll. When album producer Bob Ezrin heard the song he loved it but made the decision instead for Simmons to lead the song in a slower tempo and a menacing tone. In the background of the song, Ezrin also added a variety of alternative sounds including explosions, clapping, zippers, overdubbed audience chatter, and the voices of his own children recorded over walkie-talkies. When performed live, the lyrics come alive with the band’s signature blood spew. Check out this clip from KISS Rocks Vegas, recorded live at the Hard Rock Hotel in 2006.

But first, click here to learn more about the Greek God of Thunder, Zeus.