Keah Brown on Activism and the Writing Process

Writing is my first love. Long before I was ever sure I could make a career out of it; I could be found on my bedroom floor writing out bad songs and poetry that felt like strokes of genius at the time but read back like every cliché I have ever loved. The truth is that I wish I still had those notebooks of songs and poetry and that I didn’t throw them away the minute I turned seventeen, chalk full of embarrassment and shame. I remember them being my place for voice, for longing, for power, and for activism. What I know now at 28, that I didn’t know when I was writing these things in my old blue notebook that became a red one, that became a black notebook, was that I had been an activist my whole life in small ways, well before I took the label online. 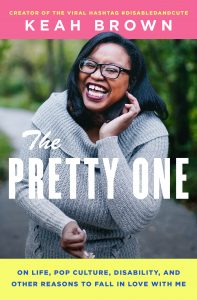 Embracing the label took some time, because I was resentful of the idea that I couldn’t just be a writer and journalist and nothing else. I know better now, because now I know that activism is worthy and necessary work and it is an honor to do it. Still, when someone asks me what I do for a living I tell them that I am a journalist and writer, first. In placing them first, it is an acknowledgement of the degree I have and the skill and effort it takes to be both a writer and journalist. The second reason that I list them first is because people often erase them from my resume in favor of calling me an activist with the implication that I have stumbled upon my own success, lucked into it by chance despite the reality of hard work, actual skill, and determination. However, when I say that I am an activist as well, I say so with the most pride. The pride comes from using my voice and my platform to try and make genuine change for the people like me and those who are not but are marginalized just the same.

I write to help foster that change. I write to say “I am here, and I will not apologize for the space I take up in the world.” And I write because it is what I am called to do and because I love it. As I write, I only think about what I want to say and how to say it. Often, my activism takes form in my existence because living in a world that often does not think of you with regard to design, media representation, or values your lives in terms of justice or deserving of the pursuits of life, liberty, and happiness, just getting up every day and trying to live a life you can be proud of is revolutionary. Fighting for your people and for those things not given to you despite the inherent birthright that is supposed to guarantee they are yours, is activism. So, when I am writing essays, articles, books, or what have you, the writing and activism are intrinsically tied because for me, they can’t exist without each other and for as long as I am able to do this work, they will never have to.

Keah Brown will stop by the American Writers Museum on September 25 to share more writing insights and discuss her debut essay collection The Pretty One, which Jodi Picoult has called “a game-changer.”