American writing comes in many forms and we like to celebrate them all! Learn more about Comic Strips on today’s blog.

The diversity of America’s writers can only be matched by the number of forms and genres in which they write. Memorable and important writing can come in many ways, lengths, and mediums. A short story can capture the zeitgeist of the moment while a clever advertising tagline can become ingrained in our collective consciousness.

In the past two months, we investigated the mystery genre and jammed out to country music hits. As we continue our journey into new American forms and genres, we’ll learn the history and major players of a unique writing form each month. We’ll also highlight instances of the form in the museum and suggest contemporary pieces for you to explore. We hope you enjoy Many Writers, Many Forms. 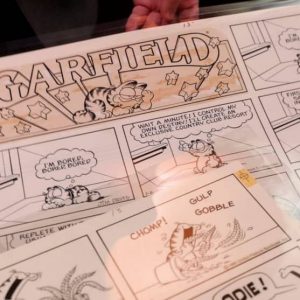 First appearing more than 125 years ago, comic strips have become an essential part of American history and popular culture. Essentially, a comic strip is a sequence of drawings with text in balloons and captions that traditionally appeared in newspapers and magazines. As the name implies, comic strips can be humorous, such as Garfield or Beetle Bailey, but often they can also be dramatic (Rex Morgan, Brenda Starr), tell stories of great adventures (Tarzan, Flash Gordon), or present social commentary (The Boondocks, Pogo).

Rodolphe Töpffer, a Swiss artist, teacher, and painter, is generally considered the father of the modern art of comics and the creator of the multi-panel comic. During his free time, Töpffer would often draw cartoons satirizing 19th-century society to entertain his friends and acquaintances. In 1833, at the urging of his friend Johann Wolfgang von Goethe, he published the first comic Historie de M. Jabot which featured a “middle-class dandy” attempting to become a member of the upper class. The work would be published in comic book form in the United States in 1842 under the title The Adventures of Mr. Obadiah Oldbuck. 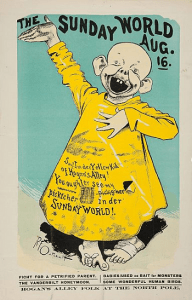 First published in 1895 in New York World, “The Yellow Kid” is often cited as the first true comic strip and one of the first continuous comic characters in the United States. Created by Richard Outcault, the comic told the daily adventures of “The Yellow Kid,” a bald, snaggle-toothed barefoot boy who wore an oversized yellow nightshirt and hung around in Hogan’s Alley with a cast of colorful supporting characters. According to “The Yellow Kid on the Paper Stage,” a site published by the University of Virginia, the strip “presented a turn-of-the-century theater of the city, in which class and racial tensions of the new urban, consumerist environment were acted out by a mischievous group of New York City kids from the wrong side of the tracks.” The success of “The Yellow Kid” lead to comic strips like The Katzenjammer Kids, Happy Hooligan, and Gasoline Alley.

Through the rest of the 20th century, comic strips as a form continued to evolve. In the 1930s, adventure-serial comic strips allowed characters like Flash Gordon and Zorro to migrate between comic strips, pulp magazines, radio, and film with ease. The creation of comic books allowed storytelling in a longer form and lead to the creation of both DC and Marvel Comics, giving us characters like Superman, Spider-Man, and the X-Men.

As comic strips moved into the 21st century, cartoonists began to look for ways to self-publish and they found a home on social media and the internet. Webcomics have allowed the medium to thrive and the rich tradition of comic strip creation to continue in the modern age as the future of print media remains unsure. 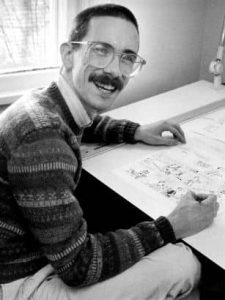 Born on July 5, 1958, in Washington, D.C., Bill Watterson is best known as the creator and author of Calvin and Hobbes. After graduating college in 1980, he was hired to draw political cartoons for the Cincinnati Post. But after working for the newspaper for about a year, he decided to abandon political cartoons and return to his first love: comic strips. For the next five years, Watterson would try selling comic strips to numerous newspapers but received nothing but rejection letters. That was until 1985 when Universal Press Syndicate bought a comic strip about a rambunctious first grader and his stuffed tiger who came to life. Calvin and Hobbes first appeared on November 18, 1985, and became a nationwide success. Watterson was only 27 years old. In 1986, Watterson became the youngest ever recipient of the National Cartoonist Society’s Reuben Award, the industry’s highest honor.

On November 9, 1995, Watterson announced that he would be ending Calvin and Hobbes after ten years of syndication. In a letter to newspaper editors, he said, “This was not a recent or an easy decision, and I leave with some sadness. My interests have shifted, however, and I believe I’ve done what I can do within the constraints of daily deadlines and small panels…Drawing this comic strip has been a privilege and a pleasure, and I thank you for giving me the opportunity.” The final Calvin and Hobbes strip ran on Sunday, December 31, 1995. Journalist Charles Solomon said of the final comic, “In the final strip, Calvin & Hobbes put aside the conflicts and rode their sled into a snowy forest. They left behind a hole in the comics page that no strip has been able to fill.” 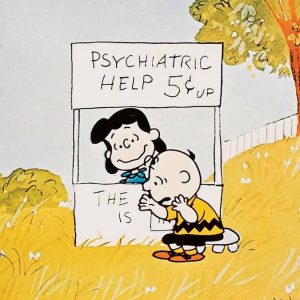 First published as Li’l Folks in 1947 and renamed in 1950, Peanuts is a syndicated comic strip created by Charles M. Schulz. The strip stars Charlie Brown as he deals with life’s daily misfortunes including a kite-eating tree and football that’s never where it should be when he goes to kick it. Though the strip didn’t differ radically from other comics of the time, the strength of Peanuts lies in its humor and the depth of its characters. At the time of Charles Schulz’s death in 2000, Peanuts was running in more than 2,500 newspapers in over 70 countries. The strip has led to numerous TV specials including A Charlie Brown Christmas and It’s the Great Pumpkin, Charlie Brown, a Broadway music entitled You’re a Good Man, Charlie Brown, a 2015 computer-animated film, numerous appearances in the Macy’s Thanksgiving Day Parade, and inclusion in the American Writers Museum’s Surprise Bookshelf exhibit. Over its 50-year-run, Schulz refused to allow any other artists to draw or write Peanuts and the collected body of work, more than 18,000 strips, is considered the longest story ever told by a single person. Learn more about the history and legacy of Peanuts from the Charles M. Schulz Museum. 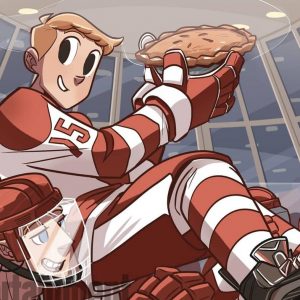 Cupcakes, hockey pucks, and brotherhood—what else could you need? In Ngozi Ukazu’s critically acclaimed webcomic series turned graphic novel Check, Please!, we meet Eric Bittle, a former Georgia junior figure skating champion, vlogger extraordinaire, and amateur pâtissier as he begins his freshmen year at Samwell University. Grappling with learning a new sport, his love for baking, and a crush on his team captain, Eric ultimately forms an unlikely “found family” with his teammates. Ukazu is featured in our My America: Immigrant and Refugee Writers Today exhibit. Her parents immigrated to the United States from Nigeria in the late 80s, eventually settling in Houston, Texas where Ukazu was born. She grew up in a predominantly Hispanic neighborhood and went to school with many first-generation East Asians, so Ukazu has long recognized and embraced the mixing of cultures. Growing up, Ukazu wanted to write for sitcoms like Frasier, 30 Rock, and Parks and Rec, but instead found her writing bug in webcomics. “Making comics is kind of my way of making small little sitcoms and telling those stories and bringing characters together who you might not expect to function well but they have a found family.” You can learn more about Ukazu on our blog here.

Past programs to watch and listen to.

The Peanuts Papers: In November 2019 we hosted a panel discussion with contributors to the Library of America’s special publication The Peanuts Papers: Writers and Cartoonists on Charlie Brown, Snoopy & the Gang, and the meaning of Life. We were joined by Andrew Blauner, editor of the anthology, as well as contributing artists Chris Ware and Ivan Brunetti. Watch the full program on YouTube or listen to a condensed version on the AWM Author Talks podcast here.

Ngozi Ukazu: In addition to being featured in My America, we hosted Ngozi Ukazu in April 2020 for a virtual program, one of the first of many for us! Ukazu shares insights into her writing process, the freedom comics allow in storytelling, and the importance of stories no matter what shape, size, or form they come in. Watch the full program on YouTube or a condensed version on the AWM Author Talks podcast.

Since their creation, comic strips and webcomics remain an essential piece of American culture. To end our exploration of this form, we’d like to share some of our favorite comics and webcomics. Click on the images below to learn more about the works. If physical books are available, you’ll be taken to Bookshop.org, which supports local, independent bookstores. What’s your favorite comic strip? Let us know in the comments below!

One thought on “Many Writers, Many Forms: Comic Strips”