As cities across the country continue to reopen, health officials from around the world are encouraging people to take extra steps to ensure their safety and the safety of others around them. One of those precautions is wearing face masks. When widely used in public settings, masks have been shown to reduce the spread of the COVID-19 virus. But masks don’t only help fight the virus, they can also look super cool and can even reveal, in a very public way, a hint of the person behind the mask.

Let’s take a look at some characters from selected pieces of American writing who put on their masks everyday to entertain, enlighten, and inspire us. We hope you enjoy our offering of these literary mask wearers and some facts about them.

In 1962, in the pages of a comic book slated for cancellation, Stan Lee and Steve Ditko gave birth to one of the most enduring icons in comic book history: Spider-Man. After the success of the Fantastic Four, Marvel was looking to capitalize on the growing demand of teenage comic readers by creating a character that they could identify with; a new kind of superhero—one who was a teenager, but not a sidekick. Spider-Man first appeared in Amazing Fantasy #15 (August 10, 1962) and would prove to be one of Marvel’s highest grossing comics of all time. Since then, Spider-Man has appeared in animated series, children’s books, video games, a Broadway musical, full-length novels, records, and three film franchises including the Marvel Cinematic Universe where he is currently portrayed by Tom Holland.

At the end of the 2018 film Spider-Man: Into the Spider-Verse, Miles Morales (voiced by Shameik Moore) concludes, “For like 2 days, I’ve been the one and only Spider-Man. I think you know the rest…I never thought I’d be able to do any of this stuff, but I can. Anyone can wear the mask. You could wear the mask. If you didn’t know that before, I hope you do now. ‘Cause I’m Spider-Man, and I’m not the only one. Not by a long shot.”

Be like Spider-Man. Wear a mask. Anyone can do it.

One of the most iconic villains in cinema history, Darth Vader is the primary antagonist of the original trilogy and the primary protagonist of the prequel trilogy. Born Anakin Skywalker, Darth Vader was seduced by the power of the dark side of the Force and became a Sith Lord. He loyally served the Emperor, Darth Sidious, for decades and would lead the charge to eradicate the Jedi Order. After a lightsaber battle with his mentor Obi-Wan Kenobi, Anakin is left burnt and dismembered on the banks of a lava flow. Anakin is rebuilt with the signature black armor and face covering he is now known for. He remained in service of the Emperor for decades, leading the charge to eradicate the Jedi Order and crush the Rebel Alliance. The American Film Institute listed Darth Vader as the third greatest villain in cinema history on 100 Years…100 Heroes and Villains, behind Hannibal Lecter (also masked) and Norman Bates.

If he were with us today, Darth Vader would say, “I find your lack of a mask disturbing.” 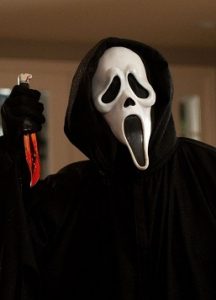 While high school student Casey Becker (portrayed by Drew Barrymore) is preparing for a movie night with her boyfriend, she receives a strange call from an unknown number. The caller taunts her with horror clichés and trivia questions, before murdering her boyfriend when she answers a question wrong. Casey makes a run for her life, but she isn’t fast enough. Ghostface catches her, murders her, and strings her up to a large tree for her parents to find.

Created by screenwriter and author Kevin Williamson, Ghostface is a fictional persona taken on by a variety of serial killers throughout the Scream franchise. Ranging from revenge to fame to peer pressure, each character who takes on the mantle of Ghostface has a different motive for their crimes. In his book Going to Pieces: The Rise and Fall of the Slasher Film, author Adam Rockoff discusses the terrifying design of the mask, saying the face is “twisted in an exaggerated, almost mocking grin, as if reflecting the look of terror and surprise on his victims’ faces.” Since his first appearance in 1996, Ghostface has had almost continuous cultural impact making appearances in various television shows and parody films while remaining one of the most popular Halloween costumes each year.

From The Masque of Red Death by Edgar Allan Poe

First published in 1942, The Masque of the Red Death tells the story of Prince Prospero’s attempt to avoid a dangerous plague known as the Red Death. Along with 1,000 other nobles, Prospero hides himself away in his castle to wait out the end of the plague in luxury and safety. One night, Prospero holds a masquerade ball to entertain his guests. When the clock strikes midnight, the guests notice a figure in a dark, blood-splattered robe with the face of a corpse. This masked figure is meant to represent the Red Death, a fictitious disease, which is described as causing “sharp pain, sudden dizziness, and then profuse bleeding at the pores” leading to death within a half hour. Demanding to know who this mysterious stranger is, the party-goers forcibly remove the mask and cloak, only to discover that there is nothing underneath. Only then do they realize the costume is empty, as the disease spreads from person-to-person, infecting everyone in the cast. As the final line of the story says, “Darkness and Decay and the Red Death held illimitable dominion over all.”

One way to make sure coronavirus doesn’t hold “illimitable dominion” over us is to wear a mask. It’s that simple.

One of the earliest examples of a masked avenger with a double identity, Zorro is a dashing vigilante who defends the commoners and indigenous people of California against tyrannical politicians and other nefarious persons. Zorro is the secret identity of Don Diego de la Vega, the son of a wealthy landowner who trained in sword fighting while at college. Zorro made his debut in Johnston McCully’s novel The Curse of Capistrano which was serialized in five parts in the pulp magazine All-Story Weekly. The success of the original novel would lead to a film adaptation (The Mask of Zorro), sixty short stories and novels, and a Disney-produced Zorro television series. Zorro would go on to influence decades of writers and is considered the inspiration for American comic books and many modern superheroes.

While Zorro’s mask only covers his eyes, make sure your mask covers your mouth AND nose.

Who’s your favorite mask-wearing character from American writing? Did we miss any? Let us know in the comments below!

Matthew Masino is the Social Media Coordinator for the AWM. He is also a content creator, writer, and theatre director based in Chicago, Illinois. He graduated with a B.F.A. in Theatre Directing from Columbia College Chicago in 2019. As a theatre artist, Matthew has worked with the International Voices Project, the Chicago Fringe Festival, and BYOT Productions. You can learn more by visiting his website www.matthewmasino.com.