Each week, the My America blog series will introduce you to one of the writers featured in our newest exhibit My America: Immigrant and Refugee Writers Today, now open. The exhibit is designed to elicit thoughtful dialogue on a wide array of issues with contemporary immigrant and refugee writers delving into questions about writing influences, being multilingual, community, family, duality, otherness and what it means to be American. Check back every Wednesday to learn more about these writers and their thoughts on these themes, as we highlight select quotes from the exhibit as well as reading recommendations. Today, get to know Akwaeke Emezi, born and raised in Nigeria and the author of Freshwater and Pet, which was a 2019 National Book Award finalist for Young People’s Literature.

Akwaeke Emezi has been trying to figure out if they can grow a cola nut tree in the United States. In their native country of Nigeria, the cola nut tree is prevalent and of great importance in Igbo culture where it is said, “He who brings cola brings life.” The cola is a nut that breaks off into loaves and at gatherings there is a ceremony where the nut is opened and prayed over. “It opens up the spaces for dialogue in the home, for dialogue in the community, and it has immense spiritual significance. It’s hard to get it in America because it dries out really easily, so unless it’s airtight it’ll just shrivel. So I’ve been curious to know if I can grow it here and get an unending supply that way.”

While they might not have found success with cola nut trees yet, Emezi has certainly carved out a successful writing career thus far. Their writing often deals with “the idea of a plural individual and a singular collective,” as they put it, or the notion that there are multiple realities that are valid and worthy of exploring. For Emezi, it is important “because so much of [the violence] that’s happening in the world now is because of the insistence on a singular dominant reality…That is a lie of singularity when the stories are multiple.”

This is also a major theme of our exhibit My America: Immigrant and Refugee Writers Today, in which Emezi is featured and discusses being constantly “othered” their whole life. First, Emezi’s mother is from Malaysia, so growing up in Nigeria they got special treatment due to their mother being foreign, or as Emezi puts it, due to their “proximity to whiteness.” Then when they would visit their family in Malaysia, no one would believe them that their mother was Malaysian because they “just look African.” And finally, when they came to the U.S. at the age of 16 as a college freshman, they were “just black,” but “a different kind of black in the college environment because you’re African, and you’re 16, and you’re precocious.” The end result of all this was a feeling of placelessness. “I spent so long in that placeless space trying to figure out where I could fit, where I could belong. What eventually happened was that I let go of the idea of belonging anywhere at all in the first place.”

The following are excerpts from our newest exhibit My America: Immigrant and Refugee Writers, now open. You can read more about Emezi and hear them speak on these topics in more depth by exploring My America. Plan your visit today! 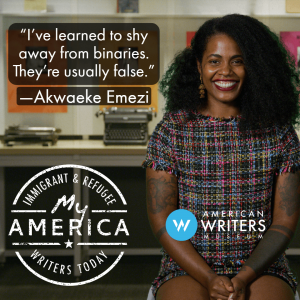 “One of my favorite writers is Helen Oyeyemi…The way that she thinks, the way that she tells stories, I had just never seen storytelling like that before, and from a Nigerian writer, which in turn kind of gave me permission to be like, ‘Oh, I can be a little weird. I can write things that are a little more experimental. I can really push those boundaries of what storytelling can be because I have this example of somebody who is from where I’m from and who is doing this as well.'”

On the Effects of Colonialism

“What was real before stops being real after. Things that people have believed for generations and centuries, they are told it’s not real because someone said so. And that is enforced. And in the cases where it cannot be enforced, it is then called evil. So I wanted to make work that reclaimed that a bit, that said, ‘Well, if the only reason you are calling this superstition, and the only reason you are calling these realities magical realism—or you’re calling them backwards, or ignorant, or whatever the word is—if the only reason is because a bunch of white people showed up and told you so, that’s not a particularly good reason.'”

“People who are interested in authenticity don’t want you to shift. You are supposed to fit into this category, and that is what makes sense. And for me this is why liminal spaces are so important because this is a valid space. The shift itself, the flux itself is a space. You can belong in a flux. You can be based in a flux. And you don’t have to be firm in one place or another. The flux takes you from place to place.”

“I genuinely have absolutely no idea what it means to be American…I know I have an American passport, I live in America. I tend to focus on those verbs rather than the verb ‘to be’…there are so many spaces that these verbs can carry you to that are always so much more complicated for me than just being.”

The Death of Vivek Oji