Each week, the My America blog series introduces you to one of the writers featured in our newest exhibit My America: Immigrant and Refugee Writers Today. The exhibit is designed to elicit thoughtful dialogue on a wide array of issues with contemporary immigrant and refugee writers delving into questions about writing influences, being multilingual, community, family, duality, otherness and what it means to be American. Check back every week to learn more about these writers and their thoughts on these themes, as we highlight select quotes from the exhibit as well as reading recommendations. Today, we’re pleased to introduce you to R.O. Kwon, who moved to the U.S. from South Korea and the age of three and whose debut novel The Incendiaries is a national bestseller.

R.O. Kwon originally planned to be a Christian pastor. “I wanted to devote my life to God. And then I lost that faith when I was 17, and it was devastating in a lot of ways…It’s the pivotal loss of my life.” This seminal moment also provided the impetus to write her critically-acclaimed debut novel The Incendiaries, about a woman who gets involved with an extremist Christian group that turns out to be a cult with ties to North Korea and they bomb abortion and healthcare clinics in the name of faith. Kwon says she “wanted to write a book that could perhaps serve as a kind of imaginative bridge between different parts of the faith spectrum,” between those who understand “how wonderful it was to believe” and those who have no idea.

The result was The Incendiaries, which landed on numerous “Best Books of 2018” lists, as well as the bestseller lists. But writing isn’t easy for Kwon, which makes her appreciate the work even more. “It’s the hardest thing I do in that it requires the full extent of my abilities. It requires every ounce of my intelligence when the writing’s going well. But I think that’s part of what I love about it, that it asks so much from me, that it absorbs me so fully.”

Born in South Korea, Kwon moved to the United States with her family when she was three. They settled in “L.A. in a small town that was something like 80% Asian, my public high school was also 80% Asian, a variety of Asians.” So for most of her early childhood Kwon grew up thinking “we were everywhere…there’s just a lot of Asians everywhere.” It wasn’t until she got older and became more aware of the world that Kwon realized just how lucky she was to grow up in a predominantly Asian community and thus not experience racism as much. “In some ways that was a very strange and fortunate way to grow up because I didn’t experience that sort of formative trauma that I know a lot of people experience, especially if they look different than the majority wherever it is they’re growing up.”

You can see Kwon expand on these thoughts and more by exploring our special exhibit My America: Immigrants and Refugees Today. The following are excerpts taken from our interview with Kwon for the multimedia experience of My America. Read the snippets below, then visit the exhibit in person to watch and hear Kwon talk about these topics in more depth. Plan your visit today!

On What It Means to Be American

“Every time I open the news, every time I open my Twitter feed, I feel increasingly troubled by and upset about what it means to be an American and the great harm that is being done in our country’s name. I love it here, you know. I’ve lived in a number of other countries, but I was always homesick for America…I very much wish though, that our collective sense of home could be far more inclusive, and far more open than it is now.” 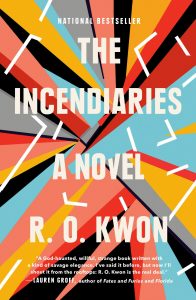 On Her Love of Writing

“Writing is a way of being in conversation with the writers I love so much, the living and the dead, and continuing that conversation. I just love writing. I love it so much.”

On Family and Trauma

“There’s a large extent to which my family doesn’t want to talk about whatever it is that caused us all to move. I’ve tried asking questions, but they are not really interested in talking about it. And I think that often happens with a lot of immigrant families, or at least the immigrant families of people I know. People don’t necessarily want to talk about the trauma. They don’t want to talk about the pain that they’ve experienced and, I think, their hope is that perhaps their children won’t be as affected by that trauma and that pain. I think it’s an act of love that they’re hiding from me the reasons that they moved.”

On Representation in Literature 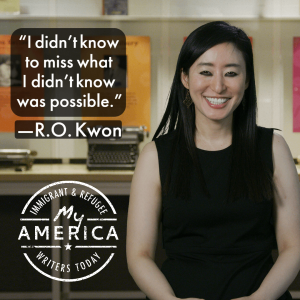 “I didn’t start reading Korean American writers until after college, and the first ones I read were Alexander Chee, Min Jin Lee, Susan Choi, Chang-Rae Lee, and at some point I realized the fact that I’d waited, that it took me that long to encounter writing by Korean American people means that I, in my entire life, had been infatuated by an art form [English literature] in which I did not and could not have existed…In retrospect I feel such sorrow about that. It didn’t bother me at the time as a kid because I didn’t know what I was missing. I didn’t know to miss what I didn’t know was possible. So it means so much to me that there are more and more writers who are Korean American, who are Asian American. It means so much to me that more and more kids in high school and college don’t have to grow up the way I did.”