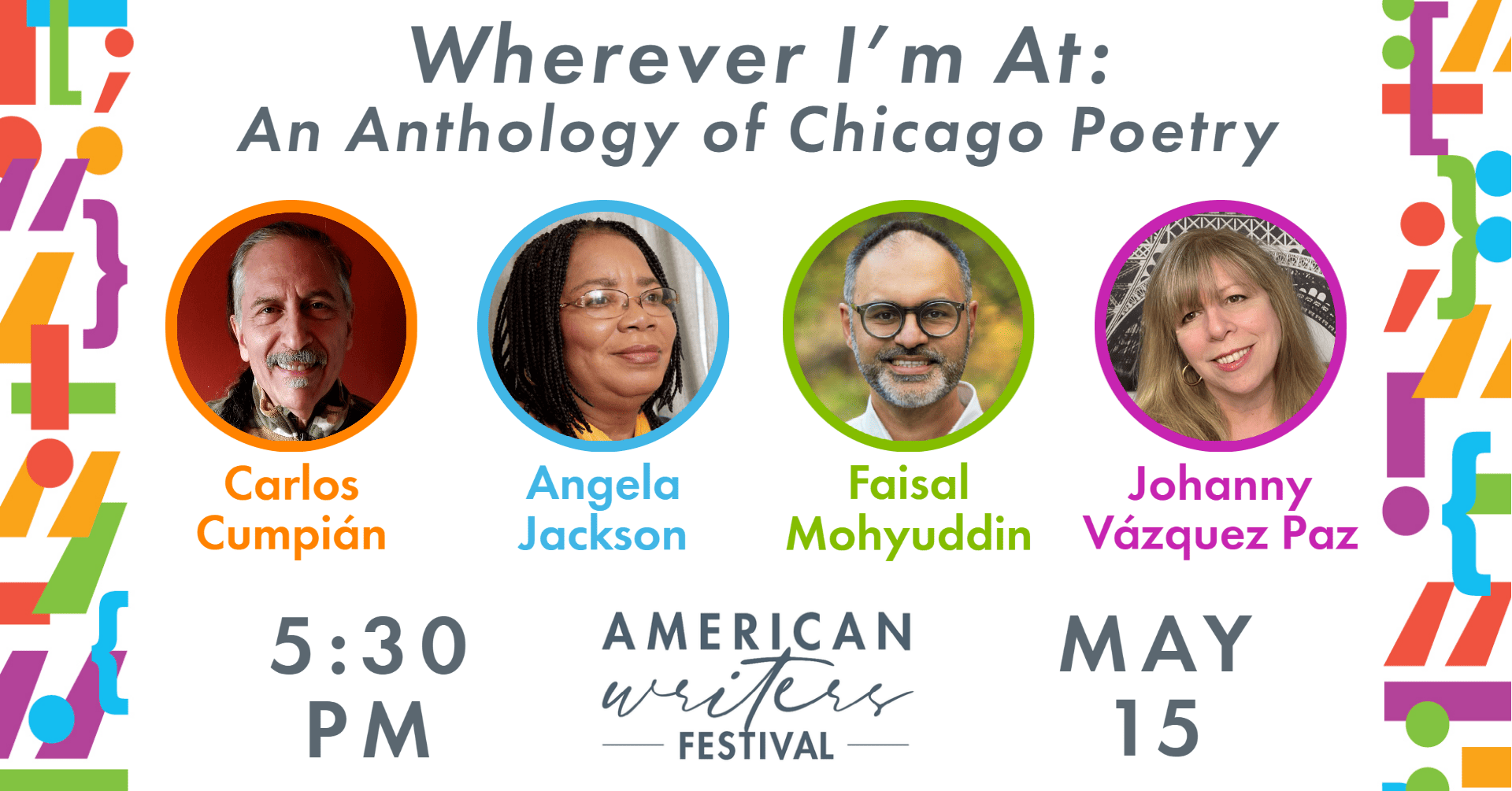 Poets Angela Jackson, Johanny Vázquez Paz, and Faisal Mohyuddin read from and discuss their contributions to the forthcoming anthology Wherever I’m At: An Anthology of Chicago Poetry. This conversation will be moderated by poet Carlos Cumpián.

About Wherever I’m At:

Taken together, the poems and artwork tell a story of Chicago not found in the guidebooks. Through anthems and haikus, landscapes and urban installments, odes and sonnets, stills and collages, Chicago comes at us in all forms, and with dramatic shades of color and light. Reading this anthology will erase any doubt that Chicago belongs in the top tier of literary cities, and in the top tier of cities, period.

Angela Jackson, the fifth Illinois Poet Laureate, is an award-winning poet, novelist, and playwright who has published three chapbooks and four volumes of poetry. Born in Greenville, Mississippi and raised on Chicago’s Southside, she was educated at Northwestern University and the University of Chicago.

Johanny Vázquez Paz is the winner of the 2018 Paz Prize for Poetry given by the National Poetry Series in partnership with the Miami Book Fair. The winning book, I Offer My Heart as a Target / Ofrezco mi corazón como una diana, was chosen by Rigoberto González and published by Akashic Books in 2019. Among her other publications are Sagrada familia (winner of the International Latino Book Award, 2015), Querido voyeur (Ediciones Torremozas, Spain, 2012), and Streetwise Poems / Poemas callejeros (Mayapple Press, Michigan, 2007). She also co-edited the anthology Between the Heart and the Land / Entre el corazón y la tierra: Latina Poets in the Midwest (MARCH/Abrazo Press, Chicago, 2001).

Faisal Mohyuddin is a writer, educator, and visual artist. The author of The Displaced Children of Displaced Children (Eyewear Publishing, 2018) and the chapbook The Riddle of Longing (Backbone Press, 2017), his work has received an Illinois Arts Council Literary Award, a Gwendolyn Brooks Poetry Award, Prairie Schooner’s Edward Stanley Award, and acclaim from the Poetry Book Society, the Forward Arts Foundation, and the Association of Asian American Studies. He teaches at Highland Park High School in suburban Chicago and at the School of Professional Studies at Northwestern University, and he serves as a master practitioner for Narrative 4.

Carlos Cumpián, a Chicagoan originally from Texas, is the author of five poetry collections: Coyote Sun, Latino Rainbow, Armadillo Charm, 14 Abriles, and his newest Human Cicada (Prickly Pear Publishing, 2022). He has been included in more than thirty poetry anthologies, including the Norton Anthology Telling Stories. His literacy essay, “Learned to Read at My Momma’s Knee,” appears in With a Book in Their Hands: Chicano Readerships Across the Centuries. Cumpián currently is working on his memoir, Accidental Rebel: 1968-1976, and recording his many paranormal accounts.