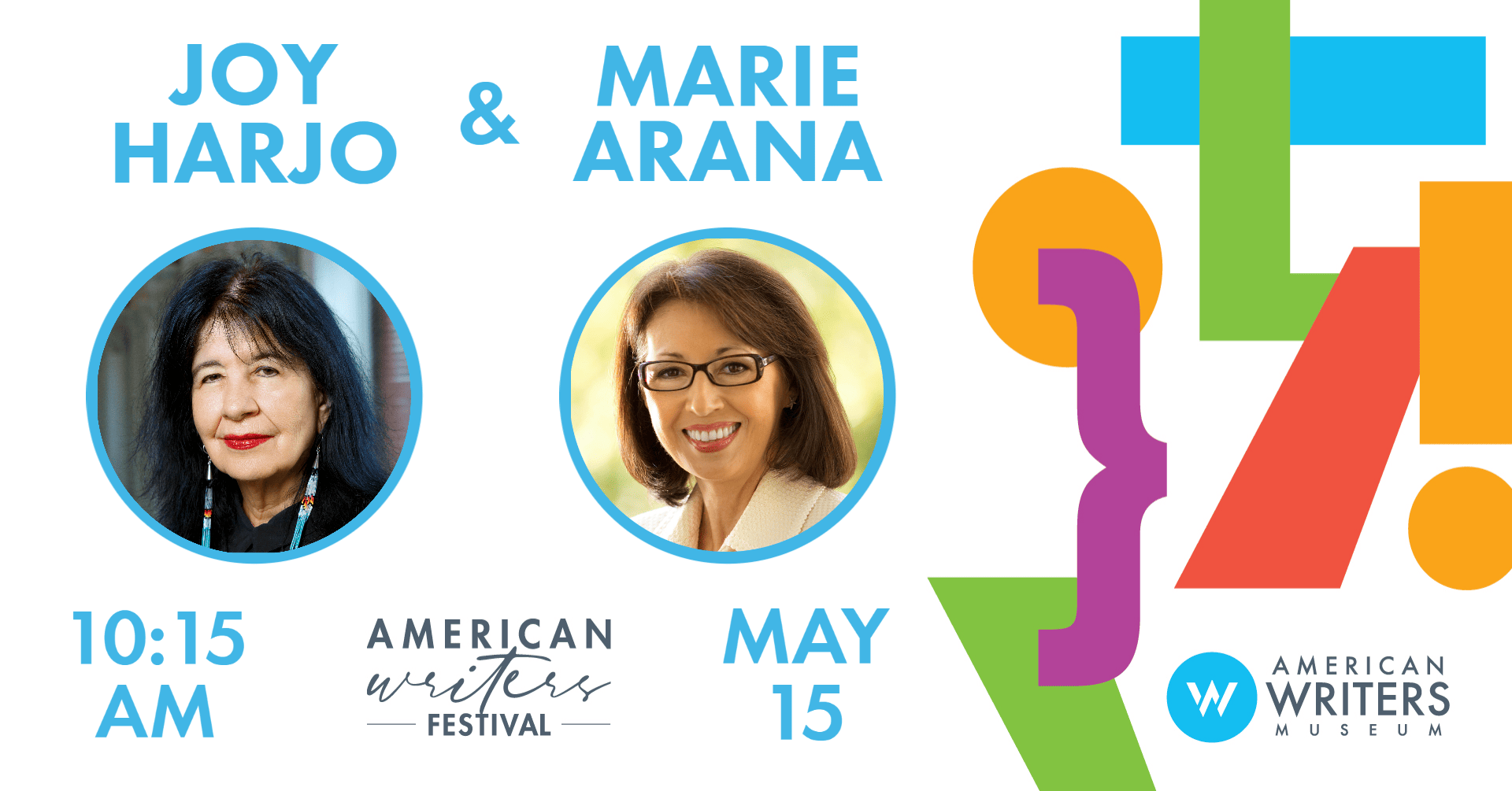 Kick off the American Writers Festival with our keynote address from Joy Harjo and Marie Arana!

In 2019, Joy Harjo was appointed the 23rd United States Poet Laureate, the first Native American to hold the position and only the second person to serve three terms in the role. Harjo’s nine books of poetry include An American Sunrise, Conflict Resolution for Holy Beings, How We Became Human: New and Selected Poems, and She Had Some Horses. She is also the author of two memoirs, Crazy Brave and Poet Warrior, which invites us to travel along the heartaches, losses, and humble realizations of her “poet-warrior” road. She has edited several anthologies of Native American writing including When the Light of the World was Subdued, Our Songs Came Through — A Norton Anthology of Native Nations Poetry, and Living Nations, Living Words, the companion anthology to her signature poet laureate project. Her many writing awards include the 2019 Jackson Prize from the Poetry Society of America, the Ruth Lilly Prize from the Poetry Foundation, the 2015 Wallace Stevens Award from the Academy of American Poets, and the William Carlos Williams Award from the Poetry Society of America. She is a chancellor of the Academy of American Poets, Board of Directors Chair of the Native Arts.

Marie Arana is a Peruvian-American author of nonfiction and fiction as well as the inaugural Literary Director of the Library of Congress. She is the recipient of a 2020 literary award from the American Academy of Arts & Letters. Among her recent positions are: Director of the National Book Festival, the John W. Kluge Center’s Chair of the Cultures of the Countries of the South, and Writer at Large for the Washington Post. For many years, she was editor-in-chief of the Washington Post’s book review section, Book World. Marie has also written for the New York Times, the National Geographic, Time Magazine, the International Herald Tribune, Spain’s El País, Colombia’s El Tiempo, and Peru’s El Comercio, among many other publications. Her sweeping history of Latin America, Silver, Sword, and Stone, was named Best Nonfiction Book of 2019 by the American Library Association, and was shortlisted for the 2020 Andrew Carnegie Medal of Excellence. Her biography of Simón Bolívar won the 2014 Los Angeles Times Book Prize. Marie’s memoir, American Chica, was a finalist for the 2001 National Book Award. She has also published two prizewinning novels, Cellophane and Lima Nights.