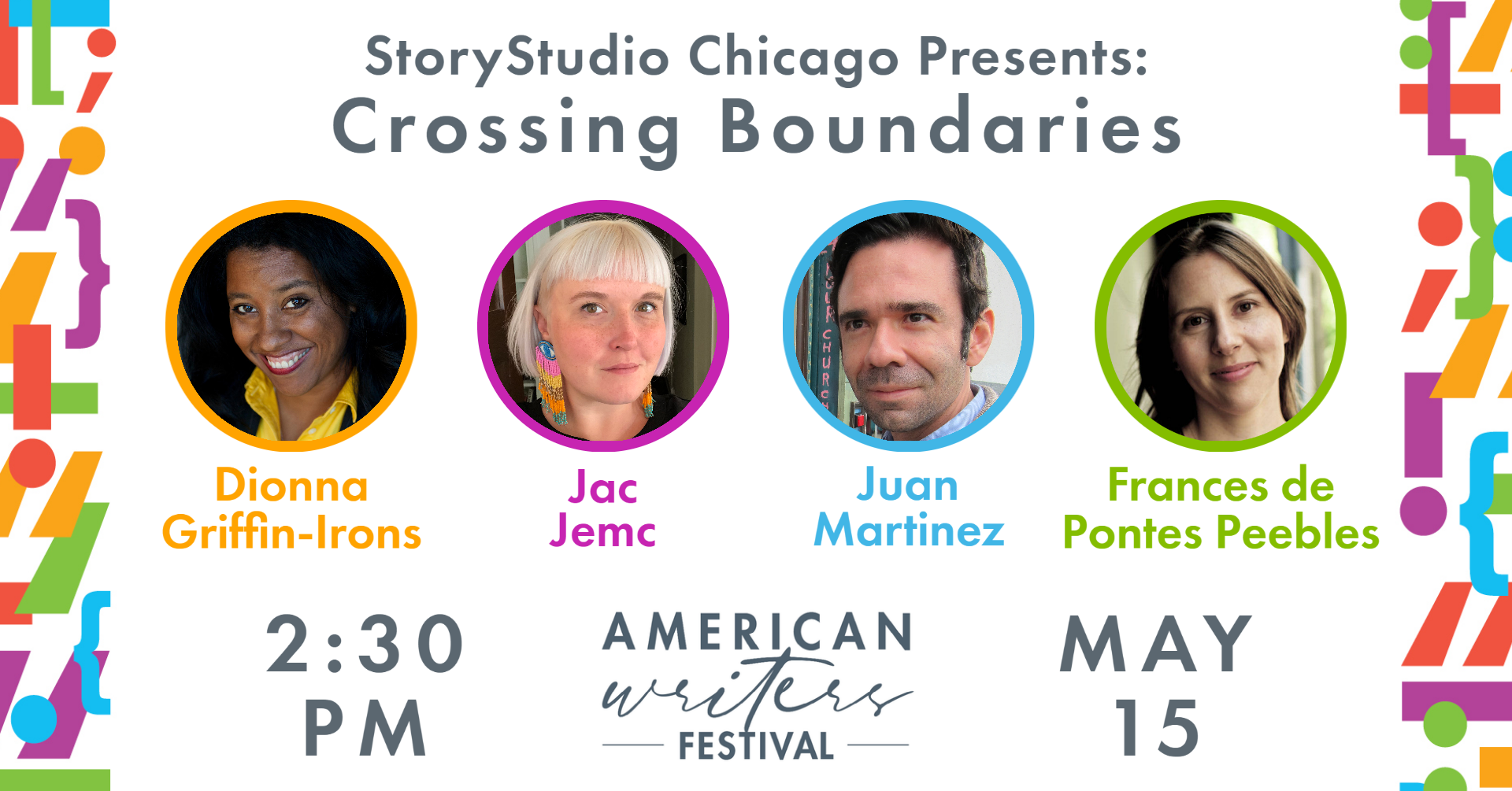 Presented by StoryStudio Chicago, this panel discussion will cover the process of writing from multiple identities and genres, as well as the cultivation of voices of students who also write from multiple identities, often marginalized ones. Featuring Dionna Griffin-Irons, Jac Jemc, and Juan Martinez. Moderated by Frances de Pontes Peebles.

Dionna Griffin-Irons is a writer, producer and Director of Talent Diversity and Development for The Second City U.S. and Canada. A Second City Detroit alumnus with 18+ years of experience as a performer, producer and facilitator, Dionna has taught 200+ workshops at colleges, corporate boardrooms, women’s shelters and worked with the United States Embassy in Norway and Latvia introducing improv as a tool for social change. Griffin-Irons’s outreach work has appeared in Diversity Journal publication, on NPR, ABC, NBC and numerous academic posts including her 2015 TEDx Talk at the University of Chicago. Producer credits include 20+ “Urban Twist” revues, Second City Southside, R.E.A.C.H. (Risky, Eclectic Artists Comedy Hour), Second City Black History Month Show, and Second City & NBC Break Out Comedy Festival. Her 2014 published work can be found in Rowan/Littlefield’s anthology Women, Writing and Prison. She is currently writing a memoir on the intersection of comedy, diversity and women in prison.

Jac Jemc is the author of the novels Total Work of Art; My Only Wife, winner of the Paula Anderson Book Award; The Grip of It; and the short-story collections A Different Bed Every Time and False Bingo, winner of the Chicago Review of Books Award for Fiction and finalist for the Story Prize. Jemc currently teaches creative writing at UC–San Diego.

Frances de Pontes Peebles is the author of the novels The Seamstress and The Air You Breathe. She is a Creative Writing Fellow in Literature for 2020 from The National Endowment for the Arts. Her books have been translated into ten languages and won the Elle Grand Prix for fiction, the Friends of American Writers Award, and the James Michener-Copernicus Society of America Fellowship. Her second novel, The Air You Breathe, was a Book of the Month Club pick. Born in Pernambuco, Brazil, she is a graduate of the Iowa Writers’ Workshop. She has received a Fulbright Grant, Brazil’s Sacatar Foundation Fellowship, and was a Teaching Fellow at the Bread Loaf Writers’ Conference. Her short stories and essays have appeared in O. Henry Prize Stories, Zoetrope: All-Story, Missouri Review, Indiana Review, Catapult, and Real Simple. Her novel, The Seamstress, was adapted for film and mini-series on Brazil’s Globo Network. She is proud to serve on the Board of the Young Center for Immigrant Children’s Rights. In Spring 2019, she served as Visiting Associate Professor of Fiction at the Iowa Writers’ Workshop.