Our special exhibit, Frederick Douglass: Agitator, closes June 9, as we prepare to replace it with Tools of the Trade, opening June 22. So if you haven’t explored this exhibit yet, or want to come back again, then you have one more month to do so! We put together some reasons why Frederick Douglass: Agitator should be on your list of things to do in Chicago this month before it’s gone.

In 1893, Frederick Douglass attended the World’s Columbian Exposition right here in Chicago representing Haiti. Intended to highlight the achievements of nations across the world, with a particular emphasis on American achievements, the organizers of the World’s Fair did not give black Americans a voice or platform to show off their achievements. To these excluded Americans, the nickname of the fairgrounds, “The White City,” had an entirely different meaning.

Always the agitator, Douglass sought to protest this mistreatment by combining forces with Ida B. Wells, who wrote The Reason Why pamphlet, which detailed both the achievements of blacks since emancipation and the discrimination and dangers they still faced on a daily basis. Wells wrote the majority of the pamphlet, with contributions from Irvine Garland Penn and Ferdinand Lee Barnett, as well as a fiery introduction from Douglass himself. This introduction was one of Douglass’s last pieces of published writing and included the famous line:

“Let the truth be told, let the light be turned on ignorance and prejudice, let lawless violence and murder be exposed.”

Wells and company distributed the pamphlet from the Haitian Pavilion, ensuring their words would reach festival-goers. A facsimile of Douglass’s copy of The Reason Why is on display in our exhibit, and copies of the pamphlet can be found in our gift shop. 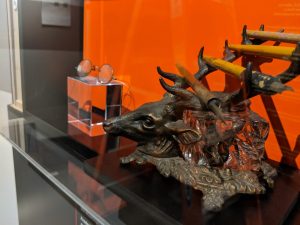 Also on display are personal items that Douglass used, including his reading glasses, pens, and inkwell. This is your chance to see up close the very glasses Douglass rested upon his nose to see things up close! And that impressive inkwell? You best believe the “self-made man” went all out on that after teaching himself how to read and write. “Once you learn to read, you will be forever free,” he once said. And once you learn to write you might as well have a badass stag inkwell to shove in the face of those who banned you from learning.

Take your photo with Frederick Douglass 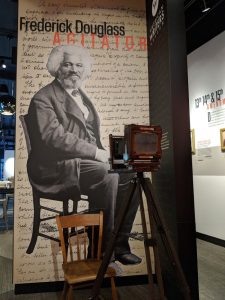 Recognizing the power of photographs to influence public perception, Douglass became the most-photographed American of the 19th century. He saw how exaggerated caricatures of African-Americans reinforced the myth of white supremacy, so he sought to counteract that by always appearing elegantly dressed, not smiling, and staring directly into the camera with that classic Frederick Douglass stone cold stare of confidence, intelligence and unwavering determination.

Douglass meticulously controlled his image, and as a nod to this we created a place for you take a photo with the man himself. Control your own image and show your friends that you mean business by sharing a photo of yourself with America’s foremost agitator. 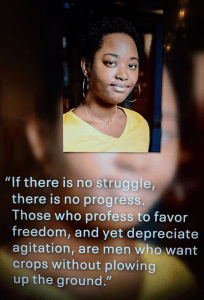 We teamed up with Young Chicago Authors to bring Douglass’s words to life, recording young poets reading some of his most well-known and powerful quotes. These young people, including National Youth Poet Laureate Patricia Frazier, speak Douglass’s words with eloquence and passion, demonstrating how his work remains all-too relevant today. In many ways, we are fighting the same battles for equality that Douglass fought, and coming up against the same backlash he received. Douglass’s words help to bolster our belief in the power of writing to enact change, but they also remind us that change takes a long time to happen and it’s the struggle that is vital.

Get inspired to agitate

As we mentioned, we are still fighting many of the same battles Douglass fought in his time, and this exhibit aims to honor the breadth of Douglass’s activism. You know him as a fierce abolitionist, but he also lent his voice to other social equality causes such as women’s rights, fair voting laws, equal education opportunities and many more. Today, women still fight for equal rights, in particular for bodily autonomy and workforce equality. Today, elections are being stolen and voters — particularly people of color — continue to be suppressed. Today, public schools are underfunded and closing, making education wildly inaccessible and those who can “afford” secondary education are saddled with thousands of dollars of debt. And so on.

Douglass’s words serve as inspiration and provide the foundation for this next generation of activists and now more than ever we need to heed his words and continue to “Agitate! Agitate! Agitate!”