Read up on Kate Bishop before watching the new Disney+ series. 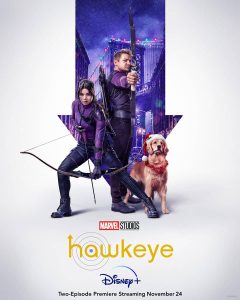 This week, Marvel Studios premiered the first two episodes of Hawkeye on Disney+ continuing the story of the bow and arrow wielding Avenger, portrayed by Jeremy Renner. The series, created by Jonathan Igla, introduces Kate Bishop (Hailee Steinfeld) who is set to take over the mantle of Hawkeye in the Marvel Cinematic Universe.

But who exactly is Kate Bishop? To figure out the answer, we’ll have to travel back in time, all the way to the year 2005. As the country was suffering from the devastating effects of Hurricane Katrina and discovering the newly available YouTube video sharing site, Marvel comics was busy introducing its readers to a brand-new superhero team: the Young Avengers, created by Allan Heinberg and Jim Cheung.

Who is Kate Bishop?

Katherine “Kate” Elizabeth Bishop grew up the youngest daughter of a rich Manhattanite publishing magnate. She adored her father and did her best to win his approval on her visits home from boarding school. One night, Kate witnessed her father beating up a man in his office. Another night, she followed him to a meeting with El Matador, a low-level super villain, but was caught and held for ransom. It was only due to the heroic activities of the Avengers, particularly Hawkeye, that she was rescued. 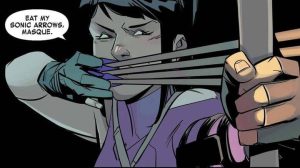 Years later, Kate was brutally attacked while jogging in Central Park. Traumatized by her experience, she began learning archery, swordplay, and martial arts so that she could defend herself in the future. During the wedding of her older sister, Susan, Kate assisted the newly formed superhero team, the Young Avengers, in defeating a group of robbers holding the wedding party hostage.

After the events of the wedding, Kate tracked down the Young Avengers at their headquarters and forced her way onto the team. Though the team of adolescent superheroes clashed with the more experienced Avengers, the Young Avengers went on to assist in the defeats of Kang the Conqueror and Doctor Doom. Using her skills as a highly trained archer, fencer, and swordsman, Kate Bishop is able to wield Clint Barton’s box and arrow.

On November 23, Kate Bishop made her grand debut in the Marvel Cinematic Universe in the limited series Hawkeye. The series stars Hailee Steinfeld as Bishop and Jeremy Renner returns to play the original arrow-shooting hero, Clint Barton/Hawkeye. The show also features performances from Florence Pugh, Vera Farmiga, Linda Cardellini, and Jolt as Lucky the Pizza Dog. Check out the trailer for the series below.

Matthew Masino is the Social Media Coordinator for the AWM. He is also a content creator, writer, and theatre director based in Chicago, Illinois. He graduated with a B.F.A. in Theatre Directing from Columbia College Chicago in 2019. As a theatre artist, Matthew has worked with the International Voices Project, the Chicago Fringe Festival, and BYOT Productions. You can learn more by visiting his website www.matthewmasino.com.