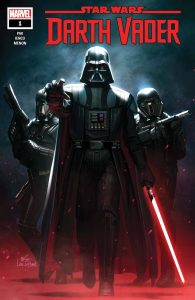 This week, we’re talking about a color you won’t find on any color wheel: Black. It’s not a primary, secondary, or tertiary color; in fact, it’s not even considered a color. According to hisour.com, “Black can be defined as the visual impression experienced when no visible light reaches the eye…Black is the absorption of all colors of light, or an exhaustive combination of multiple colors of pigment.” We can discover black in all other colors, as it’s required for depth and variation of hue in the other parts of the rainbow. Black has also had an important influence on art, literature, and culture. The world’s first printed book, The Gutenberg Bible, used black text on white paper since the contrast between the two colors made it the easiest to read. In 1927, Coco Chanel created a line of simple but elegant black suits and dresses, giving us the wardrobe staple we know today as the Little Black Dress. In theatre and cinema, villains and criminals often appear wearing black. Just think of the memorable costumes of Darth Vader, The Wicked Witch of the West, and any number of antagonists in classic country western films. Psychologically, black can make us more confident and increase our sense of potential.

“As I sat there, unable to decide, the figs began to wrinkle and go black, and, one by one, they plopped to the ground at my feet.”

“We still tiptoe around having an honest discussion about what it really means to exist while Black in this country. All lives can’t matter if Black lives don’t matter.”

“Hades raised an eyebrow. When he sat forward in his throne, shadowy faces appeared in the folds of his black robes, faces of torment, as if the garment was stitched of trapped souls from the Fields of Punishment, trying to get out.”

“The Black Panther lives. And when he fights for the fate of Wakanda, I will be right beside him.”

“As you grow older, you’ll see white men cheat black men every day of your life, but let me tell you something and don’t you forget it—whenever a white man does that to a black man, no matter who he is, how rich he is, or how fine a family he comes from, that white man is trash.”

―Harper Lee, To Kill a Mockingbird