I live across the street from the former home of early-twentieth century author, poet, and artist Evaleen Stein. When Evaleen and her mother built their home in Lafayette, Indiana, in 1910, complete with a lush, well-planned side garden, they named their sprightly cottage Little House of Dreams. Evaleen painted a verse above the fireplace where it remains today:

Peace and Joy come sit beside

This our hearth and here abide

Bless our little house of dreams. 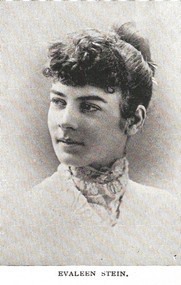 I see Evaleen’s Little House of Dreams from my circa 1900 home where my writing studio is in the former sleeping porch that holds court over my own garden. I like to think Evaleen and I are kindred writers, a century apart in time, sharing the same inspirational neighborhood ether.

There is no historical marker telling passersby that a great woman of letters once lived in the Little House of Dreams or, that the home was christened with a name full of hope and promise. As is all too common throughout history, many women authors have not been given recognition. Evaleen was born in Lafayette in 1863 and, sixty years later, died in her home as a prolific, popular writer. The Little House of Dreams was her muse and a haven that nurtured her art.

Evaleen was thin with brown curly hair. Gentle and retiring, she focused on her work and was rarely seen in public, yet she did attend meetings of a literary group called the Parlor Club. She treasured simplicity and nature and wove both into her writing.

Evaleen attended the Art Institute of Chicago where she honed her artistic gifts to create decorative illuminations for manuscripts and mottoes. Her work was displayed and won prizes in New York, New Orleans, and Chicago galleries. She received an honorable mention from the Panama-Pacific International Exposition in San Francisco for her illumination of the Twenty-Third Psalm.

Evaleen’s writing career began when her poems were published in the Indianapolis Journal and St. Nicholas, a children’s magazine published for about seventy years. In 1897, Evaleen published her first collection of poetry, One Way to the Woods, embracing the theme that nature communicates to humankind. A verse reads, “The earth confides, as from a million lips, its gladness and distress …”

Evaleen published several hundred poems, mostly about flora and fauna, and translated poems from Japan and Italy. Her epic poems saluted the Battle of Tippecanoe’s Centennial in 1911 and Indiana’s Statehood Centennial in 1916. Yet, Evaleen became best known for her twelve children’s books.

One of Evaleen’s good friends was world-renowned book designer Bruce Rogers who was also from Lafayette. In 1903, Evaleen painted images to illustrate the legend of St. Francis’ Sermon to the Birds. From Boston where he designed books for Riverside Press, a subsidiary of Houghton Mifflin and Co., Rogers bound her pages into a parchment book producing only one copy. The Indianapolis News wrote of the singular tome: “Not more than once in a life will a person do anything so lovely.”

Evaleen had encouraged Rogers when he was an up-and-coming book designer, and he remained her devoted friend. In 1906, he helped her connect with a Boston publisher to create her juvenile novel Gabriel and the Hour Book, a story full of medieval lore and probably her most popular book among children, published in ten editions.

In 1907 her friends James Whitcomb Riley, George Ade, Meredith Nicholson, and Charles Major hosted an Author’s Reading at Purdue University as a benefit that raised $1,000 to enable Evaleen to travel to Europe. Each author read a selection from his work in tribute to Evaleen.

Evaleen used the award to take her mother on a year-long European tour where she collected material for her popular “Little Cousin” series of books. Each work acquainted the child reader with a “little cousin” from a different country.

Evaleen died in 1923, and for years after she was remembered on her birthday by the Teachers’ Federation of Lafayette with school programs featuring children singing her poems set to music. Today, there are websites that feature Evaleen’s poetry for children complete with coloring pages and craft ideas like DLTK’s Growing Together and The Baldwin Project , which “Brings Yesterday’s Classics to Today’s Children.”

At her request, Evaleen’s funeral was simple, like her life. It was held in the Little House of Dreams where, according to a newspaper article, the living room held her “work table, with its now empty chair… A book case has many books by Indiana authors, most of them autographed …”

Today, I walk my dog along the bumpy brick pathway in front of the Little House of Dreams now painted the color of autumn wheat. The bricks are made uneven by the force of protruding roots from a crabapple tree, presumably planted by Evaleen. Sadly, a bedraggled wood privacy fence now encircles the side yard where Evaleen’s larkspur and snapdragons once grew. As I pass by, I think of the poem above the fireplace and imagine Evaleen at her writing desk penning The Christmas Porringer (1914) or Our Little Norman Cousin of Long Ago (1915).

Evaleen lived with quiet purpose. She melded the delicate pleasures of nature with a humble and private writer’s life. Perhaps her proclivity toward solitude is the reason she has been overlooked in the history books as a great American writer. During her time, one reviewer said, “There is something particularly exquisite in Evaleen Stein’s storytelling—that indefinable quality of simplicity which is perfection.”