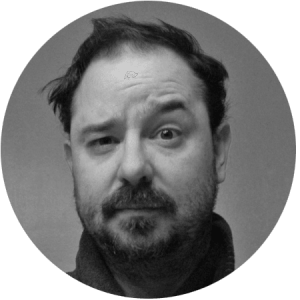 John Scalzi is an American science fiction author and former president of the Science Fiction and Fantasy Writers of America. He is best known for his Old Man’s War series, three novels of which have been nominated for the Hugo Award, and for his blog Whatever, where he has written on a number of topics since 1998. He won the Hugo Award for Best Fan Writer in 2008 based predominantly on that blog, which he has also used for several charity drives. His novel Redshirts won the 2013 Hugo Award for Best Novel. He has written non-fiction books and columns on diverse topics such as finance, video games, films, astronomy, writing and politics, and served as a creative consultant for the TV series Stargate Universe.

We talked to Mr. Scalzi in anticipation of his event to ask about his writing process, advocacy, and dinosaurs.  Join us at the AWM to meet Mr. Scalzi and pick up a copy of his new book The Consuming Fire, a sequel his best-seller The Collapsing Empire, on Monday, October 22 at 6:30 p.m. RSVP here.

What are you reading now? What should we be reading?

At the moment I’m writing a new fiction work, so I’m not reading fiction, primarily as a defensive measure – I start writing like the author I’m reading, and that’s not always a great mash-up, particularly if I’m writing something in an established universe, with its own tone and feel.

What should you be reading? EVERYTHING. I know you’re looking for specific authors and titles, but honestly, just read a lot and read widely, and talk about it too, because that’s how people find out about stuff.

Your blog, The Whatever, is arguably one of the most famous blogs on the internet, and you update it constantly. How have you continued to find content and inspiration over 20 years of writing daily? Do you have any advice for new (or not-so-new) writers who struggle to find that inspiration?

I write constantly so I don’t have to wait for inspiration – writing is a daily discipline. There’s always enough going on out in the world to write about; the point of me writing daily is to keep in practice. It’s like a musician doing scales or the artist sketching. It’s exercising the muscles, as it were.

What inspires your advocacy for diversity in the science fiction community?

The same thing that inspires my advocacy for diversity in general – the idea that every human has the potential to be amazing, and why wouldn’t you work to foster and cherish that, and to break down the systematic barriers that keep them from being so. This isn’t rocket science, or shouldn’t be, anyway.

You write across many genres, including fiction, non-fiction, columns, and even some TV through your work as a creative consultant on Stargate Universe. Can you briefly touch on the differences in your writing process for these various formats?

The first and most important thing is: Ass in chair, doing the work. For fiction, I fly by the seat of my pants. For non-fiction, I outline and make sure I know where I’m going. For columns, I pick the thing that’s on my mind for the day, see if there’s a through-line for how I feel about it, and write that through-line. For creative consulting, I problem-solve and help the other writers find a way to do what they want to do in a way that makes sense.

If you could meet one American author from the past who would it be and why?

Probably HL Mencken, who was an early inspiration and made me want to grow up to be a newspaper columnist. I was one for a long time, and of course the twenty years of blog writing is work in the same tradition.

And, just because I’m curious, what is your favorite dinosaur and why?

I’m going to say Pterodactyl, just so the dino-nerds can wrinkle their noses and say “WELL ACTUALLY THAT’S NOT A DINOSAUR.”

Can’t wait to hear more? Of course you can’t! Get your tickets to see John Scalzi on Monday, October 22 at 6:30 here.