Karl Marlantes is the author of the Vietnam War novel Matterhorn, which has been hailed as a modern classic of war literature. His follow-up to that acclaimed debut novel is the family epic Deep River, from Grove Atlantic, which the Washington Post called, “an engrossing and commanding historical epic about one immigrant family’s shifting fortunes.” The story follows three Finnish siblings who flee from their home country in the early 1900s to escape Russian imperial rule and end up in the Pacific Northwest, where they face new challenges and strive to make a new home.

We spoke with Marlantes via email ahead of his program here with us August 7,2019. Read on to learn more about Deep River, Marlantes, his writing approach, and more.

AMERICAN WRITERS MUSEUM: Your new novel Deep River centers on three Finnish siblings who flee to the U.S. in the early 1900s after Russian oppression takes its toll on their country…did you find any parallels in their story to what we see today in terms of immigrants and refugees seeking safety in this country?

KARL MARLANTES: Yes, many. There is the obvious one that you pointed out: many come seeking safety from oppression. I think, however, that far more come seeking economic opportunity and a better life and future for their children, namely growing up economically secure in a country that espouses the values stated in our Declaration of Independence and Constitution. Even if we no more lived up to these values when my characters immigrated to America than we do today, we still do hold these ideals dear. Many governments do not. Economic opportunity and living in freedom is the American dream that attracted our immigrant ancestors and attracts immigrants today.

AWM: Deep River is set in the early and mid-1900s, a very tumultuous time in America and the world at large. How do the events of this historical period — World War I, industrialization, labor movements — affect the characters of your novel? 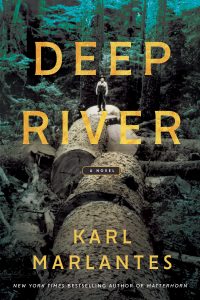 MARLANTES: My characters are thrown into a world of opportunity and oppression. They came from a world without opportunity, so just arriving in the United States of the turn of the last century, they were way ahead of [where they would be] staying in the Finland of the turn of the last century. Ilmari gets what would have been an inconceivable amount of land, for free, because of American homesteading and timber rights laws. Ilmari and Matti eventually own their own small businesses. Getting there, however, they endure hardships that most of us today wouldn’t put up with for five minutes, namely a life of constant, grinding labor for barely subsistence-level earnings. While Ilmari and Matti see their deliverance in achieving the American dream, Aino is more interested in eliminating the oppressive conditions that stood in its way. She, in fact, wants to eliminate the ownership class while her own brothers want to join it. Yet, despite enormous political differences, they still have Thanksgiving dinner together and love each other. It’s a lesson we could all take to heart today.

AWM: This is an expansive novel of the family epic sort — how has your own family impacted your writing?

MARLANTES: I could never have written about the Koski family without having had a family of my own. I saw my children birthed and spent many a subsequent sleepless night. I’ve felt the love for and love of my children and the responsibility for raising them. I fought the battle of “eat your greens” and finding the money to straighten their teeth. Then there is the family of my own childhood. It takes considerable self-esteem to get through countless rejection letters, the occasional idiot bad review, and years of labor not knowing if you’ll ever get published – or paid. I got this self-esteem from the good fortune of being raised by two adult parents of the greatest generation. Finally, there is the family of my grandparents’ generation. These are the people who came from “the old country.” I have their stories. I have their example of arriving with nothing but their capacity for hard work and innate intelligence. That generation also raised the adults who raised me.

AWM: What is your process for writing historical fiction? How much research do you do and does that get in the way of telling the story?

MARLANTES: I started out with stories from my grandmothers and grandfathers and their siblings, my great-uncles and aunts. I also had a lot of stories from my mother and father about growing up in the 1920s and 1930s. I then read a lot of background on World War I, the labor movement, life and times at the turn of the last century. What I found is that it is endless. I will never be “an expert” on the time period. I will never cover even a small percentage of what has been written about the time period. And I am sure I probably got something wrong.

With all that running around in my head, I outlined the novel and went to work on the story. As the story unfolded, I would run into historical issues. For example, when Aino comes back from Chicago, it is very likely that her sisters-in-law would want to know what the women were wearing back east. I’d get on the telephone and talk to a friend who is very knowledgeable about historic fashion and I’d also look at pictures on the internet. To get this little piece of authenticity takes sometimes several hours. I think it is worth it, because it is what makes the story come to life.

Knowing the general history of the times allowed me to construct a story that was plausible, and I didn’t feel too constrained. For example, I had a story from my grandfather that took place during the Finnish Civil War of 1918. I moved it about a decade earlier. Doing so, I had to make sure it was plausible, which it was. My story involves a Russian army camp. I found out that the Russian army was much more prevalent during the First World War than ten years earlier, but it was still there, and there were indeed camps.

“To be a good writer takes talent, time, and hard work. To be a successful writer takes all of that and some good luck.”

MARLANTES: J. D. Salinger. First, he is simply a superb writer with superb characters. I’ve read Nine Stories at least nine times. He’s a combat veteran and I feel we see the world in similar ways. For Esmé with Love and Squalor is one of the greatest short stories about war ever written. He is also a deeply spiritual writer, dealing with death, reincarnation, meaning. These are all things I think about. And he’s funny. I think we’d laugh a lot if we got together. The goings on of the Glass family could make a great modern sit-com.

AWM: What inspires you to write?

MARLANTES: Dharma Bums by Jack Kerouac. It was one of those books I’ve been intending to read since I was in high school. I finished it last week and immediately re-read On the Road. I thought my generation invented being cool and turned on in the 1960s. Seems like there were others before us. So, now I’m listening to A Moveable Feast, by Hemingway. A serious non-fiction book that I highly recommend is Army of None, by Paul Scharre. It is about autonomous weapons that exist now. It is as scary as any Stephen King novel.

MARLANTES: Don’t quit your day job and don’t leave the table. Everyone can be a writer. When you use the phrase “aspiring writer,” that implies a writer who wants to be recognized by others and paid for it, i.e. a “successful” writer. That is a huge difference. To be a good writer takes talent, time, and hard work. To be a successful writer takes all of that and some good luck. It took me 35 years to just get someone to even read Matterhorn. The novel that made the New York Times list in 2010 was essentially the same novel I’d written in 1975. The difference was I finally got my break. I got that break because I never left the roulette table. There were times, believe me, that I thought I was crazy to think that one day the ball would finally land on my pocket. I also must tell a story. Someone asked Miles Davis what it took to become a great jazz musician. His answer was, “Listen, listen, listen.” So, I would add, “Read, read, read.”