Susan Muaddi Darraj is a Palestinian-American writer who has won multiple awards for her short story collections, most notably A Curious Land: Stories from Home, which won the AWP Grace Paley Prize for Short Fiction, the 2016 Arab American Book Award, a 2016 American Book Award and was shortlisted for a Palestine Book Award.

Darraj’s latest release is Farah Rocks, a children’s chapter book series for ages 8-12 that centers on the life of Farah Hajjar, a smart, funny, and brave Palestinian-American girl who loves three things: her little brother Samir, Greek mythology, and of course her rock collection. The result is “a useful window for early chapter book readers and a precious mirror for Arab American kids (Booklist).

We spoke with Darraj ahead of her January 14 appearance as part of our ongoing My America program series. Darraj stressed the importance of young people being able to see themselves in literature, the nuances of writing for children, difficulties growing up as a Palestinian-American and more. Be sure to join us January 14 when Darraj visits the AWM to expand on these topics and share more insights into her writing.

SUSAN MUADDI DARRAJ: I was inspired by my daughter, who asked me a few years ago about why there weren’t many books with Arab and Palestinian girls in them — I was struck by that because it’s the same question I’d asked myself when I was her age. I’ve also always loved reading children’s and YA literature, and I thought perhaps I could take a creative risk and write for a younger audience as a way of strengthening Arab voices in children’s books. More specifically, I wanted to write a series, a way for that voice to carry over into several books. Children love book series — I know I did, as a young reader. And I thought it would be fun to create one that featured a Palestinian American protagonist.

“I hope these kids feel that I’m giving them a hug through the page, that I’m telling them, ‘I see you.'”

DARRAJ: I had a lot to learn in terms of writing for this age group, which consists of emerging readers in grades 2-5. My editor at Capstone, Eliza Leahy, really helped me understand how to structure scenes, how to remind the reader of the way that Farah was feeling at certain key points, etc. In that sense, it’s different than writing for adults. However, in many ways, the writing process is the same. The rigor is the same. The thing about children’s books is that you can never water down the content that may be difficult or filter your themes just because your readers are younger. For example, Farah deals with bullies and she is also a girl from a working class family who faces poverty. Kids know when you are being condescending to them, so you can structure scenes and vary word counts, but you cannot ever talk down to them. I remember reading Judy Blume’s books and remembered trusting her so much because she talked to her readers, not down to them. 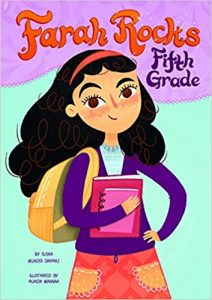 AWM: Farah Rocks is about a “smart, funny and brave Palestinian-American girl”…what do you hope young girls and boys learn from this character and reading your book(s)?

DARRAJ: I hope that kids who are not Palestinian American see Farah and her brother, Samir, and realize that they have a lot in common with Palestinian American children. I hope they think it’s cool that Farah and Samir speak Arabic at home and eat Arabic good. And for kids who are Palestinian- or Arab American? I hope those kids feel that I’m giving them a hug through the page, that I’m telling them, “I see you.” More than anything, I hope that my book serves as a normalization of the presence of Arab Americans in literature; it should feel perfectly natural — not an oddity, not something rare — to encounter an Arab American character in a book.

AWM: Many writers in this My America series have mentioned feeling “othered” or being made to feel like an outsider…have you experienced feelings like this? If so, how have they affected your writing and life?

DARRAJ: I’ve experienced this my entire life, from all directions, in fact. Growing up as a Palestinian American in the United States in the ’70s and ’80s was fraught with difficulty. In the media, in pop culture, Arabs were portrayed, as Jack Shaheen put it, as “billionaires, bombers, and bellydancers.” I remember writing protest letters to a costume company about a mask that they produced called “The Sheik” — it was a horrible thing, depicting Arab men in a grotesque way. It was racist, plain and simple, and it was hard to believe that nobody else could see it that way. During the first Iraq War, I faced a lot of difficulty at school from angry and confused classmates. Furthermore, I struggled because during the first Intifada, I watched children my age confront occupying military forces — this was life-changing for me, a pivotal moment in my awareness, and yet none of my peers cared or knew anything about it. I felt that again in 2014, when Gaza was being bombed, 2,000 Palestinians were killed, but my social media feed was filled with pictures of people’s dinners and photos of their pets. When I posted about Gaza, it made people uncomfortable.

“So that’s the Palestinian experience in America — nobody wants to really talk seriously about the occupation, and it’s disheartening and isolating.”

I will say that things seem to be changing: as a young person, I could never say I was “Palestinian” without inviting a debate. The very existence of a Palestine and a Palestinian people was hotly contested, but that’s slowly changing. And thanks to social media, Palestinian voices and perspectives have a platform. For example, a year ago, I launched #TweetYourThobe last year and it went viral; people all over the world admired an important aspect of Palestinian culture and women’s artwork.

AWM: What inspired you to become a writer?

DARRAJ: I’ve always loved creating new worlds. Writing is very solitary, and maybe part of that appealed to me because I’m an introvert. This is probably an outgrowth of how widely and how much I read as a kid. I used to check out several books from the local library and finish them within a week, then go back for more. My favorite types of books were mysteries, and I specifically recall reading through the Agatha Christie section. I couldn’t read enough Hercule Poirot novels — he’s still one of my favorite fictional characters of all time. My favorite writers as a teenager included African American and Latinx writers, who helped me see how one could articulate a perspective from America’s margins.

“Generosity to me means reaching out and trying to soothe the fears of your fellow Americans — I hope, despite this current toxic climate, that that spirit is not dead. I don’t think it is.”

AWM: What does the notion of “American-ness” or “being American” mean to you?

DARRAJ: I have an expansive view of American-ness. It’s always changing, but at its core, it’s defined by a sense of generosity. Generosity means caring about people and being invested in their problems, even when it’s not immediately affecting you. For example, as an Arab American woman in the United States, I am moved by the plight of others, especially by the fact that we have children in cages at the border, by the backlash against the #BlackLivesMatter movement, and by the plight of Native American and indigenous people. I’m concerned by the fact that LGBTQ students still feel unsafe and unwelcome in their schools. So generosity to me means reaching out and trying to soothe the fears of your fellow Americans — I hope, despite this current toxic climate, that that spirit is not dead. I don’t think it is.

DARRAJ: James Baldwin. Without a doubt. He was a huge influence on me, on how I think about race and class issues, about “otherness.”

AWM: What are you reading now?

DARRAJ: In terms of YA literature, I’m reading Elizabeth Acevedo’s new novel, as well as several new chapter book series by Saadia Faruqi, Nikki Shannon Smith, Andrea Rogers, VT Bidania and many others. In terms of fiction for adults, I love Erika Wurth’s books, and I’m excited about forthcoming novels by Michael Zapata, as well as by Arab American writers Sahar Mustafah and Zeyn Joukhadar.