Each week, the My America blog series will introduce you to one of the writers featured in our newest exhibit My America: Immigrant and Refugee Writers Today, now open. The exhibit is designed to elicit thoughtful dialogue on a wide array of issues with contemporary immigrant and refugee writers delving into questions about writing influences, being multilingual, community, family, duality, otherness and what it means to be American. Check back every week to learn more about these writers and their thoughts on these themes, as we highlight select quotes from the exhibit as well as reading recommendations. For our first My America writer feature of 2020, we’d like to introduce you to award-winning writer/poet/educator Rigoberto González.

Butterflies are important to Rigoberto González. His family is from the state of Michoacán in Mexico, where most of the monarch butterflies from eastern North America spend their winters. It’s critical land for these butterflies and an important symbol that connects González to his ancestry. The butterfly is also important to him in other ways. “I’ve adopted it as a kind of symbol of my own writing, my coming out, my being an immigrant because of the migration patterns of the butterfly, but also because it’s a symbol of rebirth, it’s a symbol of resilience.”

That sort of rebirth and resilience has been a hallmark of González’s life and career as a writer. His mother crossed into the United States when she was pregnant with him so he’d be born a U.S. citizen. “The story is that she simply wanted to give me something,” González says. “And she said, ‘Well, we’re poor, we’re illiterate, we have nothing. The only thing we can give this child is citizenship.'” Then González’s family moved back to Mexico when he was two because his parents wanted him and his brother to, as González puts it, “understand that they’re Mexican first.” And then, at the age of ten, González moved back to the U.S. with his family, just like the back-and-forth migrations of the monarch butterflies.

Today, González is a professor of English and director of the MFA Program in Creative Writing at Rutgers-Newark, the State University of New Jersey. He has written or edited 20 books in various genres and has received numerous awards for his work. As he says, “I constantly write. I write every day. If I don’t write every day, I read every day…I write everything from poetry to memoir, fiction, children’s books, book reviews, essays. I do it all.” This includes the AWM’s newest exhibit My America: Immigrant and Refugee Writers Today, in which González is featured. The following quotes are excerpted from the video interviews that you can see and listen to when you explore My America in person. Plan your visit today!

On Reclaiming Your Self Worth

“I always tell my students, many of whom are immigrants, you really do have some power here. If you begin to feel dejected or demoralized by other people seeing you as less than, then you’re allowing those people, and those voices, and that negative impression to have power over you. So you have to fight that and just turn it around, and ask, ‘What is it that you see in you?'”

“I believe to be American there is a passion for wanting to expand the definition of what ‘American’ is, first of all. There is this need to connect with other people who identify as Americans, understand their journeys and their experiences, find common ground with them, and if there are differences, then embrace those differences. American is inclusivity.”

On Writing for Outsiders 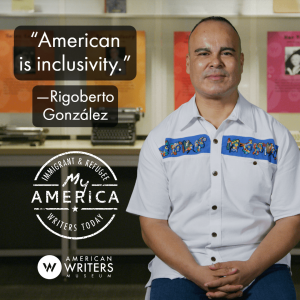 “Any community that is under assault nowadays I feel a responsibility to align myself with them, to stand with them…because we have to fight together. That’s the only way we will be heard. If one of us stands out there and screams, they’re gonna hear one person. And one person is so easy to be ignored, right? But if a number of us gather together and fight and yell and scream and demand then they have no choice but to hear us.”

“My coming out as a gay man had to happen outside of the home…in college I found a very different community, and actually found people who were just like me. They were Mexican, but also were gay or lesbian, and they had the same experience. They said, ‘Well, I can’t really come out to my family.’ But then we didn’t have to be invisible because we had each other. And once we saw other immigrants who also had to go through the same thing we thought, ‘Oh, we’re a community of outsiders even within our outsider families.’ We had to understand so much. We had to forgive so much. We had to tolerate so much. And sometimes that was painful.”

“For me duality is being aware that I’m bicultural, I’m bi-national, that I identify as an American as much as I identify as a Mexican…And that doesn’t mean there is a separation between the two. I don’t see them as excluding each other, as fighting or colliding. They’re actually collaborating. And so that helps me move forward as a writer.”

What Drowns the Flowers in Your Mouth: A Memoir of Brotherhood

So Often the Pitcher Goes to Water Until It Breaks