Each week, the My America blog series will introduce you to one of the writers featured in our new exhibit My America: Immigrant and Refugee Writers Today, opening November 21, 2019. The exhibit is designed to elicit thoughtful dialogue on a wide array of issues with contemporary immigrant and refugee writers delving into questions about writing influences, being multilingual, community, family, duality, otherness and what it means to be American. Check back every Wednesday to learn more about these writers and their thoughts on these themes, as we highlight select quotes from the exhibit as well as reading recommendations. Today, award-winning and “unapologetically bilingual” author Pablo Cartaya shares his thoughts on writing, young people, abuelas and more.

Throughout his life, people have been telling Pablo Cartaya to stop speaking Spanish. When he got to kindergarten his teacher told him they don’t speak Spanish in the classroom, even though that was the only language he knew at the time. Fast forward to graduate school when his advisor told him he doesn’t have to use so much Spanish in his work, he could write something normal. But Spanish is normal to Cartaya, so he didn’t listen.

Nowadays, as a published and critically-acclaimed author he’ll see overwhelmingly positive reviews of his books, but the reviewers say it’s just too much Spanish. Pablo’s response to that? “Oh sweetie, then go to Google Translate and figure it out, because I’m not writing it for you. I’m not. I’m writing for all those little brown kids out there that are seeing themselves in a book for the first time, that can smile and laugh when the word abuela comes because they know.”

Cartaya is of Cuban descent, as both his parents are originally from there. His mother was very young when her family came to the United States with “absolutely nothing.” Meanwhile, his father had a “bit of a spat” with Fidel Castro and spent time in prison. Upon release, he moved to the U.S. and never went back to Cuba. This sort of dual identity — being of Cuban descent but also a U.S. citizen — has had a profound impact on Cartaya: “Who—what am I? You know, I’m neither this and I’m neither that. I’m half of this and half of that. I don’t look enough like this, I don’t look enough like that. And so it’s sort of what I call getting caught in the margins, you know, being stuck in the hyphen. Cuban, hyphen, American. And I’m somewhere in the middle, and I don’t look like one thing or the other. That messed with my identity a lot.”

Much of Cartaya’s writing also grapples with that sense of duality, of being “stuck in the hyphen,” especially in regards to young readers trying to find themselves in literature. Read on to hear more of Cartaya’s thoughts on the themes covered in My America, and be sure explore the exhibit in person to hear even more from Cartaya.

“I’m unapologetically bilingual and I don’t want to silence that side of my voice anymore. I think kids and readers in general appreciate it. There’s an authenticity that comes with it. The multilingualism that I use in my books is a response to how I naturally hear the world. It’s not because I’m trying to write a bilingual book. I’m writing it because that’s how my world is, those are the sounds that I listen to in my daily life. And I have to bring truth to that.” 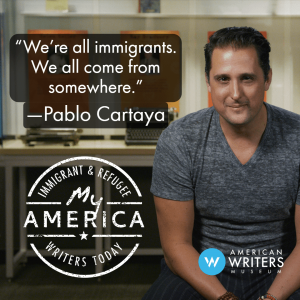 “It wasn’t until I started writing stories that I realized that I am not actually alone, that there are a lot of us out there. And by the way, it’s not just Cuban-Americans, it’s Korean-Americans, it’s Russian-Americans. It’s all of these people that live in the hyphens that are just trying to find a space to feel connected, to feel like they belong somewhere. And I think that more than anything that’s where my stories live. My stories live in the hyphens because that’s how I have experienced the world.”

On Owning Your Story

“I always felt very Cuban inside. I felt very connected to my culture, but I was constantly reminded that I wasn’t…And so this idea of erasure really took hold of my psyche, and I said to myself I don’t want to be marginalized. I don’t want my story to be questioned. My story is my own. My experiences are my own. My voice is mine. And so I went about this life of writing books that are very uniquely mine, that have a lot of Spanish, and culture, and family, and community.”

On What it Means to Be American

On Americans and Immigrants

“[The climate] that we’re living in today exacerbates me, it embarrasses me. And I don’t look and say, ‘What are these Americans doing.’ I look and say, ‘What the heck are we doing?’ And it’s infuriating, but at the same time I am not in any way going to stop yelling and getting angry, and calling people out, and talking about my identity the way that I do, and speaking the languages that I speak. I’m not going to stop that. Do you know why? Because I am an American. We’re all immigrants. We all come from somewhere.”

The Epic Fail of Arturo Zamora

Tina Colina: Queen of the Cupcakes